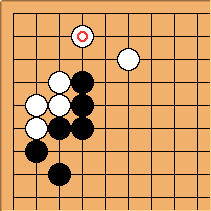 Why the cut is impossible

aLegendWai: I am going to show all possible attempts to cut. If you are unsure why Keima watari can ensure the connection. It is worth reading on. I will show both the correct and wrong responses. So weaker players can avoid the wrong ones. 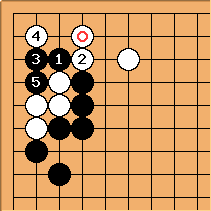 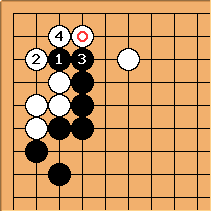 It is the best B can do. 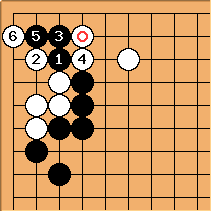 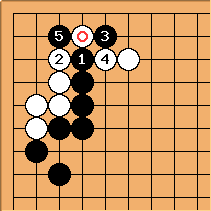 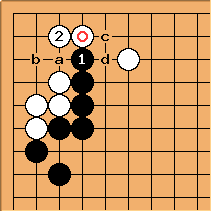 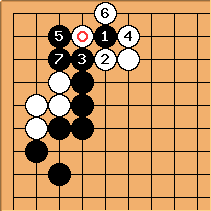 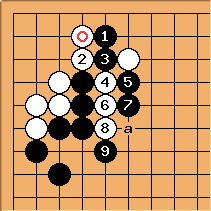 is to try to block B's connection by a ladder. However there's another sure-fire way to ensure the connection.

by a net. It is because

cannot played at "a". 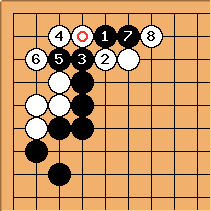 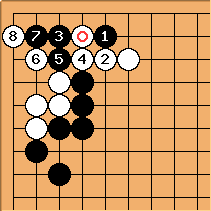 this example turned out not to be an application of keima watari, but of honte; still (or therefore) the discussion has lots of interest; it may be worth moving it to a separate page, like a BQM 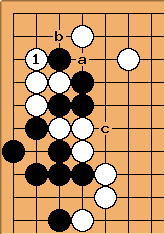 In the third game of the 2003 Kisei, Yamashita Keigo plays 1, applying a variant of this tesuji. a and b are now miai for the connection. If White 1 at a, ... 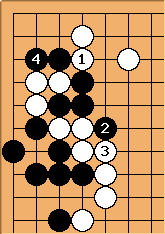 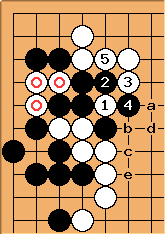 Charles Matthews I see several possible ladders here for White, after White 1 to White 5. If Black 6 connects, White can get parallel ladders with White a, Black b, and then White c, or White d, Black c, White e - and there's more where that came from. Obviously since the marked white stones have just two liberties, a net is a failure.

Or White 1 at 2, naturally, but isn't squeezing better style?

So - all these ladders were broken?

Dieter:Sorry. All ladders work for White. White is very strong in the center. So in this case, her move works. Bad example. To continue: It is beyond my capability to judge the global position for the different choices you mention, I just wanted to point out the local issue.

JanRamon: If white relies on ladders, there's always the Aji of ladder breakers, and any attempt of the black stones to escape is sente because the three white stones can be captured. So in the game white just safely connects and takes territory while blacks center stones struggle to live. 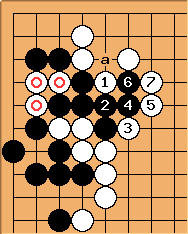 White does not need the ladders at all. Even if all ladders to the lower right are broken, white can capture the black stones easily using this sequence. This is better for white than the sequence in the previous diagrams, because he does not have the ladder breakers to worry about - Andre Engels 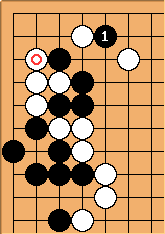 Charles Matthews So, now I'd like to ask what happens if Black plays 1 here? 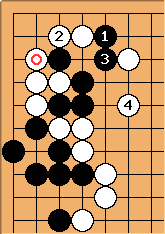 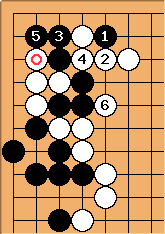 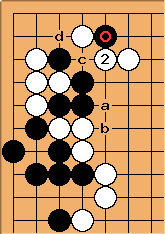 Charles I think White 2 must be correct, but it takes a little reading. The point is probably that Black a can be answered by White b.

Andre Engels: Yes, Dieter's second answer and Charles's answer are correct. After white 2, c and d in Charles's answer are mi-ai, both ensuring a connection. Dieter's first answer is riskier and leaves more aji, for example note that a black move at 4 in that diagram is sente against the three stones below. 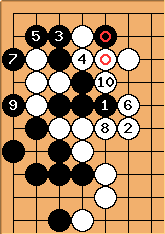 I think I still choose the shape move, though it loses territory. Dieter 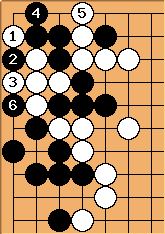 Charles Just to explain a hidden tactic: Black 4 here prevents an immediate atari by White, and Black 6 creates a ko. This is big for Black, but not necessarily enjoyable. 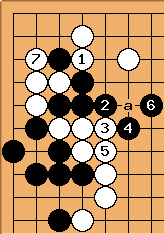 dnerra: I'd suggest this line as a refutation of White 1. Unless white wants to give up on the stones on the left, she has to play 3 (ugh), 5 (oh dear) and 7 (horrible as an exchange with 6). Compared to the game move, white has a little more territory, but black got two full moves on the outside.

(And I don't think White 3 at 4 can lead to a good result if Black pushes at a.)

seems fine to me. Black a is just pushing from behind, and since it was earlier noted that white is strong in the center, this seems like a nice way for white to create a center moyo by attacking a weak group. 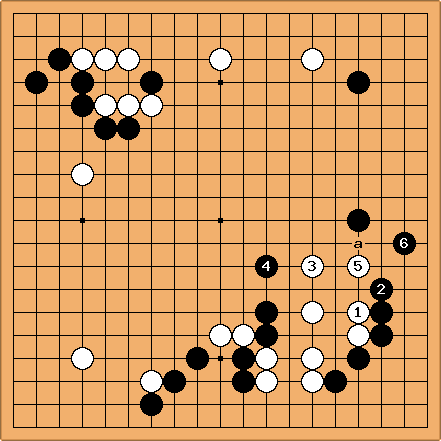 There is some pushing going on.

connects along the side with the keima side connection. The nice thing about this connection is that a future move by white at a is not sente to break the connection of the black stones on the edge. You might say that black "over connects" his stones on the edge to eliminate a potentially useful forcing play for white. In contrast, after this 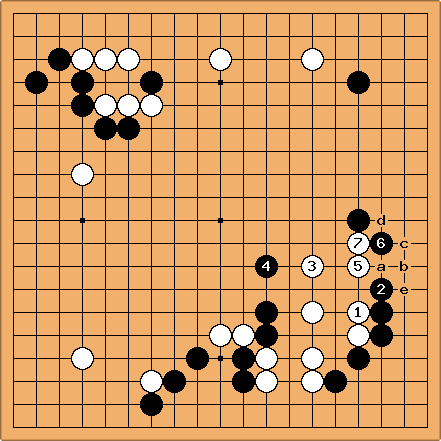 is forcing as white threatens the a through e sequence.