The following is a short comparison of several joseki books based upon a single line of a particular joseki -- the Takamoku, Keima Press and Crosscut line. The comparison may be useful in giving a sense of the different books; it is certainly not comprehensive in scope. The goal of the page is to give a rough idea of the depth of coverage (how many different tactical variations, and to what depth) of different joseki dictionaries. It intends to achieve this by taking a sample joseki and comparing the contents relating directly and specifically to that main tactical variation. On this page, it is not studied to what extent a dictionary explains general go theory; dictionaries having much general go theory are under-represented here.

The joseki selected for this comparison is the line shown

This line does not appear in 38 Basic Joseki.

Patrick Traill: Actually it does appear, but you have to pay attention to the introduction to the 4-5 point, where it refers you to §30 about invading 3-5 at 3-3; in that section exactly this line is treated in diagrams 6,7,8 and illustrated in 12. Interestingly, they say (diagram 9) that the line is playable (up to

) even if the ladder works, while Ishida says one should not enter at 3-3 in that case. Perhaps I shall get round to integrating that here, but I should of course be delighted if anyone else does.

Even Game Joseki devotes six diagrams covering two pages (202 and 203) to this line. The first two diagrams are contained within the theme diagram above.

The book shows that the sequence ends at this point (compare this other books). 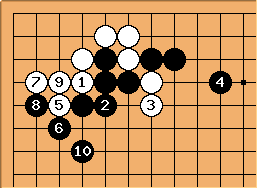 The push by White,

, into a hane at the head of two stones situation is marked as a basic joseki sequence that continues in the next diagram.

With the battle started between the two isolated, but outside, White stones and the three Black stones on the top, the standard sequence ends.

Essential Joseki provides seven diagrams over a page and a half (page 197f) regarding this line of play.

So far, this sequence is identical to that of Model 5 (no ladder) in Even Game Joseki. 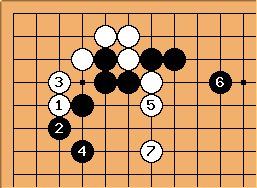 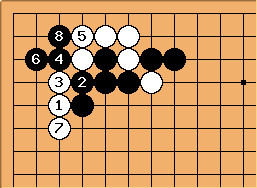 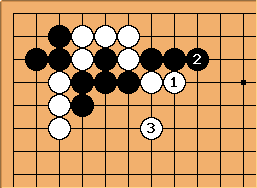 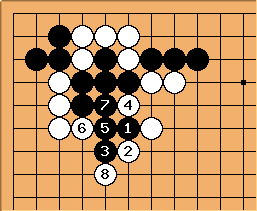 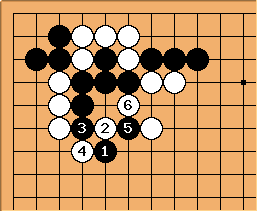 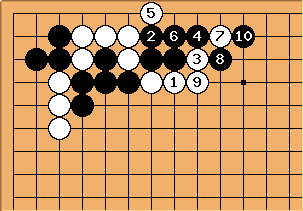 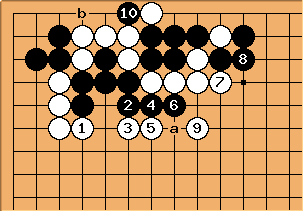 Play continues with White a and Black b. White trades fives stones for massive thickness. This is especially disturbing to Black as a premise of playing the takamoku and the keima press is to develop influence on the outside facing down the left side of the diagram. Now White has that thickness in place of Black.

Ishida Yoshio's Dictionary of Basic Joseki Volume 3, devotes 18 diagrams covering three pages, starting at the middle of page 43, to this line of play.

This diagram is identical to Diagram 36 Essential Joseki but adds the text However, the ladder with 7 can not be favorable to Black or White would not attach in the first place, so this pattern is shown just for reference. Thus, clearly indicating that White's attachment underneath Black's knight's move is would be seen only when the ladder if in White's favor...a statement not found in either Even Game Joseki or Essential Joseki.

Dave: Nevertheless, the 2007 Christmas edition of GoGoD contains 7 games where this joseki occurs. White may decide that the opportunity to play a ladder break in the opposite corner is sufficient compensation.

Diagrams 111 through 117 contain the same information as Essential Joseki diagrams 37 through 42 shown above.

Ishida adds the following information to that contained in Essential Joseki 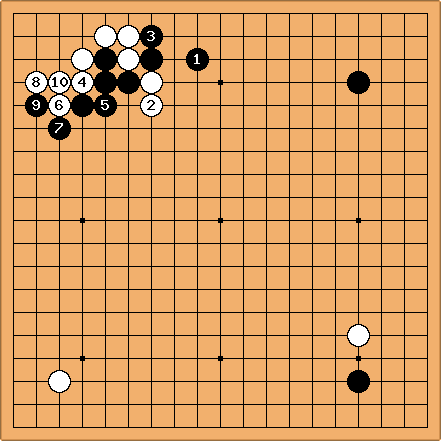 From the 13th Meijin League (1974) between Ishida Yoshio (White) and Otake Hideo (Black).

The ladder was favorable, so White attached. Black answered as shown. Black 1 is a fairly unusual move -- one cannot say whether it or the extension is better. White 2 and Black 3 are natural and the ensuing sequence is probably forced. (numbering changed from original to match diagram.)

is the ugly move seen in Even Game Joseki but not in Essential Joseki. Here it is played in response to Black's descent at 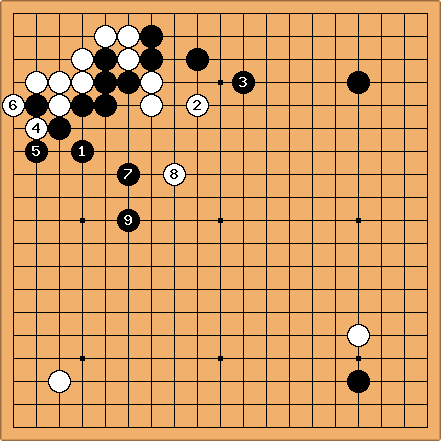 If White does not play 4 and 6, the adverse potential remaining in the corner is unsettling. 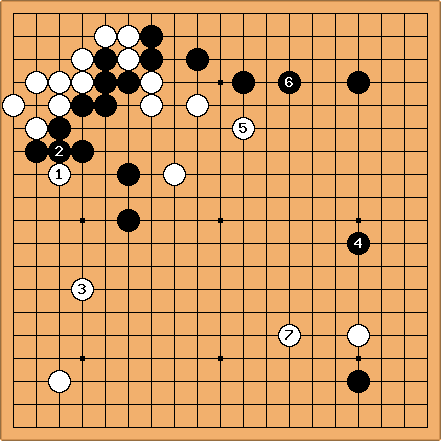 The sequence to Black 2 is a new pattern.

Using this diagram, Ishida explains the thrust into a hane at the head of two stones: White 4 in Reference Figure 10 is an application of the 5-3 point joseki (see page 291, Volume 2). If White simply plays 1, Black 2 is sente as it threatens Black a, White b, Black c, killing White. 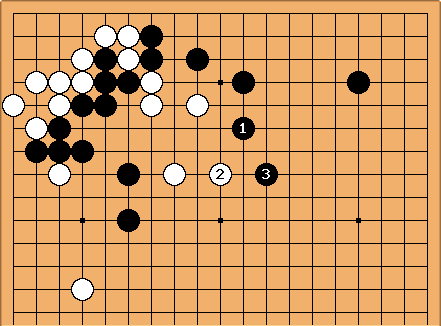 Black 4 in Reference Figure 10 (continued, part 2) was questionable -- I was grateful to play White 5. Black 1 here would have been more disagreeable, as it is the central point of the whole position. if 2, Black increases the pressure with 3.

Thus Ishida concludes his discussion of this line of the joseki.

The 1980 edition of Igo Daijiten is a little different than the above. It includes quite a bit of analysis of lines that do not appear in GoGoD. It covers the theme joseki in 107 diagrams (plus 1 for the theme) as follows: 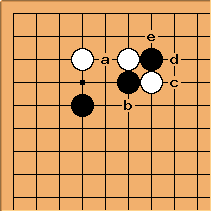 Igo Daijiten shows five(!) responses by Black to White's crosscut. Only a and b have multiple lines examined in detail. 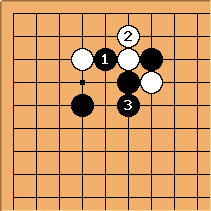 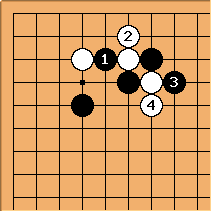 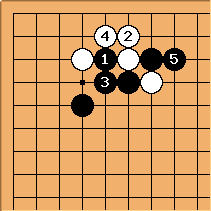 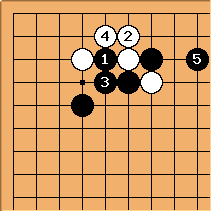 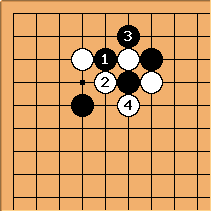 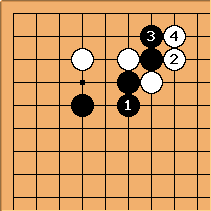 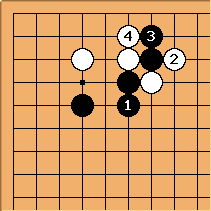 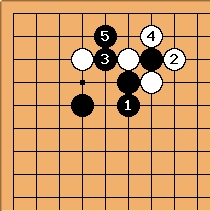 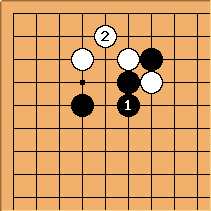 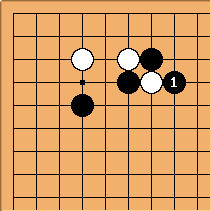 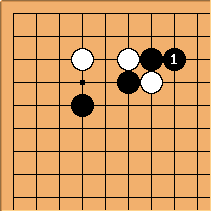 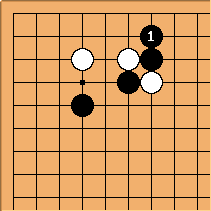 Searching in a games database (2007 Christmas edition of GoGoD) in a narrow corner (includes the possibility of stones as close as the side star points) yields 125 matches as shown here... 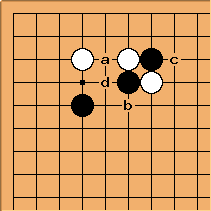 The play at "d" ocurred in an amateur event and was probably caused by confusion with the similar shape when White has played at 3-3 under a 5-4 stone (shift everything in the diagram one space to the left). There drawing back at "d" is a known play.

That leaves "a" and "b". The former is the most frequent choice here and is what appears in the typical joseki books, but what about "b"? This appears in Igo Daijiten but not the smaller books. This is interesting because pattern b2 from Igo Daijiten above appears in no less than 32 games. A pretty good case can be made that this is the current "main line" of the joseki (all the 2007 games in GoGoD feature this line although it first appeared in 1898) and it does not seem to appear in the English language joseki books at all. Oops! :-) 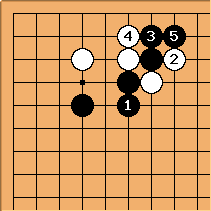 is the main line here and now whether White answers on the right or the left depends on circumstances. This joseki seems to be more often seen in China currently. For example... 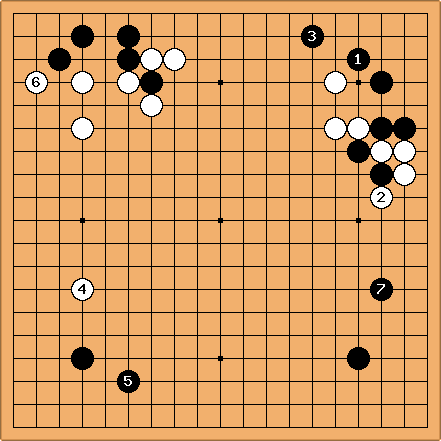