Rakshasa: While reading Segoe's tesuji dictionary i came across 捨て石 (suteishi?). This translates to something like discard/throw away stone. In what ways is this different from throw-in (horikomi)? I assume suteishi is a subset of horikomi. 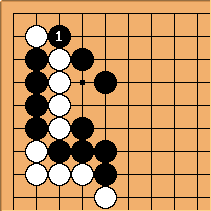 kokiri 捨てる, suteru, is the phrase usually used when stones are sacrificed - eg in the book title that is something like ishi o suteru koto ga dekimasu ka? (can you sacrifice stones) so i would translate suteishi as sacrifice stones.

However it does look like a funny phrase to use for

kokiri of course, but i associate the usage more with sacrifices that have less immediate benefits, such as building thickness, rather than here, capuring stones directly.

Bob McGuigan: I think horikomi refers to a sacrifice stone that is in atari as soon as it's played. It could be removed from the board by the opponent's next move. So a horikomi is a particular kind of sacrifice. As far as sacrifice in general is concerned, for me any stone that is allowed (on purpose) to be captured is a sacrifice stone. Of course sacrifices of territory or influence are also possible, but usually these seem to be called exchanges, or trades, rather than sacrifices.

Rakshasa: The dictionary seemed to be very specific about using suteishi for kind of throw away stones like 1, which comes at the head of a dragon. I haven't gotten that far into the set of problems so i might be wrong. BTW, I got horikomi from ThrowIn, is that wrong? 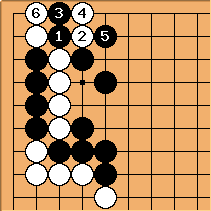 kokiri sorry, my hair-splitting seems to have confused matters - 1) if the dictionary says

is suteishi, then it's suteishi, and 2) Horikomi is right for throw in, but the ho has a double length o the ugly looking hourikomi would be the ordinary way of romanising it.

掘りこむ with a short ho, means something like to dig out, but I'm not exactly sure. 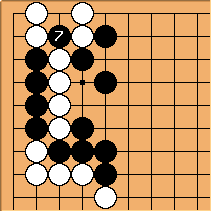 suteishi: stones that are played in order to be taken by your opponent, so as to gain an advantage

horikomi: attacking stones played inside you opponent's territory, for example to prevent a group from making two eyes.

so from that point of view, the move is not a throw in because it's not really in white's territory.

Bill: Well, if a play prevents a group from making two eyes, in some sense it is not inside territory, either. In fact, people use territory in a fuzzy sense.

Anyway, I am not sure of that definition. Nakade would be horikomi, according to it.

kokiri agreed, perhaps it's just a sign that one shouldn't get too hung up on the exactitudes of japanese terms that are really just descriptive, rather than containing hidden mysteries.

Harleqin: I think suteishi are stones that are sacrificable, most notably kikashi stones. Calling a stone suteishi emphasizes that you should not care for its capture.