Baka No Itte (馬鹿の一手[1]), literally The Hand of the Imbecile, is the antithesis of Kami No Itte (神の一手), The Hand of God.

It is part of the natural balance of cosmic forces. Whereas those who seek to improve at Go are striving for Kami No Itte, they are simultaneously seeking to distance themselves from Baka No Itte. Conversely, those who strive for Baka No Itte ... well, ... you get the picture. Other translations of the expression include The Inferior Move. It has been suggested that a most correct translation might be the move whose sheer mindlessness elicits an almost universal disbelief and uncontrollable guffaws in those who witness it (save that of the instigator, of course).

The concept of Baka No Itte has been raised for scholarly review to SL by ChiyoDad who, like all beginners, is deperately trying to move away from this polar extreme style of play.

While there is much debate over the existence of Kami No Itte (see Does Kami No Itte Exist), many Go players often find daily evidence of Baka No Itte. By argument of reductio ad absurdum, this may help prove that Kami No Itte does exist.

Tamsin: Surely the greatest example of Baka No Itte would be to pass on one's first move. What could be more useless than that?

IanDavis: Not true, even professionals have been known to pass during fuseki under the strain of facing a B2 Bomber

MrShin: Honestly, passing on the first move isn't dumb if your opponent refuses to take a handicap. Against this type of opponent it can make the game more even, though sometimes passing multiple times annoys them. :-P

ChiyoDad: Of course, your opponent could also pass, thereby putting you in the same position as before. My understanding is that, under certain rulesets, consecutive passes would end the match. In which case, white wins with the komi I suppose.

Makes you also wonder if there have been any professional games with several passes at the beginning.

Velobici: Well, at that point, the game proceeds directly to the scoring phase, resulting in a game adjudicated as no result.

Kiryoku: I disagree that the above image shows the baka no itte. 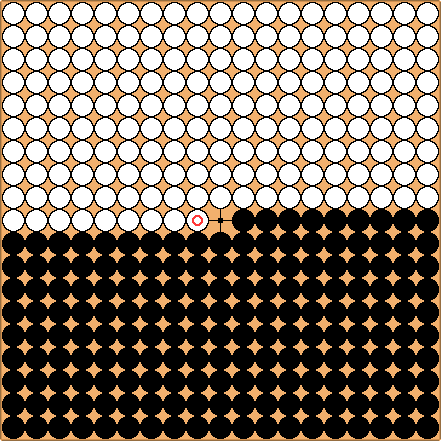 In my opinion, this is a much better representation of the Baka No Itte ;)

RiffRaff: Obviously both of the players in this game were actively seeking the Baka No Itte. But perhaps it is actually a clever sacrifice by White enabling him to later take advantage of Black's bad shape and win the game rather than live only in seki. :-)

XCMeijin: Actually no. Black's shape isn't all that bad. No eyes yet, but a MASSIVE wall. Two eyes will come easily. The only chance white has is if he was playing by Chinese rules, where prisoners don't count as territory.

Guest: XCMeijin is talking about prisoners being counted as territory. when black captures, under chinese rules, he gets 180 points. taking ito account the area he has already covered...

wait a sec. sorry, my bad. Black wins, as stones on the board would count as terrotiry under Chinese rules. Sorry, XC :P

Guest: I'd think BnI would be resign as your first move =.

kevinwm: At this point, black resigns because he is out of stones. White's strategy succeeds!

Here is a very subtle move observed in an actual game: (the context has been altered a bit) 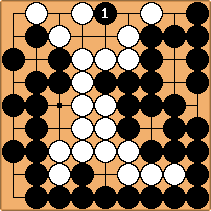 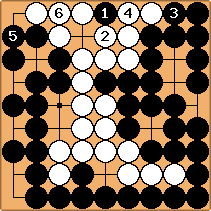 guarantees an eye at its location, which allows White to live with

as shown, Black has 9 points of territory, while White has 2. However, given

If black passed in the previous diagram, Black's score is 60, while white's score is only 6.5, for a 53.5-point win. Therefore the "Baka No Itte" of

is worth -54 points in sente (deiri counting).

Dudzik: While the above is a nice analysis, and I'd be happy to have my name on it, it didn't come from me, though it was made to appear so. This is pretty poor wiki etiquette; when adding to a comment anonymously, please indicate in some way that these are not the words of the original commenter.

To add to the analysis: The reader may verify that only

allows white to live. Omitting this move, the only way black could possibly lose this game would be to play in his own eyes, but white might resign in the meantime, so even that strategy is superior to this move.

Bill: Dudzik, this happens so often that I have taken to putting my name to almost every paragraph I write, unless I am not signing at all. <shrug>

Merk: What would happen if

Dudzik: White is still dead in both cases. The point here is that white is initially dead because the points at

are miai to kill. For black to play one of them will only make white more dead.

is such a clever tesuji because it makes black at

Tim: Perhaps, in most cases, playing in your own eyes is the most imbecilic thing you can do, even if not the most suicidal.

Though, come to think of it, immediate resignation is the surest way to lose (but I still think playing in your own eyes is more "imbecilic").

tapir: This is a nice worst move problem. Even reaching baka no itte is an art...

HandOfHair: This problem assumes that in the initial position shown, both black and white have zero prisoners each, or at least the same number of prisoners. This is highly unlikely, since black has 40 stones on the board and white has only 21. Therefore, white would have had to pass 19 times to have the same number of prisoners as black (under the Japanese scoring rules). Assuming no passes, after the "Baka no Itte" at

HandOfHair: Perhaps this 9x9 board position was part of a larger board? Dudzik did say that the context had been altered a bit.

[1] HandOfHair: I think the most common Japanese way to write "baka" is in katakana (バカ). There are also three different ways to write it in kanji, which are all pronounced the same and all have the same definition (fool; idiot; trivial matter; folly;):

破家, in which 破 means "destroy" and 家 means "house."

馬鹿 (the one ChiyoDad used), in which 馬 means "horse" and 鹿 means "deer."

Don't ask me how any of these make sense.

(Anonymous' input: I believe the second of the three is correct. My Japanese teacher in college told us the story that in feudal times, a city-toff type was visiting the palace of a rural lord, and mistook a deer for a horse (or vica versa), leading to 馬鹿's use as a euphemism for `idiot'. No idea if it's true or not, but I guess it doesn't really need to be true to be a good story.)