I recently played tengen as my opening move, and my opponent responded on the side 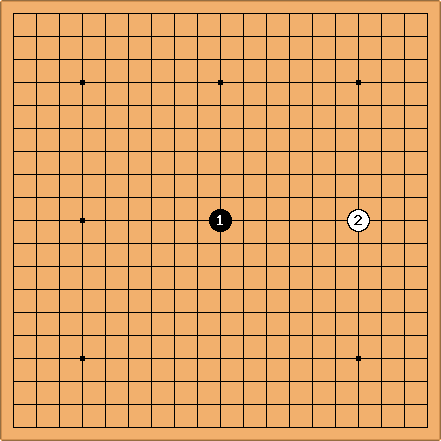 I won the game on time, but I would have lost by about 20 moku. The right side of the board was never really touched during the game, so I didn't get to see the significance of

. Can anyone shed some light on this?

LukeNine45: What strength are you? Perhaps he was worried about a Great Wall opening?

has any special meaning; white is just being eccentric. Do you want to show us some more of the game?

, it would mean, "You are playing unusual moves, so I will, too."

Alex: I'm with Luke. It's like a game of chicken - who's going to back down first and just take a corner like a sensible player would? Anyway, once he's played it, your goal is to make it look bad. Letting him get

is bad because it makes it look like a pretty ideal move, just played in a weird order. You should have taken at least one of those corners yourself, maybe with something like a san-san that would reduce the potential value of his high stone. See below for what I might have done.

Mike N.? I'm only 15k KGS, and my opponent was 11k, so maybe it wasn't the great wall... unless he happened to read about it somewhere and thought I was going to try it. This game was blitz, but my opponent played the first move instantly. 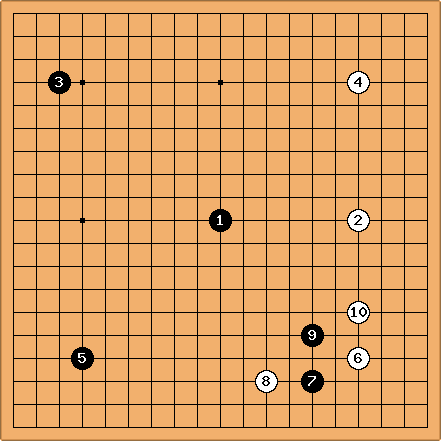 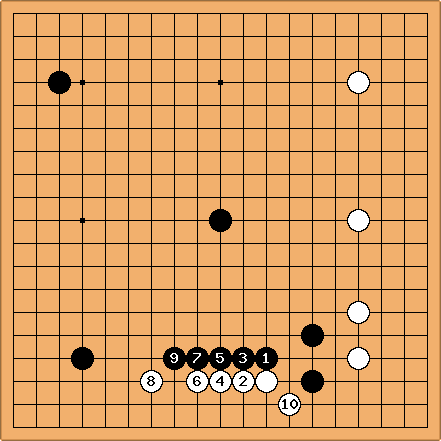 is normally at 3. This is because it's a PushingBattle, and it is very important to be/get ahead. White should have punished you for this, I think with

at 5. This way he would be making territory a line higher. 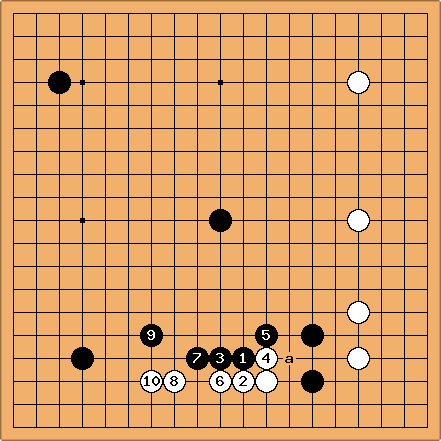 Sojobo: The normal joseki looks like this, though I'm not sure how it finishes with the black stone in the lower left.

You can see that being ahead in the pushing battle is so important to black that he leaves a pretty awful defect behind at 'a' and this is still considered a fair result. 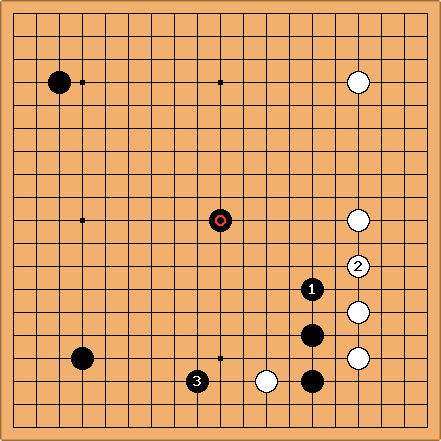 Bill: I think that something like this is worth considering, to get some work out of 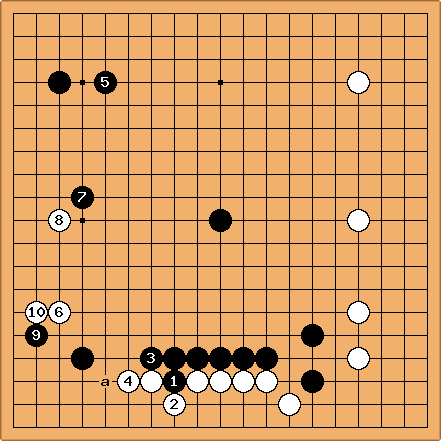 hurts your corner quite a bit, so maybe

. Even so, White only has 10-12 points of definite territory (the whole right side is open), so I think this game is definitely still playable for black.

Sojobo: Luke is spot on. If you imagine 1-4 are not there, then a later play at 'a' for black targets a pretty effective attack at '2'. 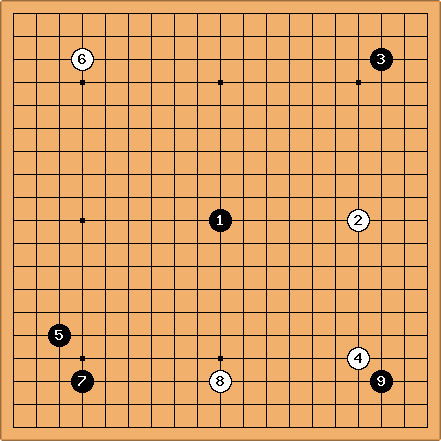 Alex: Maybe I would have tried something like this... after ending the in sente in the lower right, I'd probably approach the top left. It will be hard for White to build a moyo in the lower right with your low solid positions in both adjacent corners, and your tengen stone poised to reduce whatever he does.

Alex: I don't know. I recall someone posting an opening combining a 4-4 stone with a 3-3 stone and when I said it seemed inconsistent, I was corrected and told that it had a certain balance to it and that it's played by pros.

The reasoning I could see for playing 3-3 + tengen in general aren't too different from the reasons I think it works here; the problem with 3-3 is that it tends to cede a lot of influence to the opponent, but having occupied tengen makes it harder for your opponent to develop on a large scale.

Although it usually irks me when people play tengen and think they're being original (yeah, them and the other million "rebels" who open at tengen), I don't think I've ever seen a tengen + two san-san opening played, so maybe I'll experiment with that some time and see how it goes. :-)

Karl Knechtel: For what it's worth, I fully endorse the depicted strategy. :)