Optimal play is play that achieves the best results for the player, given subsequent optimal play by both players.

(Note: This is not a circular definition if play eventually ends, as it does in go, with rare exceptions.)

For a mathematical approach

For a philosophical approach

Bill: Note to Willemien: While optimal play may be perfect in one sense, it is not the same. For example perfect play may also be play that yields the best chance of winning (but cannot be refuted, turning a win into a loss), even if the margin of the win is less than that by optimal play. The reason for using the term, 'optimal', is to distinguish it from other notions of perfect play. :)

Willemien: Thanks Bill, I know we are splitting hairs and YOU are the expert and I not even a deshi of you.

Can you give an example? (I like examples even if it is only an CGT tree )

Bill: No, I am not an expert. I am just reflecting my experience with the terminology. If perfect were not ambiguous, there would be no need for optimal. :)

Herman: Here's an attempt at an example: 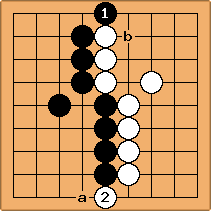 Question: How should black respond to 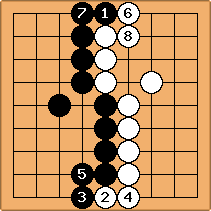 is simple, and leads to a 1 point victory for black 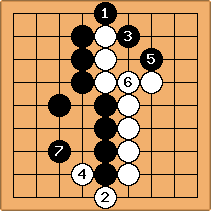 The first diagram might be considered perfect play for black. There are very few variations, and black wins.

The second diagram might be optimal play. Black is likely to win by more points than in the first diagram, because

was sente, so black got first play in both corners. (of course, white might ignore

to further complicate matters). Here, black is perhaps playing optimally, but is also taking a risk...

MrMormon: The idea of taking a risk directly contradicts the idea of optimal play.

anonymous: on the page