A d'ohsuji is a skillfully bad play, possibly the cleverest fatal move to ruin any chance you had of winning. From "suji" meaning "line of play" and "

d'oh," the noise you make when you realise what you've done, either four moves or 0.4 seconds later.

D'ohsuji is the result of misreading a sequence and playing what would be a clever move and then realising it's going to go horribly wrong. It could be summarised with the sentence, "Ah ha, I've got you now you... oh... wait... D'OH!" This page is an attempt to capture such examples, which include:

If you want to practice your d'ohsuji skills there are plenty of resources out there:

Feel free to add your own examples of d'ohsuji and helpful resources above :-)

Naustin- I think this has got to be the funniest page here at SL. I can relate to many of the d'ohsuji. I've finally found a place to call my own. By the way, does the fact that no matter what I try eating while playing, I will inevitably try to put a go stone in my mouth have anything to do with the sicken kakari?

Migeru: I agree, I laughed so hard and long it hurt.

Created by holosys and inspired by a humorous conversation with inimino on KGS.

[1] This can safely be regarded as a d'ohsuji of the highest level. According to a long-standing Go rumor, the first person who succeeds at creating two self ataris at once will be granted free beer by the ING foundation forever.

[2] Any example for a monkey limp? Robert Pauli: How about MFG's performance with black when it battled GoeMate in the

, time was ripe for the eye-stealing tesuji

only evoked Black's mild smile (you won't believe what those computer programs have learned by now), but seeing

this smile suddenly faded: d'oh (and no surprise that MFG lost).

have been immensely powerful?

MrTenuki: This would depend on the rest of the board.

Due to a shortage of liberties, Black would have to make concessions after

(namely, either sacrifice the circled stones by playing

at a or let White cut through).

[3] I don't understand why you call this "Sicken Kakari". This is a clear case of an off-board tenuki. Sebastian -- 2003-09.14 The Sicken part comes after you drink the coffee forgetting the Go stone is in there ;) -TimBrent

I think food and drink related incidents are most commonly tesuji, but not always d'ohsuji (depends on who they distract more). There's hardly been anyone at my club who hasn't reached into a coffee cup for a Go stone during an intense fight (the hotter the coffee, the more likely it is to be d'ohsuji). One person, eating blueberry pancakes, managed to accidentally dramatically slide a blueberry into place and declared it a new tesuji. He was correct, I was so startled by the skidding blueberry and smear streak that everything I'd read out for the battle evaporated from my brain. -madamecp 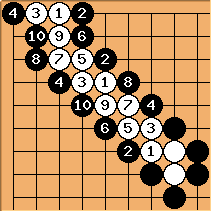