Kgr?: This is a life or death question, I suppose. While playing against a computer (GnuGo) it abandoned a structure that I can't figure out why it's dead. I've tried a whole bunch of variations which all end in white (the computer) making some kind of life in the corner, and I haven't come up with any where it dies completely.

At first I thought it might be a bug, but I can give the structure a lot harder of a time than I realized, so now I'm wondering if there's some tesuji that I have missed.

Here is the position where the exchange started (this is somewhat late in the endgame, or so I thought): 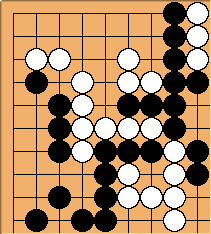 Everything is obviously alive except (maybe) the white structure in the upper left, I left out the rest of the board which is all completely settled and seemed irrelevent.

Next came the following sequence, culminating in (4) with what I thought was just maybe a good reducing move. 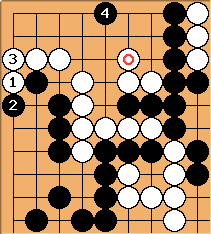 I tried a bunch of variations where I kill everything except something it builds in the corner, but I couldn't find any variation where I killed it all.

Can anyone see what I'm missing to explain white's behavior?

(I hope I've done this all right, this is the first page I've created here)

KarlKnechtel: GnuGo isn't perfect, so that could be your answer. It's also possible that it figured the corner was alive even with another local move by B, and therefore treated B 4 as gote. It looks to me like the whole thing is going to end up connected, so as long as it makes two eyes, B 4 is just however many points worth of reduction.

Note that without the marked white stone, black could jump one space further (see gorilla).

HolIgor: GnuGo does not see a threat. This happens often with computer programs. They can't read positions. Perhaps the group satisfied some criterion like 5 liberties for tactical stability, so GnuGo did not even consider a possibility of death here. 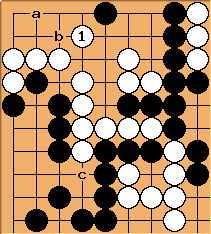 It thinks that the white group is already dead, since it only looks at defending with a, b, or c. After

is added it can tell that white will live.

Kgr?: Thanks everyone. I did forget to mention that the tenuki it played on 5 was a 2 point capture in gote, and aside from this corner there was nothing bigger than 2 points on the whole board. But it does seem clear from what Jesse said that it was a mistake and not some deep reading.

Jesse, I had no idea one could do that at all; it is a neat feature to play with (and I wouldn't have needed to ask here). For those who don't know I found this page, which describes all sorts of analysis of its actions that gnugo can do: