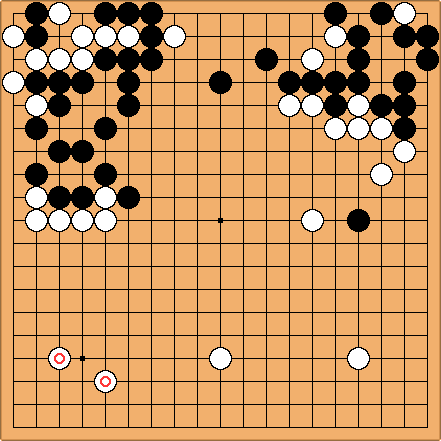 stones). (Although if anyone has a better plan for this position, I'd like to know!)

In the game, I tried: 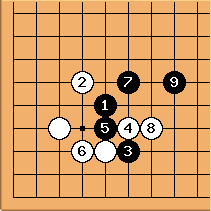 This sequence, up to and including

, follows Sakata Eio's The Middle Game of Go diagram 82 page 22. Here is what the author says: "Going back to the earlier problem of answering the tsuke against the shimari stone, another answer is for White to play the hane-dashi of

. When Black cuts at

. Of course White cannot play this way if the ladder at

(that is, if Black plays

) is good for Black. Please make sure of such relationships before playing in this way."

(Note: I've changed the colors and numbers to fit this situation.)

Unfortunately for me, this is all that is mentioned regarding the white choice of

. Since the ladder was not good for Black, I tried the

sequence. The group ended up living, but I'm wondering if this is the best way to handle such a situation.

Thank you for your comments and suggestions.

Anonymous: This is a very complex problem. When one looks at the position, one can see that White has been completely destroyed on the upper part of the board and Black already has around 80 points there (I assume that some stones were captured). White however has a huge moyo on the lower part which could match Black's territory. Two other considerations: the marked point makes a big difference in terms of territory (if Black plays there first, his territory will be around 20 points larger) and the 3-3 point on the lower right is still open (Black can invade and live in sente).

Another Anonymous: My own personal opinion would be: don't invade the bottom left at all as it is usually agreed that the corner is safe and the wall above is very strong; you'll have much better chances invading the bottom right. Since the top is destroyed, black only needs some small amount of territory or influence on the bottom to have a good chance to win, I think. Then with the bottom right corner, or a wall, try and reduce or invade the centre using the stones at the top..

An invasion is dangerous

I think that it would be dangerous to play at b: it looks to me like an invasion that is too deep.

My first idea would be to play at a to see how White reacts. 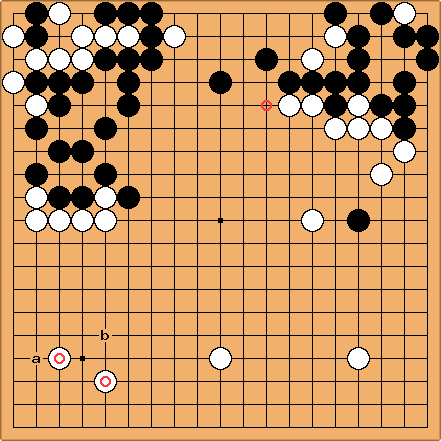 The dangers of invading

(cap) is the usual weakness of the small low enclosure. In the very good book mentioned by Dave, the different variations are deeply analysed. However, one should keep in mind that every position is different. In Sakata's book,

is treated as an erasing move, but here, it is deep into White's sphere of influence so, this is more like an invasion.

Here, for instance, White is much stronger than in the position analysed in Sakata's book and she could try to capture the invasion stone with

. This would be a nasty surprise for Black - he would be subject to a one-sided attack.

Will White succeed in capturing

? Maybe, maybe not, but that is not the point. Even if Black manages to escape, White might build a territory of 80 himself in the lower right! It is not difficult to see that, during the fight, White will probably be able to play moves around the marked points and close the corner at the right moment. 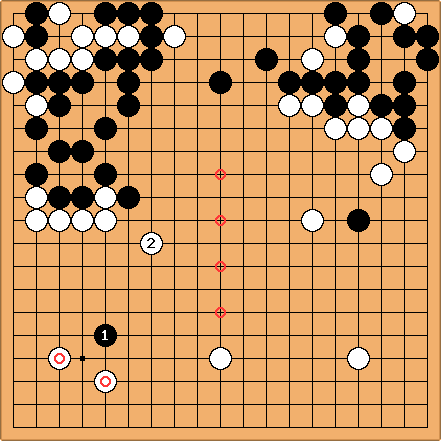 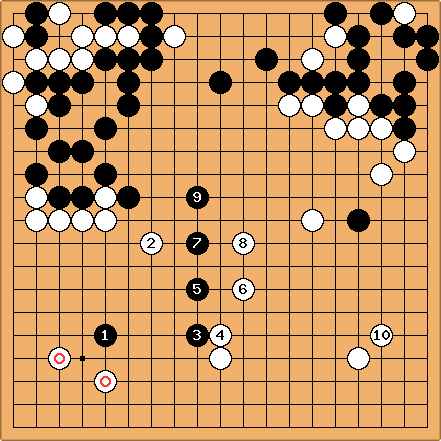 This is a possible follow-up. White builds up a bottom right corner of more than 80 points. This is just an example, White might try tougher variations like in next diagram. 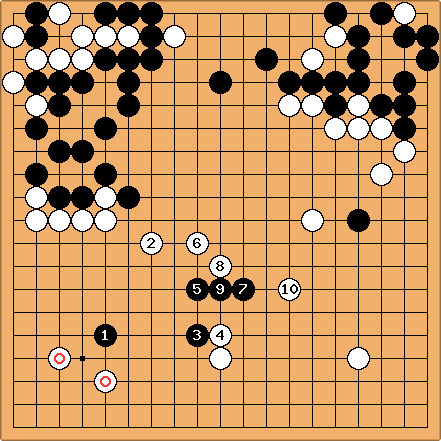 This is a tougher way of playing, focusing on attacking the invader. 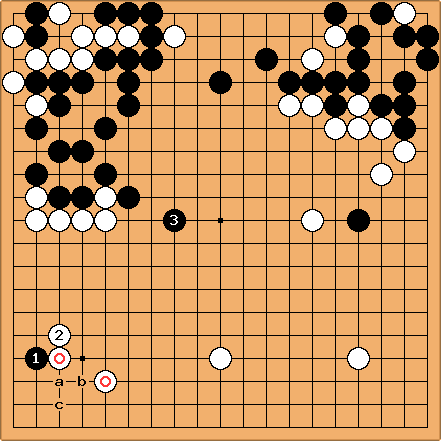 probes White's intentions before deciding how to play. This would be my first idea.

In this variation (there are many other possibilities), White answers at

, allowing Black to live small in the corner. Next, since White opted for leaving no aji on the outside (see the next variations), Black could play at

(note that this move also enlarges Black's territory in the centre). Since Black can live in both corners on the lower side, it is difficult to see how White will be able to match Black's territory.

When White is this strong, can she try to deny Black life in the lower left by answering a at c? -- Matthew Woodcraft

You can find more detail on the page about probe. I think that for White not to play b will leave big defects in her position and she will end up a lot worse off. I haven't tried to read it out, though. --MortenPahle 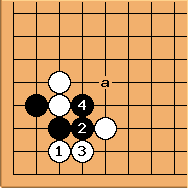 White can force Black out into the centre. Normally, White would not like being split in two like this, but here she is strong on both sides, and Black could be in trouble.

in the previous diagram does make it less scary for Black, though. -- Matthew Woodcraft

--Morten: Yes, but I thought that Black doesn't really mind losing his probe. White's first response shows that she considers the outside important. Changing her mind now and hassling Black in the corner seems inconsistent. Black trying to push at

etc. seems pointless: he can ignore

here and play moves around a to reduce White's territory instead, leaving the aji of his probes. If he ends up losing two stones in the corner (which was not his to begin with) whilst taking a chunk out of the white moyo, he should not be that badly off, no?
I find it difficult in situations like these to assess how strong White really is on the lower edge. Yes, she has influence, but no real thickness. I would consider it quite 'easy' for Black either to establish himself or invade and escape here, especially with the aji in the corner.
Like I said; just my feelings about it without trying to read it out? Maybe I should do more reading and less feeling :-?

in the 'Probe?' diagram, he already lost value on the outside. The compensation was a supposed life in the corner. 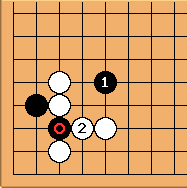 (probably rather later in the game) with the intent to live, then I think the plan you suggest in response to White's attack (play around

) may leave him disappointed. 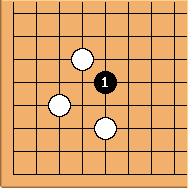 I think I would prefer the second diagram as Black, so I don't think the probe has been successful. 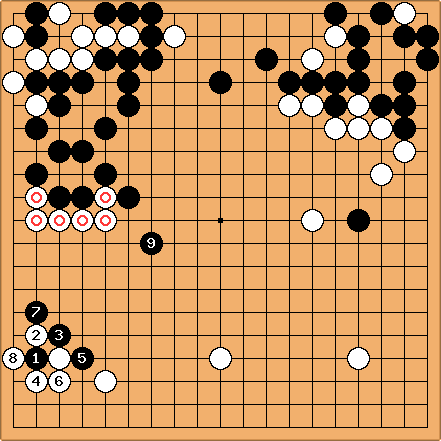 Another possibility is to block at

. This time, the aji is on the outside and Black can add some kikashi. In this variation, Black might play

stones are threatened and that helps reducing the white framework.

Charles The way of playing 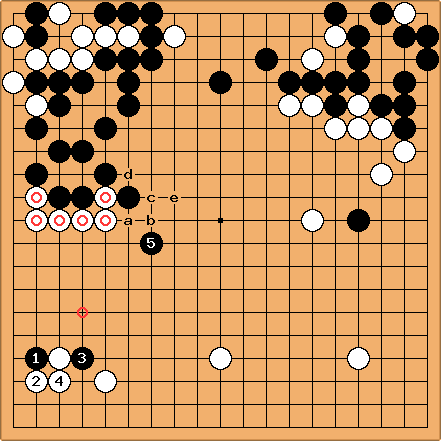 In this variation too, Black creates aji in the lower left before playing

. White can cut with the sequence a to e, but the fight will not be one-sided since White's cutting stones also have to run. Moreover, Black still has a good move at the circle point, which might later threaten the

This is all very nice, but... what if White resists?

After looking again at the position, there might be no time for Black to play the probe move of 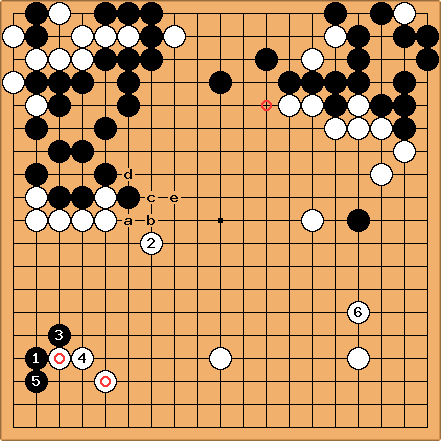 The above considerations show that a play around

is crucial for both players. Black could probably play there immediately and fight if White cuts with a to e. 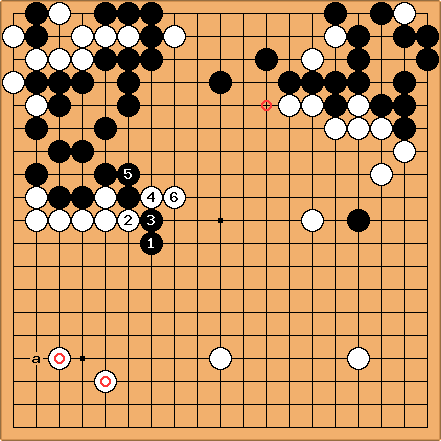 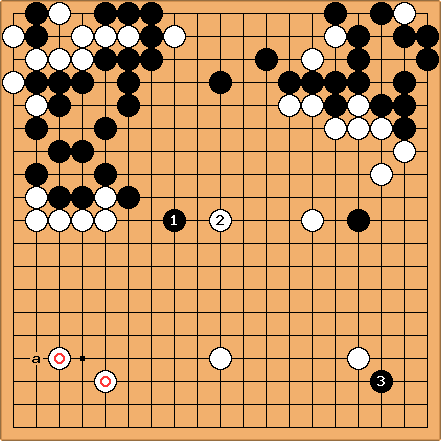 is a calm and solid move aiming at erasing White's framework. I see no way for White to block this in all directions, so this is probably good enough to win the game. For instance, if White tries to build a big lower right corner with

BillSpight: This is indeed a difficult problem. My own feeling is to start with a probe in the bottom left corner. Not that I know exactly where to probe!

Comment on the play in the bottom left (repeated for convenience):

Lin Hai Feng pointed out that one aspect of lightness is flexibility.

puts all the eggs in one basket. The simple stretch on the third line opens up more possibilities. 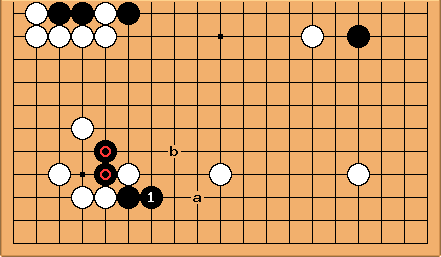 If White blocks at a, Black has a net at b. But a more likely scenario is to sacrifice the 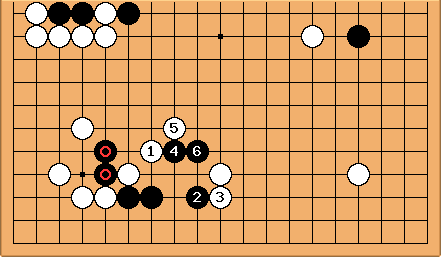 antere: How about entering the white moyo like this? Playing around the shimari seems to be playing into white's thickness; white has the wall and the shimari there. While my variation might not be the ideal continuation maybe play on the right side is better? 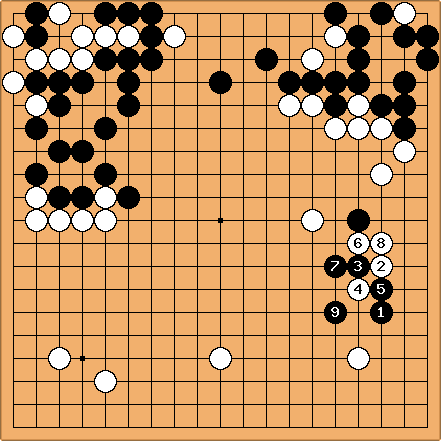 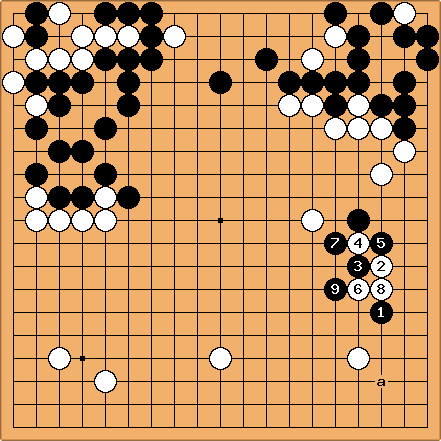 This is probably better for white, but black's shape still looks very flexible. Plus he can still enter at 'a'.

To be brutally honest...

If you are 19k* level, a book like The middle game of Go will only damage your game. Playing professional level moves with no understanding of their content is an excellent way of getting into trouble; this is exactly like learning joseki and becoming two stones weaker. I think in fact you played the best move, the standard reduction for the small low enclosure - but as soon as you didn't know how to continue (Bill's continuation is good) you messed up completely... Now, a real understanding of light vs. heavy play would have helped you - but knowing the first part of some middle game joseki doesn't...