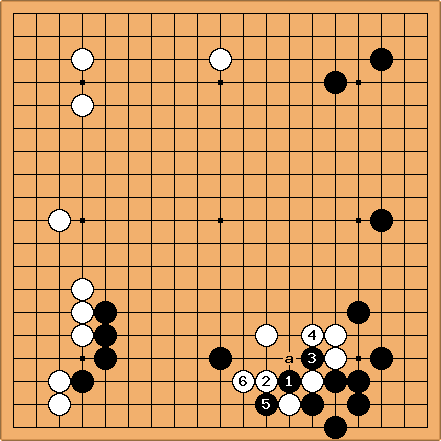 This situation comes from Sakata Eio's book, "The Middle Game of Go", page 15, diagram 53. The author says that

A friend and I were looking at it, and wondered about playing at a.

Thank you for your comments and suggestions.

and that Black replies at

(which is the point where White played

in the original diagram). If White connects in reply to

, she is almost completely safe but meanwhile Black has connected around White's group.

True, the left side is still open; but this is much better than the situation in the original diagram where White is looking to attack the black stones on the left, based exactly on the strength of the stone at

. I think that Sakata is recommending his

because he thinks the white stones are strong. The alternative of a is played with the idea that they are weak. 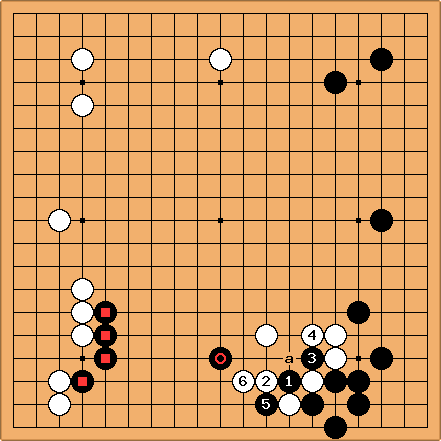 because she doesn't want to be surrounded.

breaks through the black lines and weakens the lone

stone, thus reinforcing the white position. On a large scale, it splits Black's position, and the

I agree with Dave that Black will answer at

if White plays at a, but I don't agree that the white stones are strong as they stand. And White a doesn't strengthen them either. The white stones are in Black's sphere of influence (moyo) and don't have too good a shape. Breaking through the surrounding black position with

does strengthen them a great deal, though.

Another reason why White a is not a good move: if it were, then very likely a would be a good move for Black too. But Black a is quite useless: he can't cut the white stones, because he is short of liberties, thanks to White's nice play at

, as the following diagram shows (starting with

in the previous diagram):

All of my commentary is a mere attempt to grasp the wisdom of Sakata, and should be read critically. If someone disagrees (or doesn't understand, for that matter), please say so.

BobWhoosta: I think the most relevant point to the discussion is that if white a were a good move, black at a would be good as well (my opponent's vital point is my vital point). In fact we find the vital point of the position at