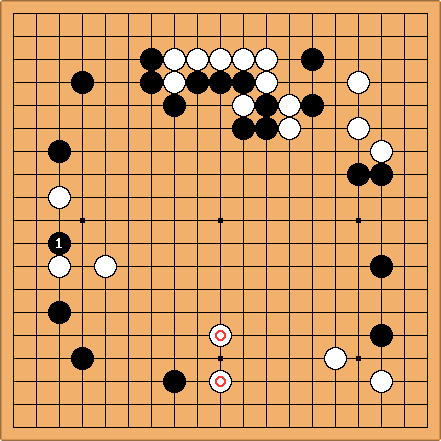 I am white in this game (played last night at my local club, diagram from memory).

surprised me completely. Is this a standard move? What are the normal responses? How should I have responded? 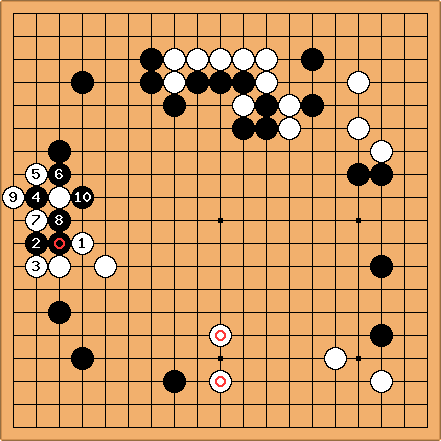 This is how the game proceeded. As you can guess, I lost this one...

(I submitted the game to the GTL, but I'd like to hear what sensei's has to say about this particular move...)

is not standard. Your group is quite strong, but it is in the middle of black's strength, so black would probably seek to weaken your group from the outside rather than strike right in the middle. In addition, the

stones are available to run to so you don't have any real concerns about life for your group.

looks like an odd move - I would wonder what your objective is with the move?

LukeNine45: Ah! I was trying to kill the black invading stones. (It didn't work; I had read it out wrong) -- I was thinking that the whole line was bad starting with

because of how things went. But Notochord's diagram makes more sense. 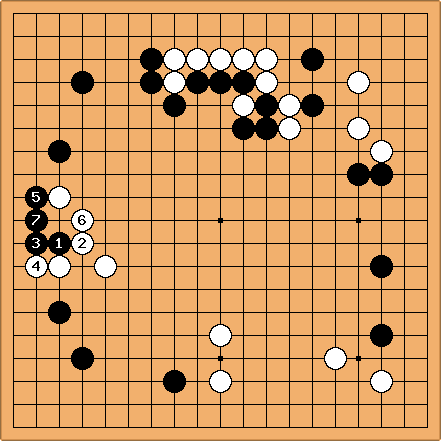 Notochord: I think that you should be fairly happy that Black plays

, but in saving the stone, Black crawls on the second line while you take nice points on the outside. Pressing Black back helps your group stay safe, which is really all that you need since Black is treating your group as an invasion; you added that reinforcing jump out into the center because if you had left things at two stones approached on both sides, you would have likely come under very severe attack; therefore it seems wise to regard this group as giving you benefit just by being safe.

Black is not really getting much bang for his buck from these short extensions if he can't get an attack rolling since hoshi stones leave the corner too open to like extending so short. I think that the diagram is about what you should expect.

doesn't disrupt your shape enough, and

is the vital point of your shape; you should feel quite good at the moment of playing that move. You can harrass "in sente". You've gained a some yose/eye potential from your descent, some degree of center-facing influence which should at least irritate Black, and can later extract a few more kikashi by pushing Black toward the top of the board, though doing so now looks like it hinders the possibility for invasion of the upper left corner. Most important is that I think that your shape is now rather hard to attack. You can probably end in sente here and take a big point (there are many huge ones on the board). No need to kill stones that invade to the second line under a group that has no potential for making much territory, anyway. Moreover, it looks like Black has expended the chance to make a much more disruptive attack starting at

, which can actually threaten to cut something.

LukeNine45: Thanks for your comments! It sounds like I need to think of this type of position a little differently. I was trying to preserve my base still, but I guess it's OK to run through black's potential moyo? Would something like this have been a better idea for black? And one more question: Who is ahead in at the moment? 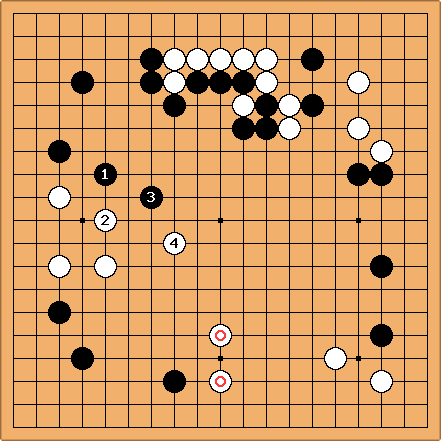 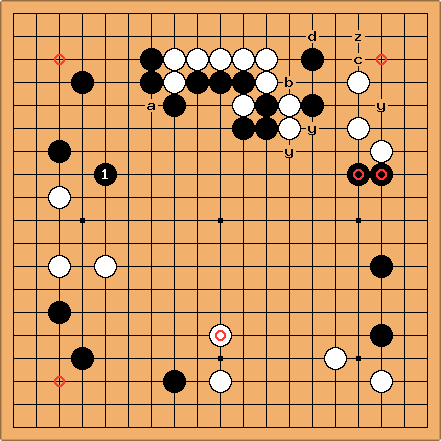 Dieter: I think the stones on the left are fairly resilient, esecially with the marked stone present.

applies not that much pressure on them, but it may be a good move, making territory while protecting the aji of a. The focus in this game, I think, is what will happen with the corners. The upper right deserves a good read. It is hotter than any other region. White has to acquire extra thickness for her top, before invading the upper left. Having the initiative with Black, I'd think hard how to wreck White's top while keeping sente.

, White too can make a solid move there, like c, protecting the corner and creating the option to link with d.

LukeNine45: I'm sorry, there was a white stone at z that I missed. That changes things a bit. :) (Would it have been better to have played it at c?) But that corner did have problems later on-- now I'm thinking that a move around y would have been prudent, as my two stones there turned out to be short of liberties. But I didn't want to help Black strengthen

dnerra: Yes, c is better than z. The reason is that with the two peeps at y and 3-3, it is very easy for black to create a living group in the corner.

If you don't want to strengthen

, then you should have thought about that earlier -- I suspect that you played the diagonal move attaching the stone on the third line, which is very often a bad exchange:

gets very strong, and White hasn't really secured his terriotry (because of the move at y).

LukeNine45: That's exactly what I did. What would have been a better response? I hate making that move but I haven't found a better one. :(

About attacking the white stones on the left: I think there still is attacking potential:

LukeNine45: Wow, the white stones look almost dead after that-- should white run after 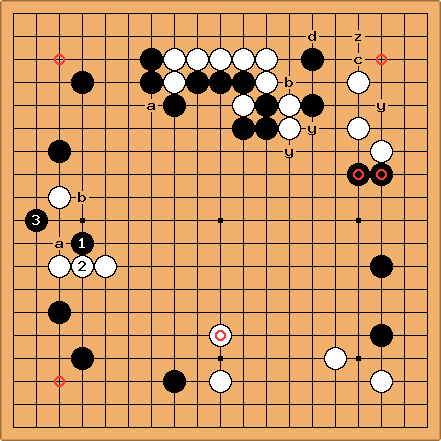 is a very good followup if White connects against the peep. If White resists at a, then Black can continue to strengthen his top at b. 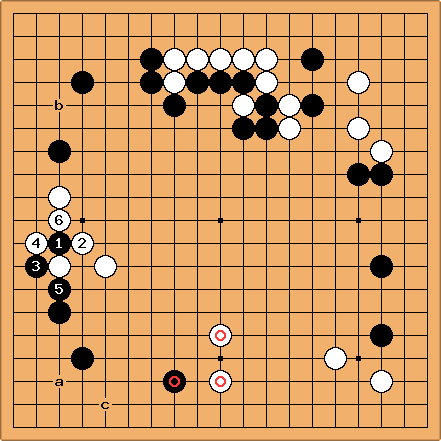 Alex Weldon: I think there may be some value in

is the most natural response, but if White responds this way, Black can try

. If White wants to hang on to

, B gets to force at

. Because the White group was already strong, Black doesn't lose much by playing this way, while

presumably help a little if White later invades at a. If White does something other than

, Black can be satisfied with having the possibility of connecting out later and leaving White without a base.

dnerra: In my view, this sequence is serious aji keshi. Becoming 100% alive here makes it very easy for White to invade at b. Also, the lower left corner isn't territory yet either: For example, White could probe at c. If Black encloses the corner, White can suddenly seriously attack the marked black stone, again because he has no worries at all about his top group.

LukeNine45: But doesn't that help white live there? Or are you saying that it's ok because white's group is strong already? Thanks for your comments!

Alex Weldon: Yes, I'm saying that, although a two-space jump without a move towards the middle is attackable, once White has made the additional jump out into the center, the group is more or less alive as it stands, unless Black was to get very strong all around. The best Black can really hope for is to get a forcing move or two in. The loss for Black in the sequence I suggest isn't that White settles his group - it was settled already - but that White gains a bit more influence towards the center with

, and Black loses other potential forcing moves... so before playing

, one should be sure that

are more useful than the other options (such as

). In this case, for instance, one must weigh the lower left corner vs. the moyo above.

Karl Knechtel: Looks to me like you've more or less got it. I think that in general, the key idea for responding to this kind of move is flexibility - with this many opponent stones around, you can't expect to get everything (i.e. prove it was a flat-out bad move), but you'd better hold on to something useful coming from that 2-stone investment.

LukeNine45: Thanks again to everyone who contributed! It's been quite instructive. I'm now thinking quite differently about these positions... :)