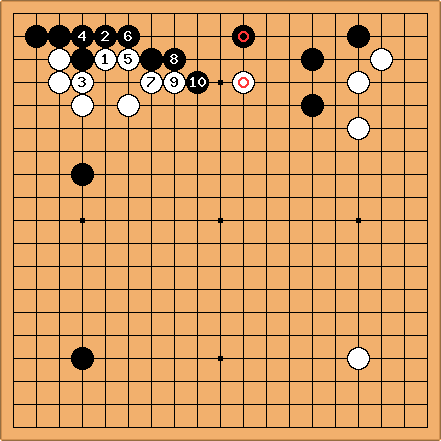 It happens that both players read out the same sequence and are equally happy with the result. Here I was White. I hoped that Black would answer at 2 here - which he did - and not at 4 - which I only realised after having played 1. I was happy to be able to play this sequence: in my opinion, Black gets a rather low position while White gets a "magnificent thick wall". Moreover, the marked exchange looks submissive for Black. 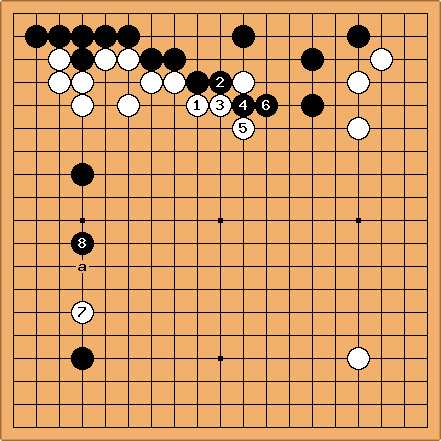 However, in the post mortem analysis, my opponent (3D) said "I don't like the way you play with White. It is way too slow". Now I agree that White 7 had better been at a. The way I played, Black easily dodges the attack and my acquired influence amounts to nothing. He thought it was slow regardless. I am willing to accept this, but I do not feel it that way. 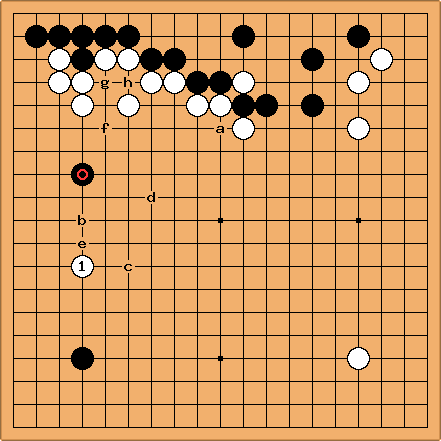 Maybe it is slow because Black gets 30 points of territory and there is still a cut at a. Still, I would not hesitate to play this way again. Isn't White playing on a much larger scale ? Is White's thickness really worth so little ? Isn't the marked stone too close to the thickness ?

If his criticism is correct, this must be a very wide gap in my understanding of the game. How do you feel about it ?

dnerra: Interesting position. Before trying to make a judgement, I will scatter some remarks.

I think White 1 is still too far away from the marked black stone. After Black b, Black has more of a base than White, and will not be behind running into the center when the follow-up is White's ikken tobi at c and Black's horse's head shape at d. Why not play at e or even b?

Let's have a look at the white wall. Unlike DaveSigaty, I think the cut at a is an issue. Further, I think Black can get a peep at f: If Black starts by testing at g. I don't think White can do anything but connect at h?

HolIgor: The final diagram looks like Black played at the head of two stones. It is low in the top left corner, but where it becomes the fourth line it is dubious.

Ishida thinks that White should not play 3-3 stone but rather jump one more time and then play a pincer. Then the fight would be equal. But Ishida does not know that there is a catenaccio joseki on the right. I have to agree that the 3-3 stone and the following pull back only solidify Black in this position; and don't yield eyes. It is rather heavy.

I have to admit I don't know what to do with the white stone that is cut off by catenaccio. No idea whatsoever. Usually I abandon it. 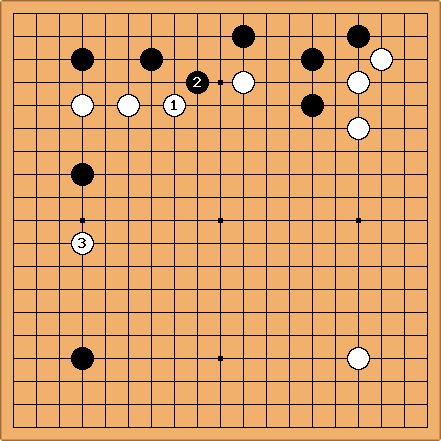 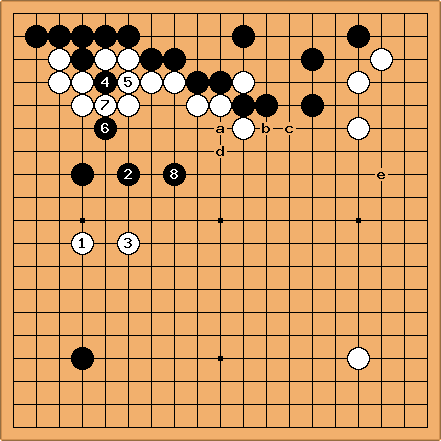 dnerra: This would be a straightforward follow-up. Now the cut at a definitely becomes an issue. Maybe White could now play b-c -d?

I am not sure which side I would prefer. It's mostly a question of how good the white wall is. And the defect in Black's position that DaveSigaty pointed out is indeed annoying, because Black wants to play at e or something similar as soon as possible.

DaveSigaty: I think that White should be very happy with this situation... 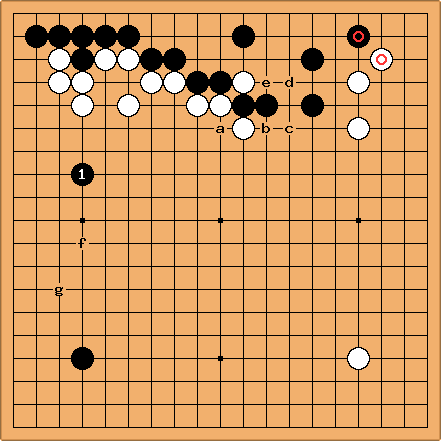 After the top develops as it does, I think that Black should regret the exchange of the two marked stones in the upper right. He would much prefer having the 3-3 point still open. White will inevitably make some points in the upper right now so this has to be added to the value of her wall in making any comparison to Black's 30 points.

The cut at a seems relatively small. Notice also that White can push at b. Black cannot answer at c because of White's placement at d.

dnerra: Hmmm, I overlooked this. However, is it really so bad for Black to resist with c, planning to answer the placement with e? This sequence might make the cut at a worse for White.

If the top developed without the pincer and then Black had the choice of where to play next, would he play 1? I think that if the choice were available, anyone would prefer to play further away from White's wall.

dnerra: That is evident. But if Black 1 was further down, say at f or g, then Black's position would be clearly superior, wouldn't it?
DaveSigaty: Your reference points have been left out of the diagram, dnerra. Can you add them?
dnerra: Oops, added, thanks. 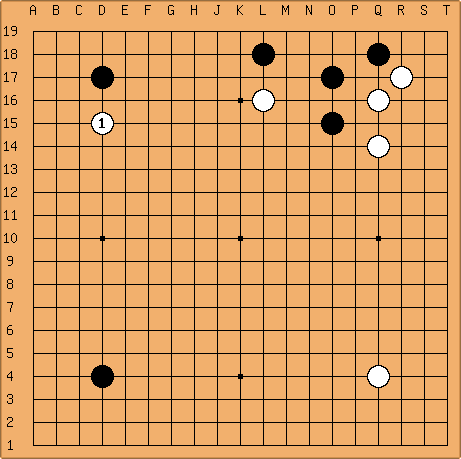 Assuming that it was here that Black chose to play a pincer, I think that this was a mistake. Playing low along the top is not interesting when Black has already played a low move at L18. I do not really see an interesting approach for Black after 1. 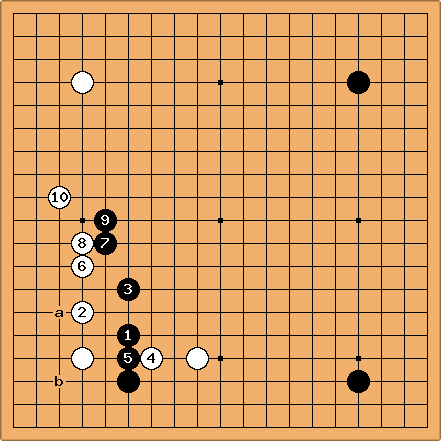 Here is the only example I could find of a professional as Black playing the one-space jump in this position (final result was B+R). Black more often plays the double kakari at a or enters at b. 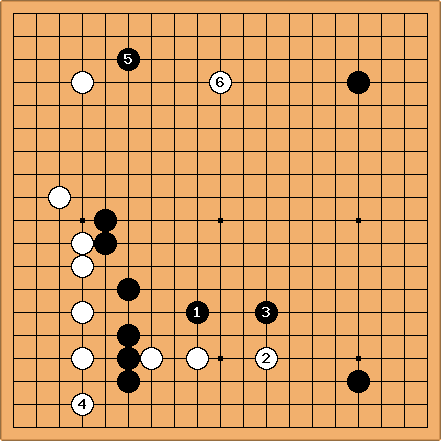 AlainWettach: I tend to agree with Dieter's assessment that the sequence is good for White. Bear in mind that Black didn't get 30 points, but maybe half of that since he already had two strong groups on the upper side. I also agree that White didn't play the best move after building her "magnificent thick wall". 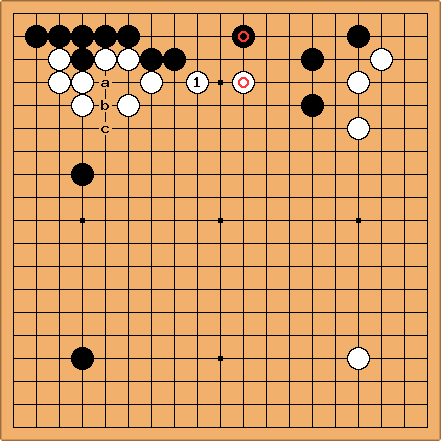 Apart from that, I would prefer to play 1 here than the move played in the game. Also in dnerra's variation, you shouldn't take for granted that White will answer Black a by saving the two stones and allowing an extra peep at c. White should of course discard the two stones at this stage of the game. 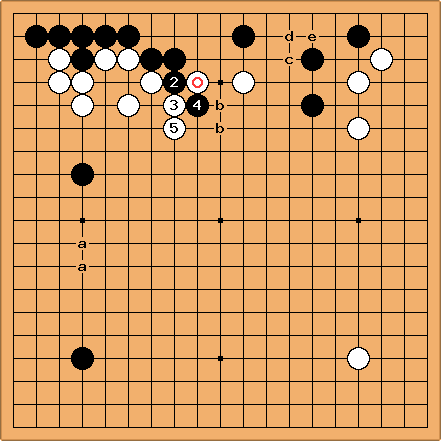 Charles Playing the marked white stone seems quite attractive, in that after Black's immediate cut with 2 and 4, White 5 sets up a and b as miai. But there is an aji question or two here.

White c is an interesting play in this position. If Black answers at d then White's cross-cut at e is troublesome. Therefore one expects Black to answer at e. That means some chance for White to push down with d. White ought to respect this aji, and not simply cover it up by pushing. 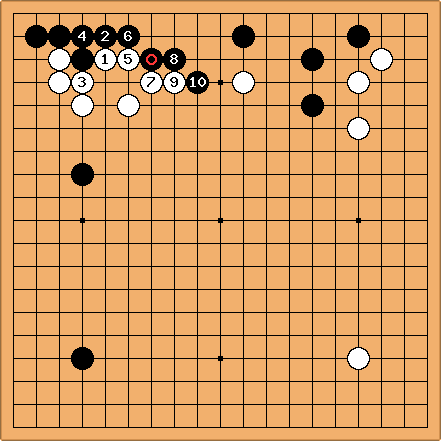 Bill: White 5 and 9 look dubious, as they make the marked black stone and Black 10 nice plays. 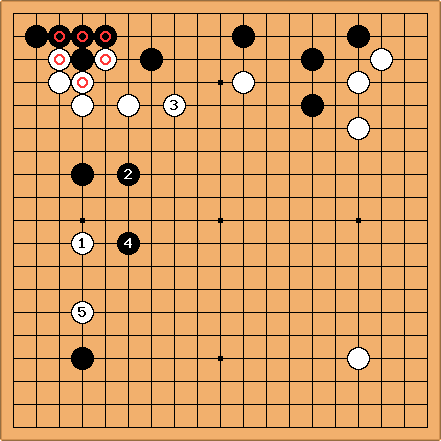 How about the pincer at White 1 now? After White 5 I like White's game. Black is terribly low on the top. The three marked B-W pairs make that obvious.