tapir: In my personal experience (vs german, swiss players or on kgs, high kyu - low dan range) there are a lot of joseki that are en vogue in amateur circles while others played even more often by professionals are not used at all. Is this the same in your part of the world and at your level of play?

Addition: I recognize the second joseki is not even shown in Sensei's Library! Are we the culprit? (While complicated variations of the first one are.) 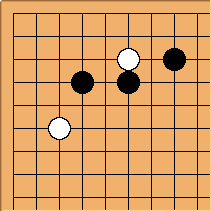 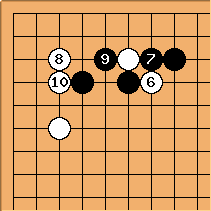 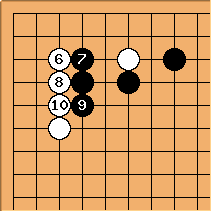 ThorAvaTahr: You are right! Interesting. This joseki is more popular (or at least more frequently seen in pro games), and has been more popular each year for the last two decades. I haven't seen it before though.

Dieter: I'd say, let's add what's missing. About joseki, well, I guess people by now know what I think of them, in terms of amateur development. Joseki are emanations of good technique and strategic principles, with the addition of the special properties of the corner. The subtle differences between, for example, the inward or outward turn of the large avalanche are food for 6 dan players. It doesn't hurt to try and understand, because it gives you an idea of how deep analysis of Go can be, but it doesn't give an edge in a game between plain amateurs. What's really important is to understand the thinking behind any sequence, with its benefits and drawbacks. Let's consider the two diagrams you presented: 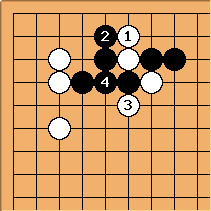 White has made a stable group in the corner and avoided being shut in. Black has a stable, even thick group at the top with central influence. Black has sente. Black's thickness is not quite complete, because White has theaji of

, Black's responses inside make him lose a bit of the outward influence. 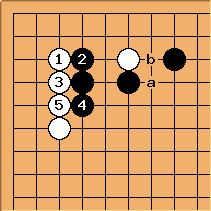 Basically, the result is the same here, but the fact that White has omitted playing at a gives her more options, like playing b to connect to a neighbouring tsume.

Trying to understand these subtle differences, which I do not claim I do, is more important than resolving to Joseki 2 because it is more popular with the pros, which I do not say you suggest! :)

Tapir: I wrote elsewhere what I think of the constant discouragement of joseki study. You will never understand subtle differences or even the meaning of moves if you stick just to sequences you happen to know or making them up on the run to forget them instantly afterwards (not that you do so, but we have so many pages explaining why not to learn joseki here on SL, this may well be the result for some learning from SL).

My claim is amateurs often prefer the fancy sequences over the simple ones all the while they often stick to their limited repertoire of fancy sequences forgetting the rest of the board in the meantime. That is usually they know the large avalanche but have no idea how to play to get sente after the opponent plays a 33 invasion. Look at

in Joseki 2, how many amateur players do you know that would play there (instead of descending, which is of course an option)?

But let us add the missing. What are the differences? I believe the main difference is: With the hane etc. unplayed the black group is much more approachable from the upper right, because the approach has a good follow up with b. That is I would prefer Joseki 2 as White, when there is a white stone from which you can approach nicely in the top right corner. (Little database research indicates this might be professional thinking as well.) Also, having more options is probably desirable in general. (Of course Black can play differently closing White in the corner and this should be considered as well.) 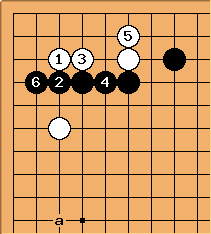 Uberdude There is a big difference that's not been mentioned about not exchanging the hane for the cut but invading at 3-3 immediately: it gives black the choice of which side to block. So if white decides linking up to the double approach stone is a favourable direction for him, the hane for cut exchange can be seen as making sure black follows that choice (in fact black can choose other variations, but they are complicated). If the 3-3 is played immediately black might block the other side (usually best if he already has a stone around a). Note that after

black can also wedge at b and

is also one of several choices.

tapir: Sure. Still I believe it is not avoidance of complications on part of most players. Both variations are relatively easy after all (I know a player, who knows the complicated version with resistance after the hane, but probably hasn't seen the easy sequence 2 given here or would ever contemplate to play it.) Similarly on SL pages. It may be a lack of flexibility sometimes. You don't want to allow your opponent any choice at all.

I personally don't know fancy stuff at all. Still I am able to add to Joseki pages here, because often the simple stuff is lacking, here as in the minds of many players.

Uberdude Joseki 2 does appear on SL: 44PointLowApproachOneSpaceLowPincerLowDoubleApproach. I easily found this using systematic joseki, maybe deleting them is not such a good idea =).

tapir: You would have found even easier by the board search on the left. In fact, I edited that page before I created this BQM, it shows the direct jump in the corner, though not the joseki 2 given here (its existence is indicated only in the text).

Anyway, it was but one sample of closed minds of the amateurs at least I come across. Even more striking is the low approach, high approach to the 3-4 point, while in professional play the low approach is still very common, it is rarely played by amateurs (my experience high kyu - low dan range), it becomes even more strange when people play into complicated joseki lines waiting for a single mistake or trying a certain trick play but forego any other choices they may have there and often are not aware of it or don't know the follow up but hope their opponent is intimidated. 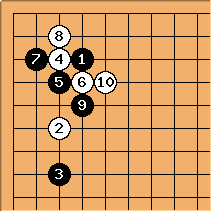 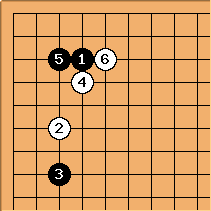