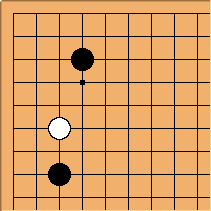 Tapir: From a game played yesterday. I played this approach early in the game, later Black got sente to pincer. As Black was strong along the left side, I didn't want to establish a small but strong group on the top side starting with the 3-3 point (I had a strong but low group on the top right corner already) and tried the following... What about this idea? Totally wrong, good try, major variations missed? 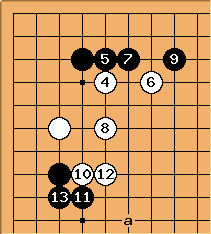 Tapir, can you show more of the board? What kind of moyo on the left are your trying to limit?

Tapir: A largish, thick black wall (with eyes) from which the pincer is a nice extension - so nothing you want to play an invasion against. After a it got pretty small, without a it would have been huge. 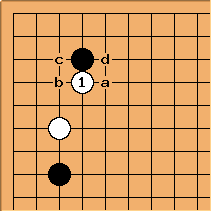 I think the usual idea is to play the attachment

when you want to avoid being locked into the corner after the 3-3 attachment. All of a-d are possible follow-ups, with a being the most common. 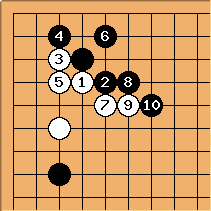 This is one common joseki after the hane at a.

Tapir: Does not Black has the choice to close White in, by atariing

instantly is more common, but still not easy to close the side or center for Black. 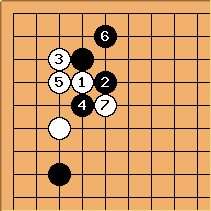 Herman: Yes, that is possible, though very rare in pro play (1 game). White will cut and fight 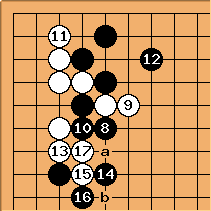 Herman: Here's the only continuation I could find in pro play. 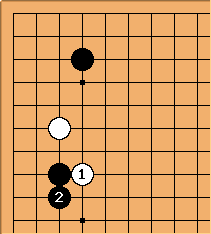 Another idea is to play the attachment on top of the pincer first.

is the usual response, but may be a bit low and slow in the face of black's wall. 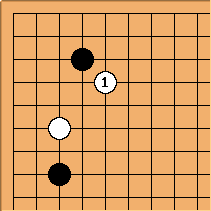 That said, I don't think there is anything much wrong with

The follow-up seems good for white, perhaps Black should have been more aggressive, black can push through and cut, after all, so his move seems a little submissive. 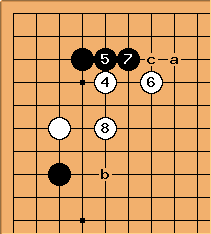 (a). This move looks low and slow, particularly if black is trying to build on the left side. White's shape looks strange to me here. Maybe black should play at (b) instead.

Tapir: If White gets c in sente this is huge, isn't it? (There is a cut, but it would force White into the moyo, so the cut is not really good for Black. At least that was my reasoning.)

Andy: Depends on what's on the top doesn't it? White's dropping stones on the board, he's going to get something. :)