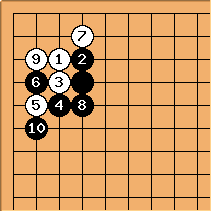 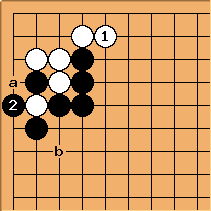 in this diagram really necessary? It seems to me that the worst that white can do if black neglects

is exchange white a for black b, which is definitely endgame. So early in the game, I would think that black could benefit greatly from taking sente by playing tenuki. 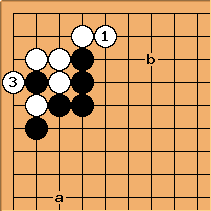 as an extension (around a) and maybe have the best of both worlds?

Also, **I think** (but am quite possibly wrong) that

in your diagram means white eventually needs another move here to live for sure (either around b soonish or in the corner laterish). 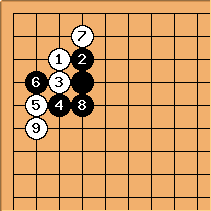 LukeNine45: But if black were strong in the lower left, wouldn't white be better off trying this to nullify it?

Therefore, in your diagram black is probably not strong below, and hence needs to make his group strong.

Now a dan player can tell you how I don't understand the game at all. :) 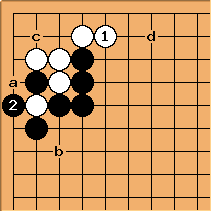 Sojobo If white doesn't answer, a black move at "c" unsettles the white stones, and they can be chased for much fun and profit.

What this really implies is that a black move at "d" almost requires white to play "c" himself, lest he come under very severe attack.

It can be very painful to leave behind aji that makes a move like "d" sente later on. Combined with the large direct value of the move, it should be considered extremely large - not best described as endgame.

LukeNine45: Of course, that was a much better answer than mine. Did I say anything that was completely wrong?

Sojobo I don't know. My understanding of the game is not particularly impressive, either. :)

I think your comment about if white is strong below is dead on - in such a case, the black capture definitely makes his group much stronger, and is thus certainly not endgame. 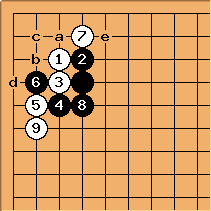 Sojobo I suspect that the alternate

you consider is bogus. There are cases in which it may be better direction, but the local loss (black cutting and capturing

If the left was so critically important, I think black would play

LukeNine45: Yes, I rather suspect you're right-- I forgot that this is a 3-3 invasion, so if black is strong in the bottom left then there's a good chance that he blocked on the wrong side. (?)