LukeNine45: This is a fuseki question. A player at the club has taken to playing on the sides first, instead of the corners. He's a good deal stronger than me, so I would lose no matter where he played his first moves, but I'm wondering if anyone has thoughts on how to think about answering these moves. As an example, here's a few moves of the game we played last night (I'm Black): 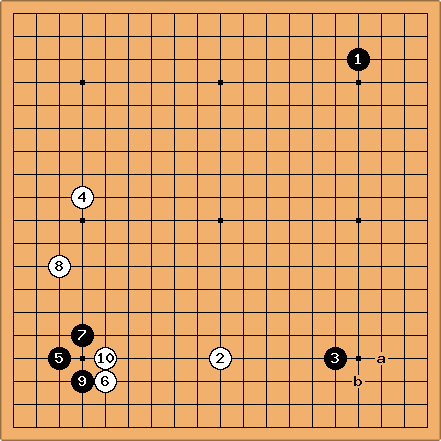 LukeNine45: In the review, White said that

was OK where I played it or at a, but b would be wrong (because after an approach it would have no where to develop to).

Sojobo: I think that if your primary concern is being able to develop, the upper left corner is a better place for

Playing in the lower right is confrontational already, and suggests that your aim is to inhibit your opponent, in which case I would actually prefer 'b'. (If white approaches, you can just extend along the bottom, after which pincering the approach-stone and pincering

LukeNine45: You're right, it was confrontational and that was my aim-- but I also don't want to get stuck with a small corner that can't go anywhere, right?

Bill: The problem is not so much an approach, but if Black plays at b, then if Black later encloses the corner or makes a Chinese-style position on the right side,

LukeNine45: Ah, I see. That makes good sense. Originally I hadn't played a because it looked like to me that a white approach at

ideally. Any comments on that? 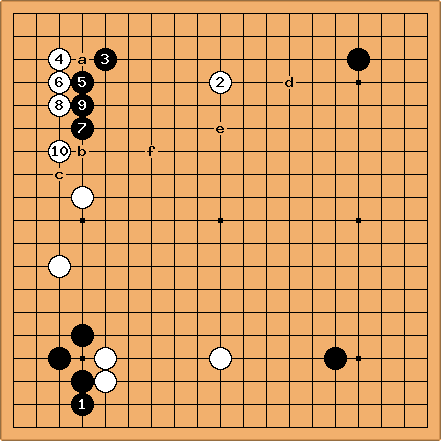 , we decided in the postmortem, should have been at a. (In fact I *did* play it there at first in the review, so maybe I learned something from this painful sequence.)

Bill: I don't know about

looks heavy to me. Why not

LukeNine45: The main reason is that I was trying to make a wall to attack

is on the 4th line). The other reason is that I didn't know that joseki at all (I didn't even know if that move was possible, I will go look it up right now), and white has a history of severely punishing my joseki mistakes... So you think

Bill: I have never faced that situation, and do not know best play, but

As for the wall, there are basically two kind of walls, those with eye shape and those without. The walls without eye shape need an extension. You are making that kind of wall, and so

is attacking it, not the other way around.

As for avoiding a play because you don't know the joseki, better to die a hero, IMO.

LukeNine45: I realized I needed an extension after I'd already made the wall, and then the game went downhill from there. Thanks for your comments, this is all very helpful. I'll try not to be intimidated next time. :)

Bill: Hmmm. Looking again, I think that Black should continue with b - d. Black's wall looks strong enough for that.

LukeNine45: Interesting. I didn't consider that during the game.

LukeNine45: I would never have thought of d in the game. Through f it looks a lot better than what happened... 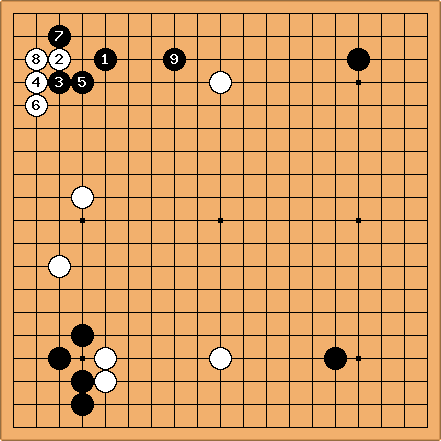 LukeNine45: So something like this? We don't seem to have anything about this joseki on Sensei's. 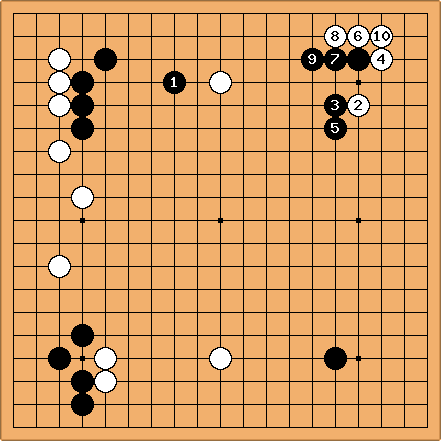 LukeNine45: So why is it "wrong" to open in the sides? Or, in other words, what does one do to take advantage of this sort of opening? I was trying to play corner moves that made his side moves look funny. Is that a good way to approach this?

Sojobo: If there is any proverb that I trust will hold up even for KameNoItte, it's CornersThenSidesThenCenter. A stone in the corner has more implied territory, and, more importantly, more power, by virtue of an easier-to-construct base.

I think all you need to do to punish white playing on the side is to take three (or four) corners, and then play thick.

LukeNine45: I'll keep that in mind for next time, then. 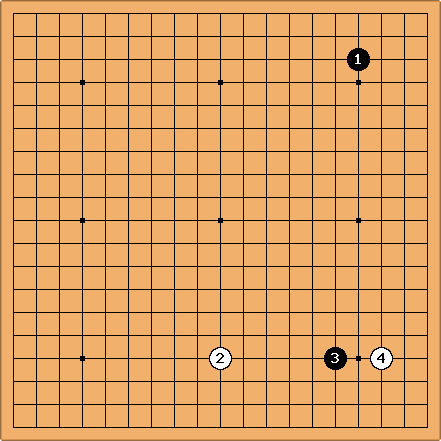 ... that asks white to play 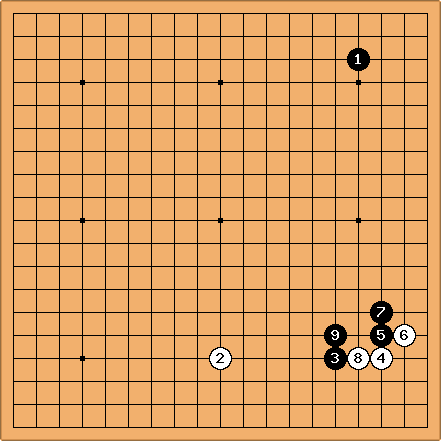 If white invaded, I wanted to build a wall to face the right side. That was what I was thinking, anyhow. 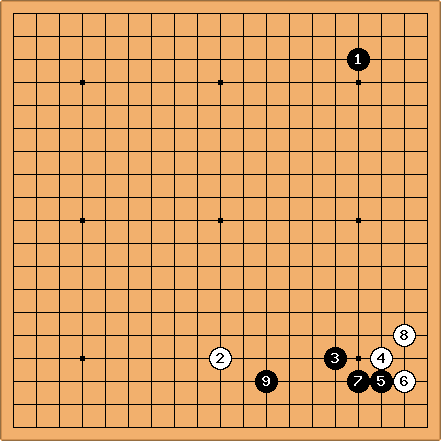 is a natural development, after which

LukeNine45: Hmm, this is better than what I had in mind! 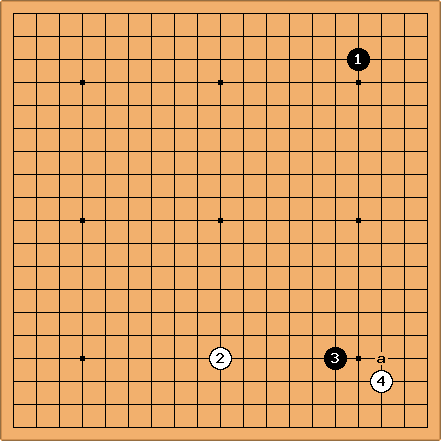 on the 3-3 is White's usual corner play in this kind of situation. (OC,

is better in the bottom left corner now.)

LukeNine45: How should black handle this? My instinct is to attach at a and try to build my wall. 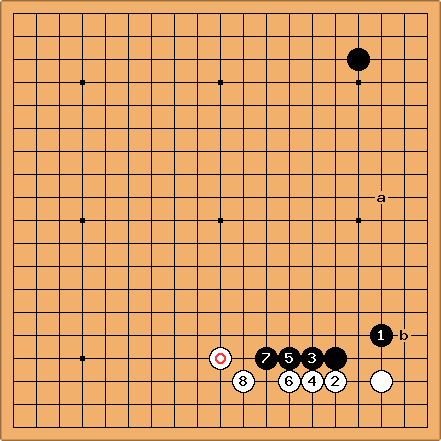 in this diagram is a typical play. If play continues as here,

is a bit too close.

LukeNine45: Gotcha. And then Black is happy to play an extension around a?

would be better at b. 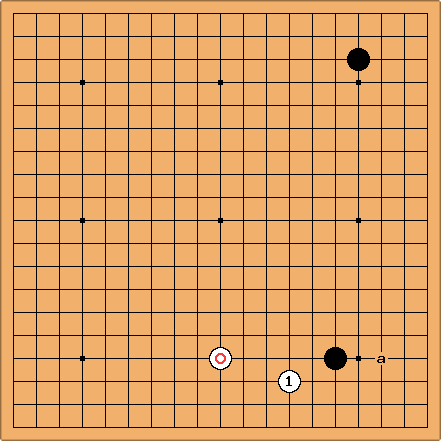 Bill: Back in the days before modern fuseki theory, when top players played on the sides more often than today, you used to see the approach at

LukeNine45: Hmmm... That looks very strange but I can't think of a good way to respond. It looks too vulnerable to tenuki, but I guess even if White plays a then it's like a common pincer situation, so maybe it's ok to take another corner here?

Bill: Oh, I think that

would be premature any time soon.

Bill: An interesting response, I think, is

, but it is not urgent. Black can answer Wa with Bb. (

is well placed for that.) If White omits

Black can play at c, which is also an immediate response.

LukeNine45: That's cool. I never would have thought of

Bill: There are a lot of interesting ideas in ancient games. Some people think that they are not worth studying, especially since the joseki are long outdated, and many situations do not arise these days. But I feel that trying to understand these unfamiliar situations has deepened, or at least broadened, my understanding of go.

In this corner, if Black is not going to respond at