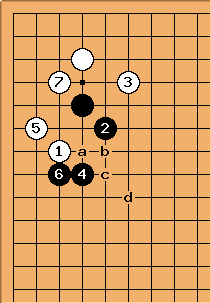 Rui Naiwei in Essential Joseki shows this variation on page 125. There she calls it a situational joseki. Ishida's Joseki Dictionary does not have

seeking to control the balance of the whole board. But after White makes the diagonal play of

, White has all the points. So lacking any special situation, Black can not use this diagram.

No other diagram is given for Black's response to

tderz: it is important to think about protection vs. the cut a-b-c, e.g. with a move at d. 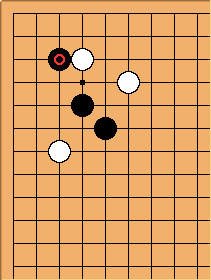 What should White do if Black attaches on the inside at

dnerra: I think the usual continuation is the following (I am not quite sure here, though): 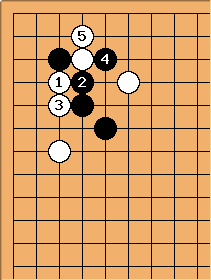 The next black move is a nice shape tesuji that everybody who hasn't seen it should think about! 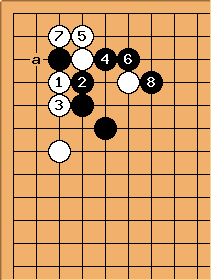 AJP: dnerra evidently refers to the cathedral shape as shown here with

unkx80: tderz, I observed that you changed White a to 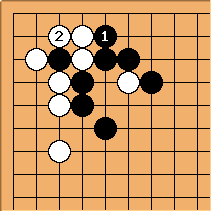 In this joseki, Black can play the large endgame move at

in sente (of course, "sente" here should take the temperature into account). 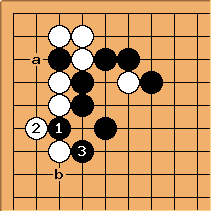 In this joseki, Black can create a ko with

However, it seems that people nowadays prefer to play the first joseki.

unkx80: I shall try to give a very quick answer before I go out for dinner.

A honest answer: I have not been studying professional games, so I don't know. One thing I always forget to do is to quantify my statements. When I say that "it seems that people nowadays prefer to play the first joseki", I base it on my perception from the very limited number of games I see and play. 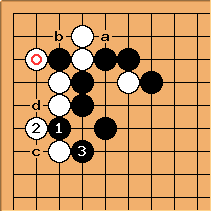 In Joseki variant 1, Black also has the ko aji

! If the endgame exchange a-b has not taken place, the cutting points c, d exist. 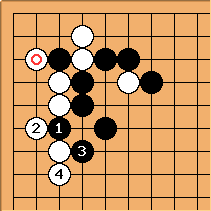 fixes the problem, so Black does not get to atari where 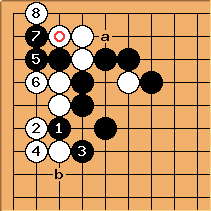 tderz If, in Joseki 2, White connects safely at

,
Black only could achieve something, if there was a Black stone at a. However, and here comes my conclusion as absolute 'non-Joseki-expert', Black wouldn't have found the time in sente to play there!
That's why I would prefer Joseki 2 over Joseki 1. 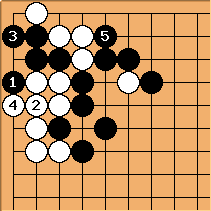 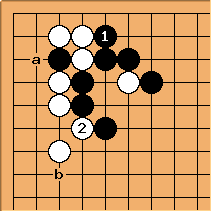 tderz: If Black was moving to

here its sente (threatening the ko aji), but rather slow.

unkx80: I believe this also a joseki: 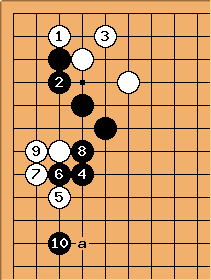 for an extremely complicated fight which I am not too sure myself. 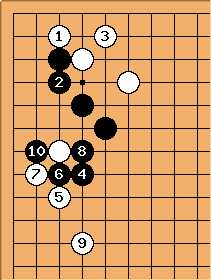 AJP: All about joseki says the above diagram is not joseki and that

is bad for white after black extends to a rather than

. They suggest this instead, in the context of white already having a position in the bottom left.

Velobici: Thank you very much unkx80. This is not too different from the game, there play went like this. 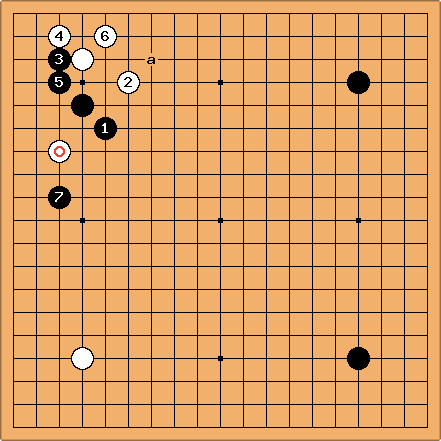 How should the Black handle the circled stone at this point? I felt that the result of the joseki favored White given Black's high stones and the right face a White position rather than a Black one, as might have happened if White had played

mAsterdam: Could you please explain? (And check the colors? I assume you meant to ask how White should handle the circled stone. I circled it as there was no circled stone. Please remove this comment after editing). 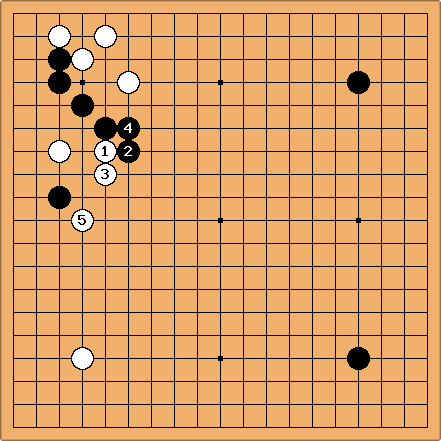 Dieter: I think White may be happy to split Black this way.