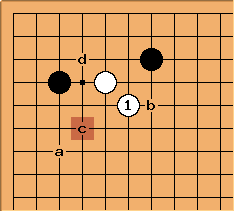 Black seems to have two standard answers: the extension to a and attaching with b according to Ishida's Joseki Dictionary. Essential Joseki by Rui Naiwei shows c as a possible Black response to

Timm(5k): Josekipedia gives a and d as the most common answers for Black. 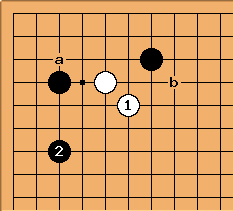 White can now attach at a or press at b. AJP: I was stunned to find that Kogo's lists a as inferior for white. See [100].

Bill: Since when is Kogo's authoritative? A quick search on GoBase does not seem to support that assertion. 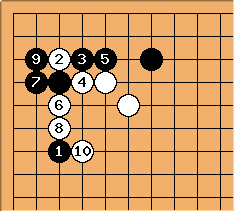 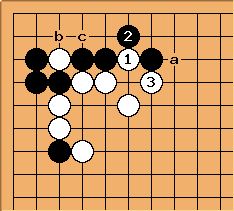 White has an interesting ko to follow up with, if Black plays tenuki after the previous diagram. If Black a, White b makes a picnic ko. If Black c, White a is humiliating for Black. 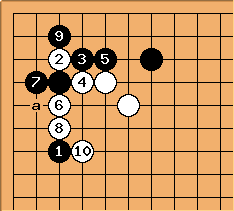 To avoid the ko above, some people choose to play

here instead. This way, White does not have the follow-up which leads to the ko, but White gets to play the large endgame move at a in sente. 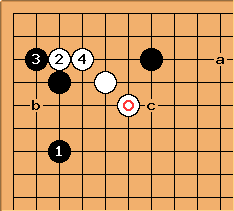 Timm(5k): Another common pattern. Black may then play a, b or c. Note that White would have more options if he played 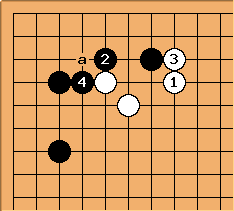 White gets influence along the top side and sente. Black's profit in the corner is considered superior locally, so

has to be effective in the context of the whole board. 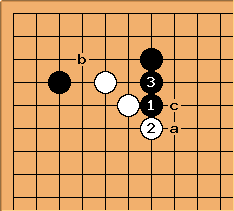 White can play a for central influence or b for preventing Black's connection.

rokirovka: White b is a tempting option if only because the geometric shape of the stones makes it an easy joseki to remember. But what happens here after this play?

at c is also joseki, a more recent idea and currently much more popular. 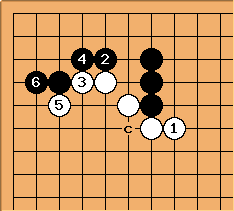 The old joseki was this, with White playing tenuki after

despite the cutting point at c. If Black cuts there White treats the stones including

rokirovka: I don't get it. Are you saying that all four White stones above and to the left of c are disposable? In that case, Black will have a huge corner and White will only have his two stones below c. White will have sente elsewhere on the board, but what has he gained by playing 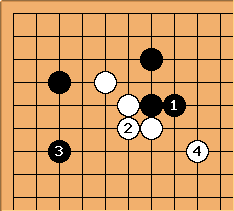 This is a variation with the 'new'

that has been played by top players. We probably assume Black wanted a framework on the top side here, making

an important point in the centre. 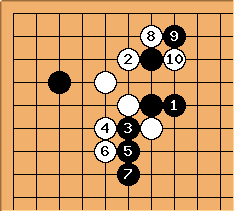 This line has been played in a number of games of Cho Hun-hyeon (on the side of White). 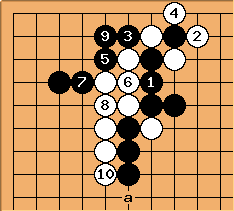 White must continue to run out after

, Black a, naturally. White has made a ponnuki on Black's 'framework' side. White has a quite thin development on both sides. 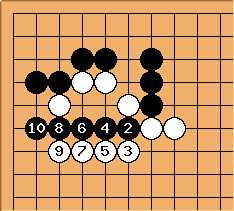 Look at it this way. Black spent 5 stones (

) in gote to get 15 points of additional territory: 3 points per stone. This is a terrible investment for black. If white gains 10 pts from her tenuki with

, and additional points from white's

sente, then black has approximated those points, so no net change, except that now white's wall is perfected where before it had defects. Essentially, black has fixed white's wall for her.

Happily, this exact position is discussed in Problem #17 of Yoda Norimoto's book Vital Points and Skillful Finesse for Sabaki. It is also discussed at the very end of Otake Hideo's Opening Theory Made Easy