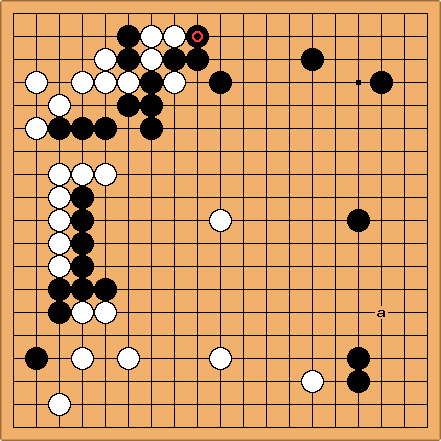 Black has just made a marked move. It is not difficult for White to win the semeai. HolIgor made it so. But can HolIgor play go?

Capturing the stones is gote for Black. No big white group would be threatened. The black group will become stronger of course, but it looks quite strong already.

There are plenty of good moves on the board, especially the moves erasing Black's framework.

So, would you play tenuki?

And if it's to be tenuki, then what would your plan for the game be? Will you invade the moyo? And where? Or would you try to make the heavy black group in the lower left corner make eyes, fortifying your position on the bottom and in the center and invade later with more support? 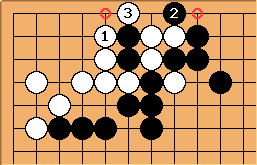 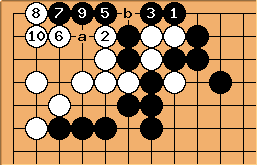 If Black plays first, he will likely get the 5 to 8 combination later. White will exchange White a for Black b. In this diagram Black has 7 points, White minus 6. In total, the difference is 18 points. According to go theory, 18 points is too little to play a 'pure profit' move in the opening, we need close to 25 points for that. Thus, tenuki is probably best.

As for where a tenuki move should be played, I personally think White a looks quite appealing - this way white can remove quite a large chunk from Black's moyo without unduly strengthening the rest. Alternatively, one could start with some forcing moves against the upper right corner. 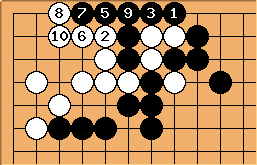 Probably a blind spot from me, but why not 6 here? AlainWettach

BillSpight: I get a slightly different answer, but the moral is the same. This is a large yose play.
I agree with Andre when White plays first. 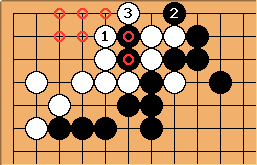 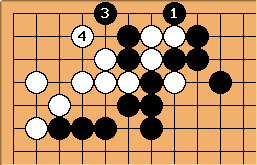 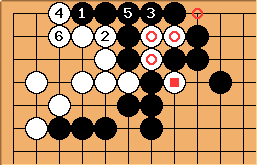 Later still, Black 1 - White 6 is sente.
The sente plays have not altered the count, which is +7.
On the right side the play is worth 8 points by miai counting. When White plays first the marked white stone on the fourth line may have some aji. So the value is 8 points plus.