A question about the Chinese fuseki, or more specifically, White's response to it. 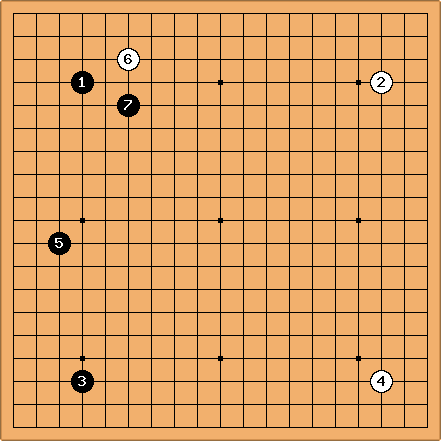 I like playing Chinese as Black, but dislike this

here. However, I have faced it several times as White.

The usual responses of invading the corner or sliding underneath hoshi seem, to me, lacking somewhat, and when I play them, Black usually ends up dominating the left side of the board. However, this might be due to lack of skill dealing with any situation similar to this; I've watched 5d's invade after the tight, low pincer here and allow a better wall to be built, but if I do that it is even worse for me. These problems lead me question my use of

a bit as well.

What other moves should I consider, both after

or in lieu of 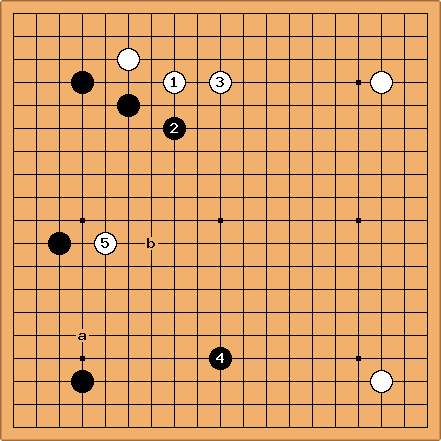 should be playable, because White gets immediate territory, so the question is whether Black can effectively use the influence created from

. Often such a situation ends up in rather complicated moyo versus moyo fights, or invasions.

I am not too sure how best to play

at a may be another option.

By the way, I feel that

and the low Chinese opening seems a bit inconsistent.

should work better in conjunction with the high Chinese opening.

Charles I agree. Black has no territory yet.

above too deep? I would think it would be subjected to a capping attack at b with the result of giving Black a lot of thickness... Or not?

Charles Well, I was saying recently that amateurs overestimate influence (and not getting complete agreement). It matters what influence, and where. Go back to basics on the Chinese opening: Black intends to consolidate one half of the framework, by attacking when White enters the other half. Capping White is certainly attacking, but actually it may simply drive White into both halves of the framework. 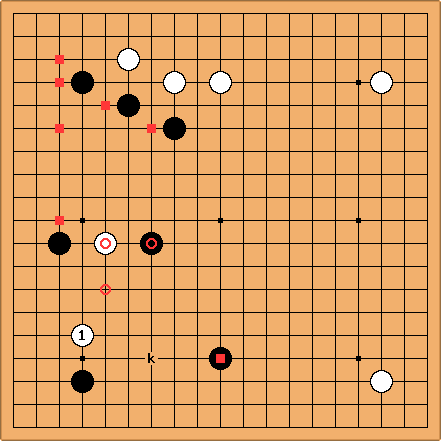 . White is still light, and fighting in Black's framework like this can be advantageous (White's other groups are not being seriously affected). But White can stay calm also, jumping to the circled point. White has good aji at the square points, so moving towards the lower corner first makes sense (general principle: move your weak groups apart, even if one is a virtual group).

DJ: Thanks, Charles. In fact, I never play the Chinese fuseki with black. When confronted with it as White I usually choose an approach from around k, imitating Go Seigen's strategy mentioned below by Bill.
It is interesting to see that a play such as

in the capping variation is still possible when the black framework is seemingly deep (but full of holes...)

Bill: Actually, DJ, Go Seigen does not like Wk, because of the pincer with

Charles The variations after the pincer are tricky. But it's still an interesting way to play; I mean, it is a very open game after that.

DJ: Having second thoughts, and wondering whether we should start another page: if I approach the komoku of the Chinese from the lower side, either Black makes the shimari and I as White extend somewhere to

(or a, b or c), or I got pincered at the same points and I play (perhaps) the kakari. IOW,

are sort of miai no? I must have seen somewhere pro's playing this way... :-)

Charles Well, I don't think this or any other SL page can just deal with all questions people can ask about the Chinese. And the more difficult points generally come a few moves later, anyway. 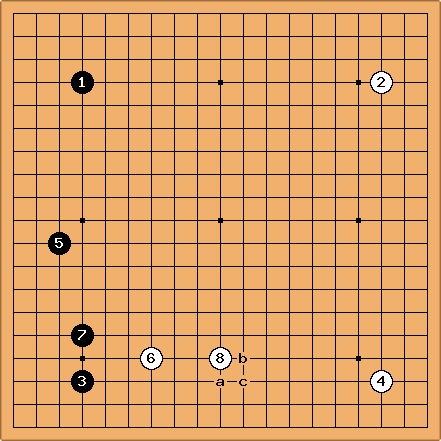 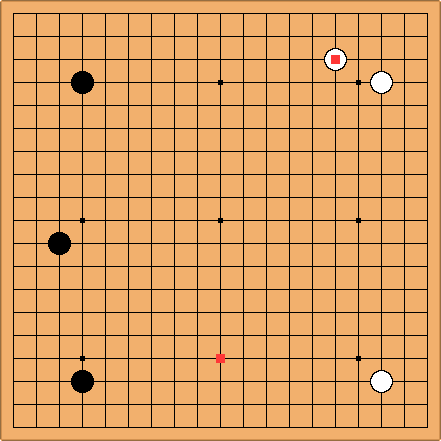 It should however also be good for White just to play

here. Calvin I agree. Look at it this way: black has already made a small mistake in direction of play by not playing near

himself instead of making the chinese formation. White usually doesn't get the opportunity to make a shimari with good direction like this. Offering up an approach move is a typical anti-chinese strategy.

Charles It is actually not as serious as it would be in relation to a white 3-4 play in the other corner. That's because Black's extension in the direction of the square point on the lower side is the best way to develop. 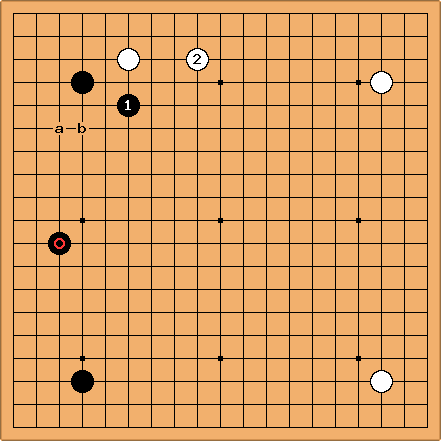 Bill: A simple extension to

settles White without provoking Black to strengthen himself. Wa looks tempting, instead, but may be premature.

BTW, I think that you are right to doubt

. It is a bit thin, and too far away from

Alex Weldon: While I was teaching someone, he played this keima, and I instinctively played b (the ear cleaning tesuji), with the plan of immediately diving into the corner if he protected against being cut and leaving whichever stone he cut off as a kikashi. I got a good result, but perhaps that was only because of the rank difference, it being a teaching game and all. I haven't looked into the variations at all. Still, it seems like a line worth investigating... b is certainly severe.

ACK! I'm sorry, but I made the original diagram incorrectly. I meant for white to be playing nin-ren-sei...

Sorry guys, I wrote the page around 3:00 in the morning, and I blew it. 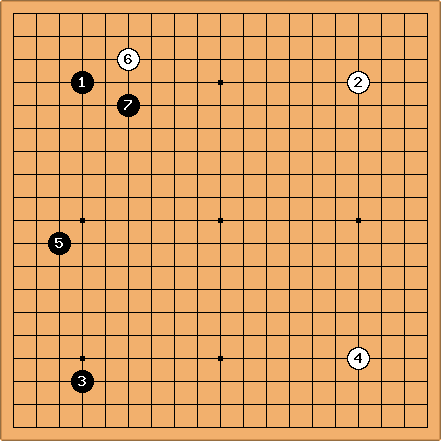 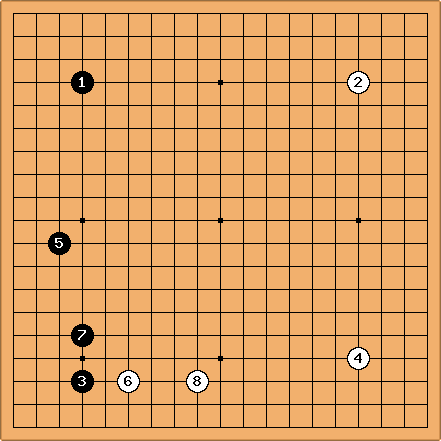 Bill: In this fuseki Go Seigen, in 21st Century Go, says that he likes

, but does not claim that other plays are not good.

was in fashion with the pros in the early 2000s. It looks a bit as if White is reckoning that komi is large?.