This is listed as joseki in the 1996 edition of Kihon Joseki Jiten by Ishida, but I can't find it played in database seaches with GoGoD. What is so wrong with it that it's never played? (In particular,

doesn't seem to exist, and is usually played as a hane at c instead.) Calvin, KGS 12K.

Bill: Kitani and Suzuki do not label it joseki, but outside influence. If anything, that suggests that it is generally favorable for Black, not that anything is wrong with

when Black's influence would be working.

is not joseki, right?

Bill: Nope. No typo. Perhaps I am wrong, but as I interpret them, when they focus on something without giving an assessment, they are suggesting that it is favorable. For instance, in this case they might have said, secure territory, which I think would suggest that it was favorable for White.

Charles Simply from the point of view of shape, a pro would avoid the

shape unless it led to something really good. Given the open skirt towards the circled points, the hanetsugi white a - black b - white c leaving the clamp tesuji behind, and the fact that Black takes gote here, it is really not that special. Also the initial tight pincer usually intends to attack, and this goes off on another track entirely. See immediate life.

above is not played therefore it is no surprise that

does not exist in the databases. 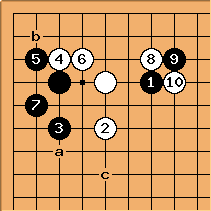 In professional play the pincer at

is virtually always played when there is a Black position of some kind in the upper right. As noted in Ishida, it is a severe pincer, however, it does not threaten to connect underneath. Given this, why should White play at

next? In fact, she does not. Instead White normally (about 90% of the time) answers with the jump to

. Unless there are other stones nearby, Black always replies with

or a play at a. Currently

is more common than the play at b. Black plays

in order to ignore a White jump to c next. One common choice for White at this point is to attach at

. Because Black starts out with a position in the upper right, he is usually willing to let White settle herself here in order to build his position.

So whether or not the continuation of

is playable or not has little to do with whether it can be found in the databases. At the pro level, Black can not reasonably expect to have the opportunity to try it out :-)

Charles I think that's the correct strategic analysis. If Black's influence was well placed on the left side, why would White (in a normal opening position) not jump out?

Calvin: I admit we are discussing a rare variation. In fact, I can only find 9 games where the attachment of

in the original diagram is played. In 4 of them, there is an opponents stone at the star point further down the board. Here's one example: 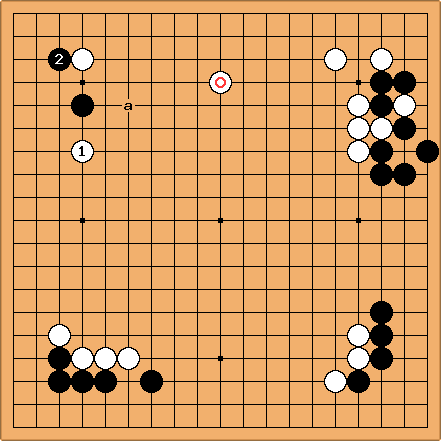 If black were to jump at a he'd be running toward

. I see that as a problem, but maybe there's another reason. But some players try it even if there is no stone in the way. For example, in this game, I see no reason

can't be at a. But Kudo Norio seems to have thought it playable at the time.

Alex Weldon: If I may hazard a guess, I'd say that it's because W has a hoshi stone in the lower left, and B has a shimari in the upper right. The shimari is strong, and limits W's potential for gain on the right side if W runs out and tries to counter-attack the pincer stone. Meanwhile, by running out, he will induce B to jump along the third line, making a low, solid position that damages the potential for W's hoshi.

Calvin: Perhaps. But in another Kudo Norio game as white against Cho Chikun a very similar position occurs (the only difference being that the white stone in upper left is at komoku rather than san-san.) And he jumps then. If you just look at the right side the jump is still the most common. I guess the choice depends a lot on what your future plans are: the jump may support some plans but not others. Just desiring sente can affect your choice of variations a lot. I recently saw a pro commenting on a amateur dan-level game and the dan asked which variation of a particular joseki was better in a given situation. The pro said he can't tell. A bit disappointed with this non-commital response, the dan then showed a couple more moves of his game and the pro interrupted with: "Now I can answer your question!" The point is that the new moves were inconsistent with his previous joseki choice. The pro couldn't answer the question before because he didn't know what plan the amateur had in mind, and it's too hard to give the answer for all possible plans. 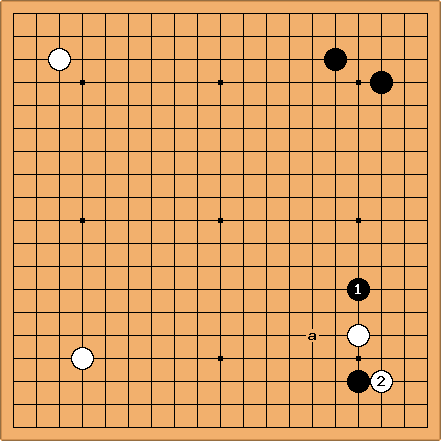 Calvin The comments here are useful. If I understand, you're saying that if the opponent can utilize thickness with the joseki in question, the original attachment may be bad. If the thickness isn't going to be useful, then that probably means that most common move---the one point jump---is playable, too. This combination helps to explain its rarity.

In my own games, because I haven't mastered the response to the one-point high pincer, I find that it seems to refute my high approach. I never seem to gain enough from counter-attacking the tight pincer stone to make up for the territory my opponent builds in the corner. I'll look at the josekis for it again. Maybe I'm expecting too much from the high approach.