I am Andrew Hutzel and this is my first try at this sort of thing, so if I've done something dumb like make a board with 20 lines please tell Hu cause he's the most polite person I know (jk don't want to flood him!). It's a discussion page, I'm looking for anyone's opinion on two cuh-razy things I stumbled on to see if they are only crazy or if they have a sublime element to them as well. But especially single digit kyus and dans, cause they would know better than the rest of us! well here it is the first diagram here is an actual game I played and demonstrates a potential set of josekis that I (currently) believe may outnumber the variations of the taisha joseki. By the Way, the fuseki that I (black) used really would only work with a 2 stone handicap as was given in the actual game. 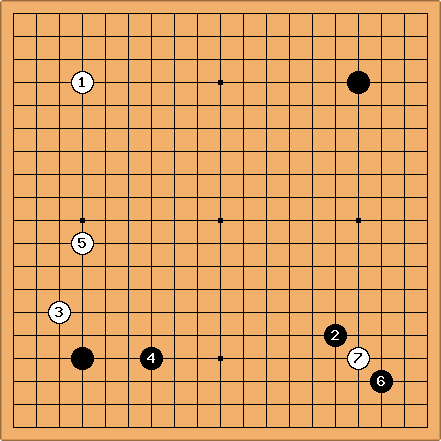 So, let me first explain the unorthodoxy of move 2: I was going super duper for the center. I know, silly. But I knew that white would do one of two things: not play the 4-4 before I could strengthen that corner or do so. In the first case I planned to strengthen the corner just as one would if one had played an orthodox 3-4. Of course my choice of strengthening moves was kinda out there, and my opponent challenged me to defend my still newborn theory just out of the shell. So the result was I treated the 5-5 and 3-3 as separate entities: I first pretended that white had simply played a 4-4 under my 5-5, and then his next move forced me to pretend that it was instead a case of my 3-3 getting capped by his 4-4. but they quickly connected, making a highly interesting shape. 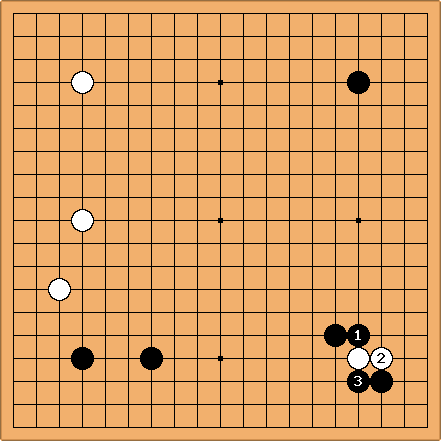 Alex Weldon: The original asker of this question is missing a fundamental principle of Go, which is to be consistent. If you're going to play 5-5 and go for big central influence/moyo, you should not then change horses in midstream and play 3-3. If you want to play a second move in that corner, play a 3-5 point to make a high shimari, and aim to get the other 3-5 point for a pillbox. That said, the W splitting move looks weird if there are no supporting stones around.