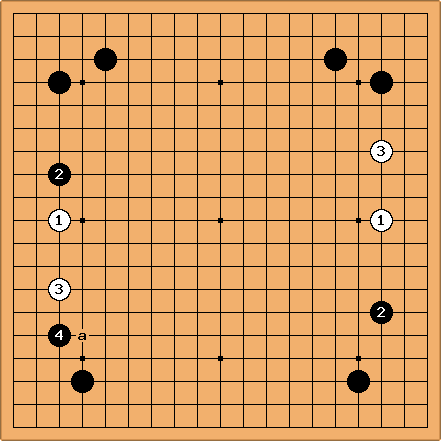 kokiri - I've been experimenting with this formation recently. Usually white approaches the bottom corner and I've seen the wedge criticised because it lets black get two enclosures.

When white plays at

though, what should black do?

(left) My idea is to play

on the left with the expectation the if white plays the natural extension, I can enclose the other corner with a pretty strong attack,

such as a seem awkward for white too.

on the right, making the loose enclosure in sente. However i would anticipate extending across the bottom which leaves white able to play along the top, devaluing the top enclosure.

Maybe this question is a bit esoteric, what thoughts on the correct direction do people have?

dnerra: I think your left diagram is wishful thinking, and white will play an approach move instead of

. Why do you think

at a is awkward? (I think I would play the low approach move.) Sure it leads to a fight if black pincers, but avoiding the fight with

as shown in the diagram looks very submissive. I would also play

as the ogeima shimari as shown on the right side. You got an enclosure and an extension, and then worry about your other enclosure not getting an extension? That feels like complaining it's not Christmas on your birthday to me... 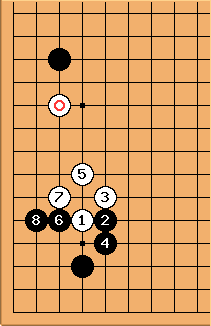 k: well, actually my birthday's new year's eve, so it would be a little unreasonable for it to be xmas as well ;-) In practice, in my games the left hand diagram is quite common. I'd be quite happy to see the low approach in response to my extension. in reply to the high approach, I have played and liked the outside attachment. if white blindly plays joseki, this looks makes

look out of place to me 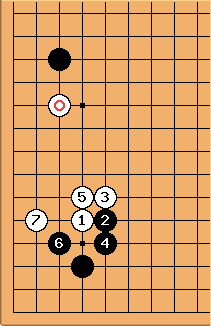 For instance, how about a solid connection?

Bob McGuigan: I've seen the wedge move played by top pros so I don't think it can be condemned out of hand. I'd like to know what is happening in the other, presumably White, corners, too. However, the left hand pattern seems to put more pressure on White (

is sente?), and the larger potential for development of the top left enclosure might be worth more than the loose enclosure in the lower right. 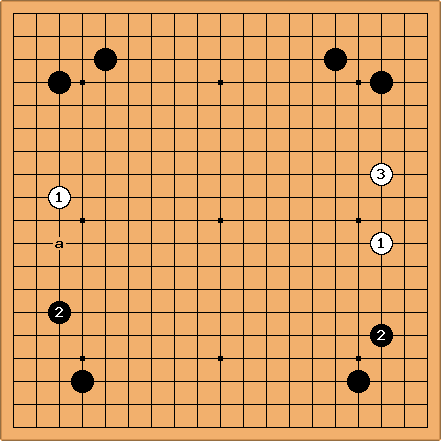 as was explained by Charles earlier on this page.

The other asymmetrical choice at

shown on the left side here is very rare. There are not enough examples to say there is a usual answer. However, plays such as

and a have been used.

Bob: The splitting play Dave shows on the right is what I remember seeing in pro games.