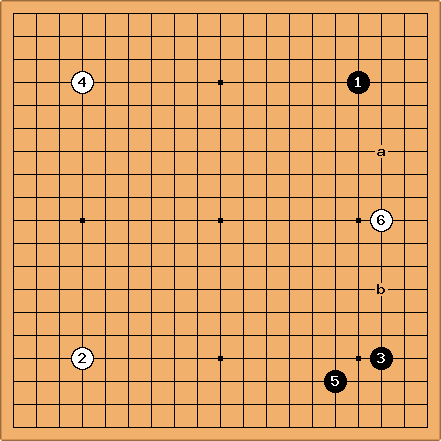 is pretty much forced by

. The Orthodox Fuseki page suggests that a and b are miai at this stage, and it's not urgent for either side to play either yet; Black can choose later which is better based on later developments. This makes sense to me.

But in going over one of my games on KGS, a 1d player told me that Black should play a immediately and White should extend to b.[1] I told him that I thought that Black could hold off until things develop later, and he said "can't let White choose."

I suspect the Sensei's page is right, but I just thought I'd ask if people see any merit in his words. Since he's about 6 or 7 stones stronger than me, it seems cocky for me to dismiss them entirely, even though it makes me suspicious that he also said

would be okay one line higher, but one line lower would be too close to Black's shimari, which is also exactly the opposite of the wisdom given on Sensei's.

My thinking is that, although Black a may be good because it's sente and White one line above that would be likely to get Black to respond (to avoid double kakari), Black one line above b is also sort of good because it makes a pretty good extension from the shimari, although a couple lines too close. Meanwhile, neither extension to a or b seems much more desireable for White. Going down to b prevents Black from making an extension from his shimari, but

already prevents a perfect extension. Going up to a doesn't seem so hot to me either, because it's one line too far away to be a normal kakari to

. Going one line further, as mentioned above, becomes the normally correct kakari, but the three space extension from

So, my initial hunch was that I'd trust Sensei's more than some random 1 dan on KGS, and after thinking about it a while myself, what's said on Sensei's still makes more sense to me - playing on either side seems pretty good, but not perfect, for Black, and neither side looks particularly great for White either, so it seems like a and b really are more or less miai at this stage, and Black will probably be the one to get to choose later anyway.

So, have I answered my own question, or does someone have something to add? 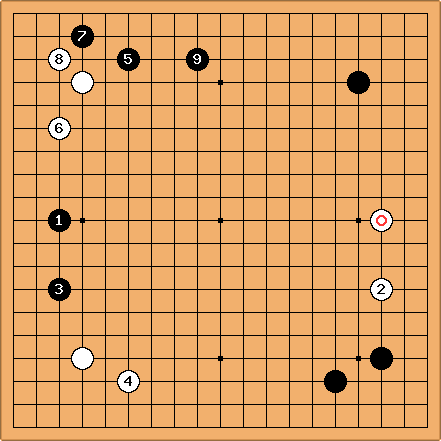 , is a bit lukewarm. Through

the position may favor Black slightly because his corner is more secure, but the real problem lies on the top side. After

White has fallen behind in development.

Dave: In looking at the data from pro games, I could find seventeen games in Gobase from this position with White winning eleven. All were played in the period 1990 - 2001. Looking a bit deeper, it seems that since 2000 the pros have turned away from

here. No clear favorite has emerged as an alternative. In actual play it looks like the pros have not been able to demonstrate Go Seigen's evaluation.

As a result of discussion here, the answer to this question is now at Orthodox Fuseki - After the wedge.