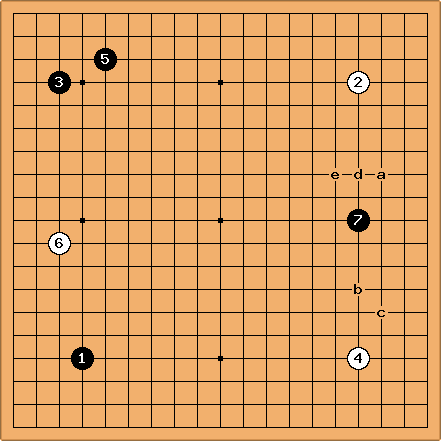 Black 7 breaks up White's side, but is it too high? White answers at a and Black ends up with an open skirt while White takes profit. What is (or should be) Black's strategy here? How should Black respond to White a?

DieterVerhofstadt 1k: Really, Morten, BQM9 and BQM10 are pro questions. I bet even Yi Ch'ang-ho and Cho Chikun will differ in viewpoint on them. I don't think I'll have an opinion on those before I'm 7D ! (= never) (Feel free to remove this remark as soon as you've read it)

HolIgor: Usually I don't play a high wedge. But this is possible. I have to try. When playing on the fourth line I expect the opponent to build some territory under my stone. This is a keshi move. If the opponent insists on getting territory here I'll try to press his stones as low as possible and build some thickness instead. I will use this stone to build territory only in the case when some of my moves are forcing. As the reply to a I would play b or c. The purpose of b is to increase influence in this part of the board and with c I will hope to peek in the corner. If the opponent defend the corner. I'll have to get sente and limit her in the top corner. After that only d or e will be played.

But this is the stage of the development of the game plan. Pros spend hours doing this.

MortenPahle-- See comment on BQM9 and Big Question Mark - I am less interested in Yi Ch'ang-ho and Cho Chikun's answers than in the underlying logic they apply to arrive at the 'answer (TM)'.

In this situation, what can Black reasonably expect to obtain on the right hand side?

I suppose the reason for these questions is that I have recently started playing several games giving anywhere from 2-9 stones of handicap (at my level, I am more used to receiving than giving hdcp.) Of course I sometimes end up playing abusive moves or overplays but I get away with it because the black player is worse than I am. But it has made me much more aware of the question : What can I reasonably expect to achieve in this situation?

I hope that by elimintating false expectations, really improving my judgement of the real value of positions, I can avoid making bad judgements in my games.

Maybe this is a subject for a separate set of pages?...

HolIgor: I think that the idea of a set of pages on planning game is interesting but I am not sure if I am qualified to do them. In most cases the game does not go as planned. Each time your opponent makes a mistake the plan should corrected, but still even in a fast game you usually plan in the beginning several stages of the game strategy. Usually wrongly...

unkx80: Personally speaking, I don't like Black 7... I would play 7 on the third line instead. Of course, Black 7 is not "wrong". But seriously speaking, Black playing at 7 aims for influence in the center and not territory, while playing on the third line aims for a split in the right side while getting a base is confirmed.

BillSpight: I think that this is a matter of style. Since Black has a shimari, the high play at 7 may be more balanced than one point lower. (By the way, at this point I think that the left side is more urgent. Black should extend from his shimari.)
Takagawa pointed out that it may not be necessary to respond if White approaches. E.g., 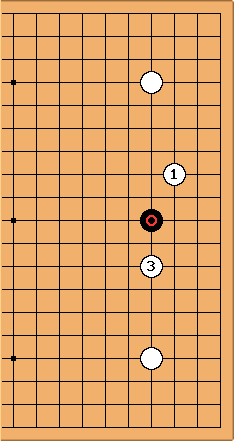 Compare this with White's sanrensei. The net number of stones is the same, but Black may consider this to be a bit better. Even without defending the marked stone, Black has made a gain from it.