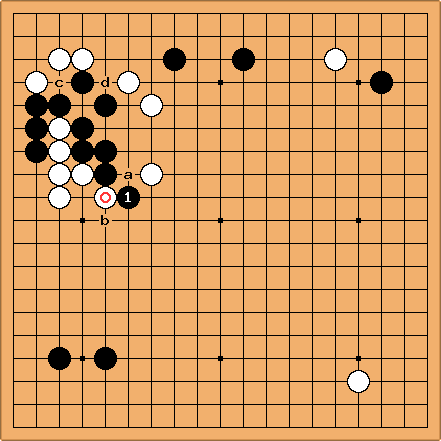 At move 32, White (Go Seigen) decides not to cut at a, presumably because the atari Black b and the ensuing awful shape is intolerable. Is there anyone out there who can read out the fight? Question 1: who wins the semeai if White cuts regardless? Question 2: even if White wins it or if she can't read it out to the end, is it preferable not to cut but play calmly in order to maintain pressure? Question 3: what would you do instead of cutting? (= Where did Go play - not too hard to guess).

If Black is concerned only with living, I think he can do so fairly easily by playing c and d in sente, then making his second eye on the edge. If White tries to resist, I think she will lose her corner. 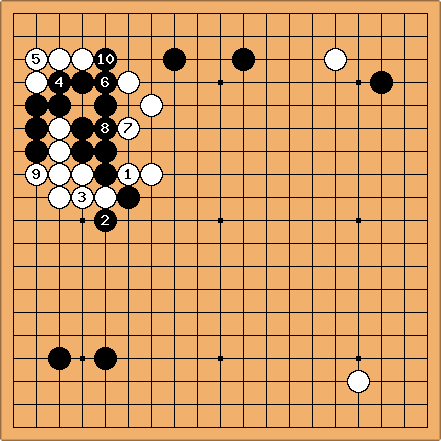 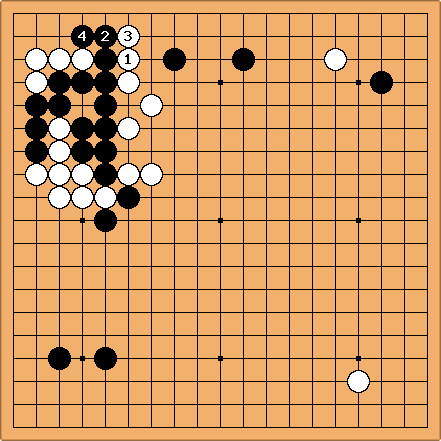 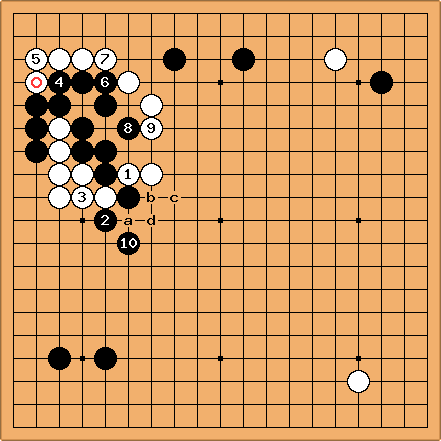 So, if White keeps up the pressure with 7, Black lives with 8 in sente, and then connects at 10 to put the left side group in great danger. Yes, this seems intolerable for White. So, let's go back a bit. What if White doesn't defend at 5: give up the marked stone in exchange for having shut in Black. Too much of a loss? --DieterVerhofstadt

Why would White play 9 here? Rather than White a, Black b, White c, Black d, White 10? Charles Matthews

FilipVanderstappen I think black should omit the vulgar kikashis at 4 and 6 which are truly aji keshi. He should just atari to ruin white's shape and live with 8 (he always has an emergency eye at the side). The white corner has bad aji, his group on the side looks awful and black is alive - white could not play like that. In general allowing the atari is unbearable and sufficient reason to make this variation unplayable.