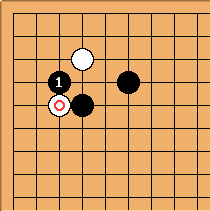 here has a long history (it dates back to the eighteenth century). It impresses amateurs, rather than pros. 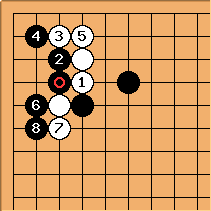 In reply, the moves up to

are only rarely varied, in pro games. 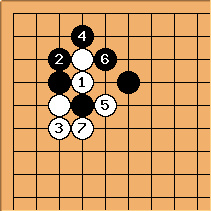 The only variation that is worth mentioning is

here, catching the black stone in a ladder. Obviously, white can only play this if the ladder works. 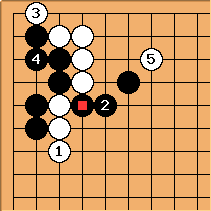 Continuing the main line, now White decides how to handle the cutting stone

is played (the alternative is to play atari first at

). These are the standard plays, with White able to jump out as far as 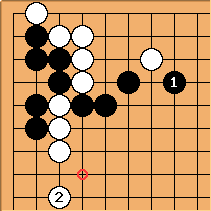 Now both sides try to arrange their shape on the outside, by playing moves against the inner groups.

There are a number of variations, but

at the circled point equally so). 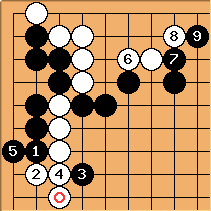 threatens Black on the left,

are required (White's choice of how to play

clearly determines which side the peep

instead). On the upper side

is honte but it is also possible to play directly at 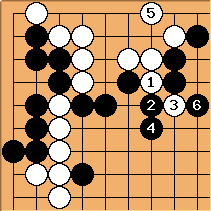 This is the joseki book continuation, assuming White wants to leave ladder aji on the outside, and that

is a good ladder. 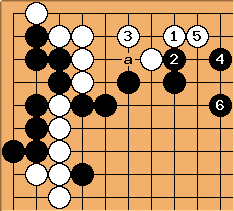 instead of a, black pushes in with

to live, and black fetches up his shape with

In a pro game, naturally, the players adjust the way of playing the later stages of this joseki, according to the needs of the overall position. 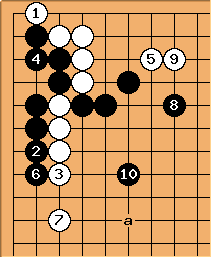 , then only protect at

Black crawls once more, before making shape in the centre with

and B0. After White a, it's time to play elsewhere, at least on a board which otherwise has only single stone corners.