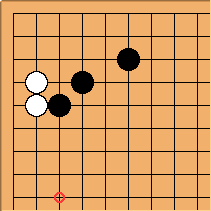 This corner position is seen frequently in contemporary games. White may have a stone at or around the circled point. There are some sharp variations. 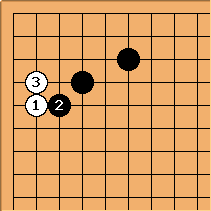 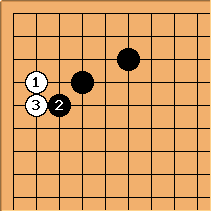 A second way is this (see 4463 enclosure 2-4 approach), which is a transposition: since

is the normal play this can be expected after 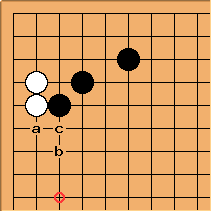 Black's continuation are at a (normal, at least if there is no white stone near the circled point), at b and at c.

Some of material below moved from 4463 enclosure 2-4 approach (edited). 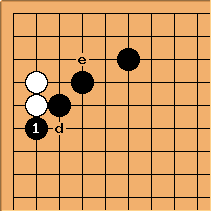 , White has the choice of cutting at d, which is a complex fighting variation, or playing immediately at e to trade influence for territory. 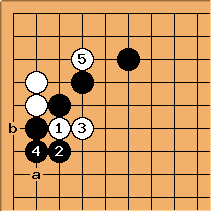 can also be played at a, even though it gives White the exchange White b-Black

which forces Black into an empty triangle. 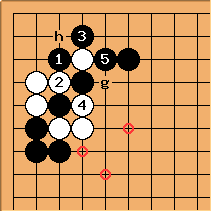 For Black to confine White to the corner would be submissive, and give him bad shape, so he goes for an exchange with

There are some variations on this main line (

at g, and the amazing

at h played by some top Koreans). After

White has escaped with only a false eye, and needs to make good shape. The next move can be at any of the circled points, and perhaps others. 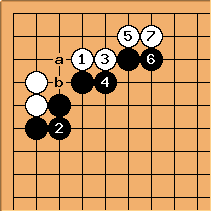 here, she takes the corner.

removes the aji here. Note that after

the corner is not as large as it looks - Black a captures two stones. If White wants to keep these stones, she can play

at b, followed by

. Black does then get to enclose White on the top, as well as on the left side. 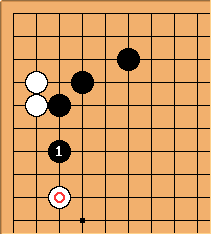 If there is a white stone at

, it makes sense for Black to play at

will have some value but the fighting is clearly affected by its presence. Now there isn't a settled joseki. 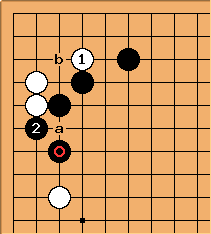 to see first what Black wants in the corner. Then Black has the chance to play

. Alternatively White can play simply at

or a, allowing Black to take most of the corner with b. It will all depend on the left-side context, at least. 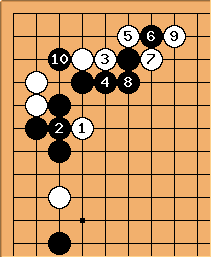 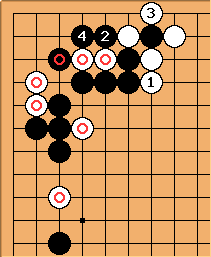 White ended with sente and a thick position on the top side, having treated all the