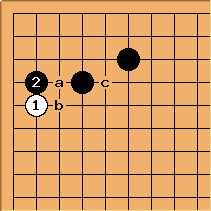 This position arises from 4463 enclosure 2-5 approach. White can wedge at a or extend at b.

at c is a trick play which requires knowledge of a clever tesuji to refute. 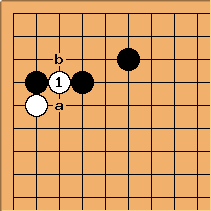 Black will usually cut at a, but the block at b is also possible. 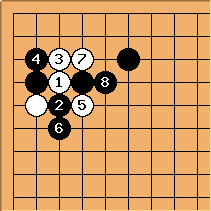 There is no choice for

is sometimes played at 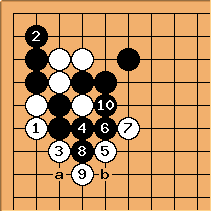 This is the most common continuation, but

, White chooses between a and b.

game commentary at gogameguru, An Younggil, 8p, says this sequence was taught to him as joseki as a pupil, but today it is regarded as too good for Black. Because of this

in the previous diagram is rarely played nowadays, and white almost always plays the extend variation below instead. 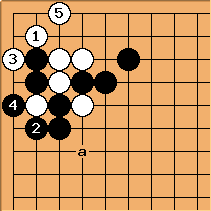 Incidentally, White can live this way, but it is small life. Still, as an invasion pattern it must be known. 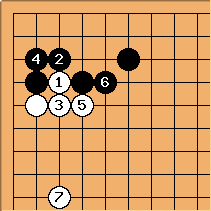 seems to lack fighting spirit, but it is sometimes seen. After

, white should continue at

. It's vital shape point. If White omits the move, black pushes at the point, and it's actually like hitting the head of 2 white stones , very painful for white. 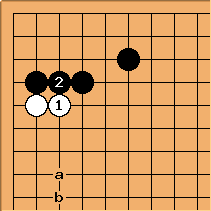 Black will nearly always defend at

. The following moves depend on the surrounding position, but white will probably play at a or b next, then black can either continue to attack the white group or else tenuki. 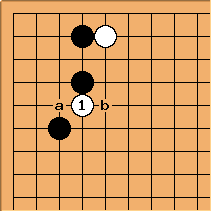 is a trick play. The natural move is a, to connect. 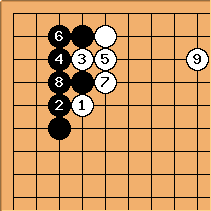 , Black is forced into a low position. Compared to black's initial strength, White gets too much influence here. The 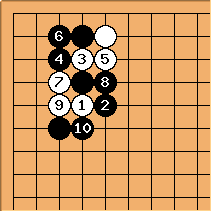 is the stronger reply, but requires knowledge of a tesuji. 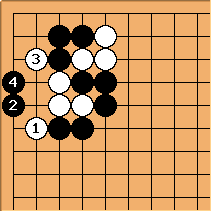 The Patting the raccoon-dog's belly tesuji is applied with 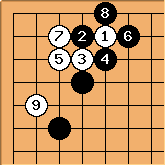 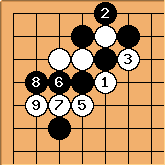 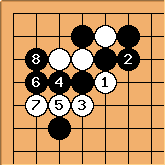 The previous diagram is not correct play for Black, because Black would play like so 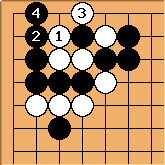 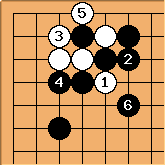 So white should do something like this and live in sente