Typically, the press at

is played when there are coordinating White stone(s) at the upper right corner. (A KataGo data analysis doesn't support this preference). 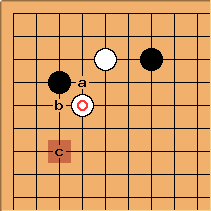 A database search shows that only two moves, a and b are popular. AI analysis confirms. This page holds a chapter on both.

c is a trick play known in Japan as the nineteen point trick play. 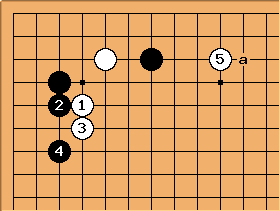 A simple joseki is for Black to play the crawl at

and jumps out at

. White has given Black territory, and

attacks the lone stone to get profit to offset the territory lost. Sometimes

is played at a. 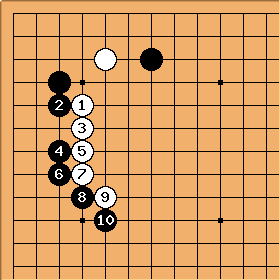 White can also to play large scale with

, depending on the whole board situation, and a pushing battle ensues.

will typically play the double hane. 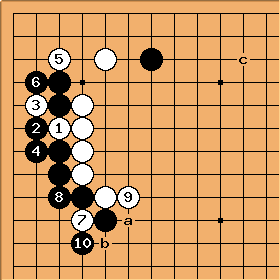 is the perfect chance to take some profit at the corner. Then

, then White a, Black b, and White gains sente to attack the lone Black stone at the top, perhaps at c. 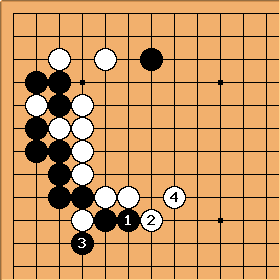 Black can also gain sente with

, White is extremely thick and it may not be easy for Black to find a suitable move at the top. 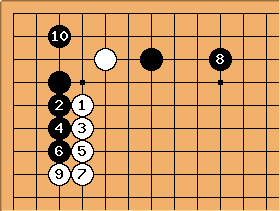 Depending on the whole board situation again, Black may choose to crawl four times to gain sente so that Black gets to play

is a large move that seals Black in. 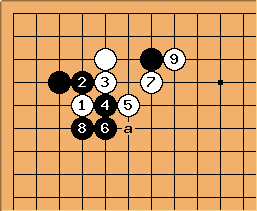 There is also the push at

and the cut at

. Typically the result is an exchange ending at

. Later, a may be a point of contention for both players when it comes to influence. 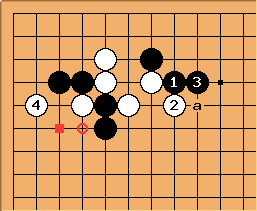 may begin a complicated fight.

is a tit-for-tat move.

Charles There are some variations here in which White starts by pressing at a (and presses more than once). Then White fights at

, or the square or circle points. 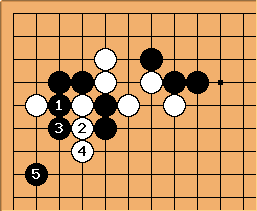 A simple outcome of this is for Black to sacrifice the two Black stones in the middle and settle for an exchange. 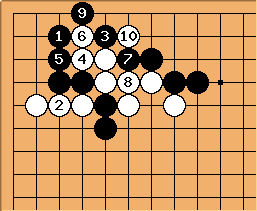 is another way. Note that 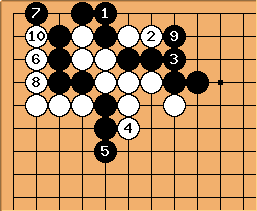 increases the number of liberties of the dead stones for more aji, and

is vital to prevent Black from making a very comfortable atari there.

is a tesuji that exploits the aji from

to gain profit, and

is also a tesuji that minimizes the loss in the corner. 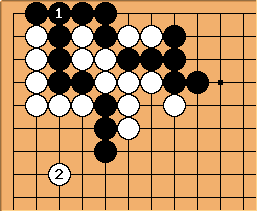 We have a fight in the middle.