Each issue of Weiqi Tiandi carries an in-depth review of a game. The 2nd issue of October 2010, there are two issues each month, featured an in-depth review of the third and deciding game of the 2010 Quzhou-Lanke Cup which was played on 2010-09-30 between Xie He 7P (black) and Jiang Weijie 5P (white), komi of 3.75 points (Chinese rules). Black won by resignation.

Note: the number of diagrams has been changed from the original article so that no more than 10 moves appear in a single diagram.

The last two years Xie He has been closing in on a tournament victory, full of hope to capture a title. In this year's tournament, he defeated Hu Yaoyu, Li Kang, Gu Li, Zhou Ruiyang, an unstoppable series of wins, particularly in light of the bitterly contested semi-final game in which he rebuffed the efforts of Zhou Ruiyang. Yet his opponent, Jiang Weijie, not yet 20 years old, has ascended like a rocket. This year Jiang Weijie defeated Kong Jie, Niu Yutian, Piao Wenyao, and Yang Dingxin in succession to reach the finals. Last year, Jiang Weijie, representing the Hangzhou Team in the China WeiqiLeague, put together an astonishing record of 14 wins, 6 losses to help the team capture the championship. In August of this year, Jiang Weijie forcefully won the opportunity to face Gu Li in the Mingren Tournament. Thus, have these two very strong players come together, the resulting final game will be even more remarkable. 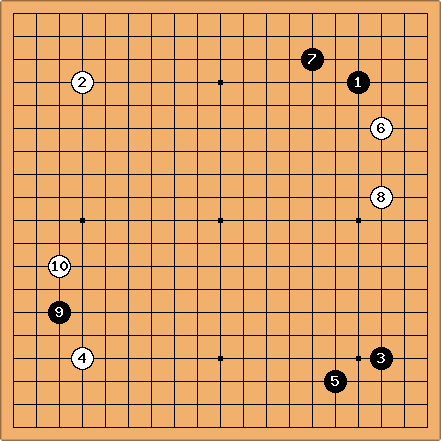 One gets the impression that White is a little better. Black 7 played as a low two space pincer is popular recently rather than the small knight's move in this game, playing thus will drag the game into a long drawn out battle. White 8 two space extension is rarely seen, rather the small knight's move into the corner or the three space extension is common. White's play in the game is very steady, perhaps Jiang Weijin worried that Xie He had a trap waiting for him. 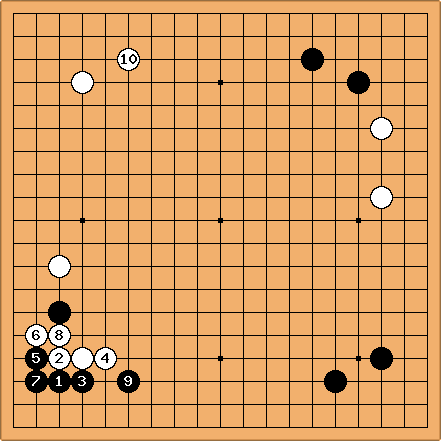 The completed joseki in the lower left corner forms solid territory and matches the overall board position. 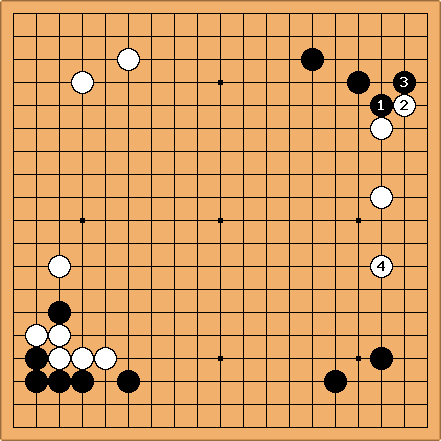 The diagonal attachment of Black 21 is large, White would normally extend upward , however with the two space extension already in place, the resulting White position would be somewhat cramped. In the game, White chose the longer fight, but locally Black can be satisfied. 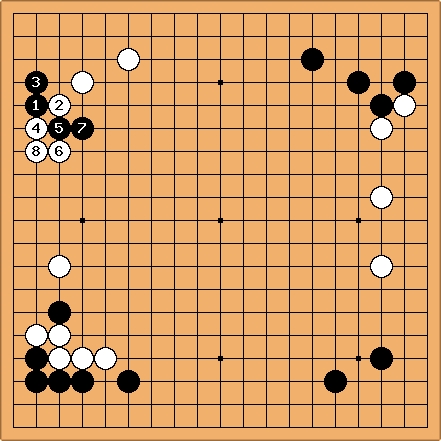 Black 25 is a common technique. The diagonal attachment of White 26 is the strongest response. There is no way for either side to back down. If White 26 was played at the location of Black 27 to defend the corner, then Black at the location of White 26 would follow along with a three space extension for Black on the left side. White is unwilling to allow Black to handle the side in such an easy manner. 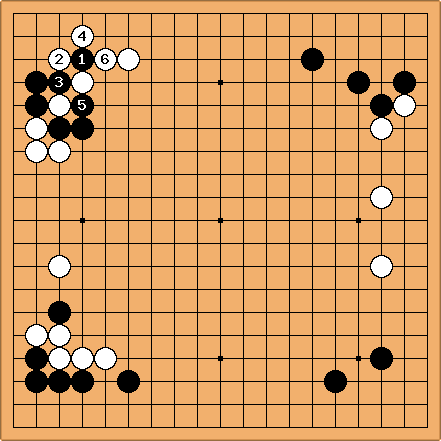 Once black attaches underneath at 33, from the hane of white 34 to white 38 is, currently, a standard way of settling the shape. Were white 34 to be played at 38, Black would descend at 36. Black would live too easily; White would not be satisfied with the result. 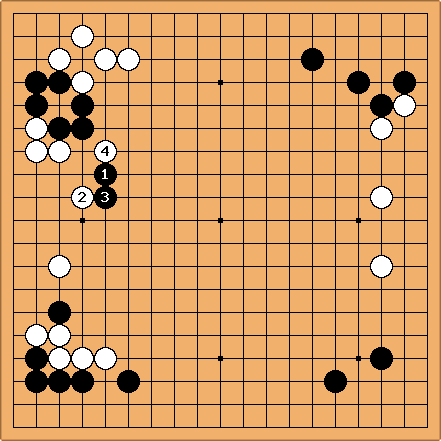 Black 39 is in the correct direction, running and pressing down on White's group at the same time. The attachment of white 42 is a severe move. Jiang Weijie has an unusually acute sense of shape. For black 41, jumping out towards the center would have been the right move. 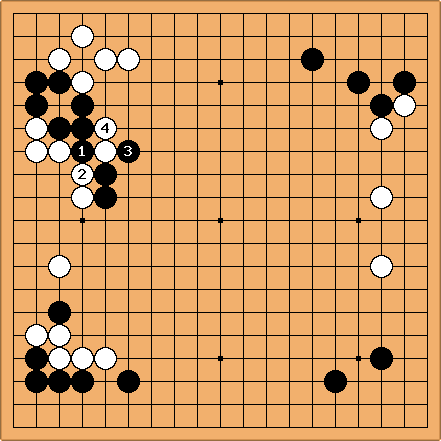 After thoroughly considering the matter, Xie He, found that the best way of dealing with the situation to play at black 43 and prepare for the impending fight. 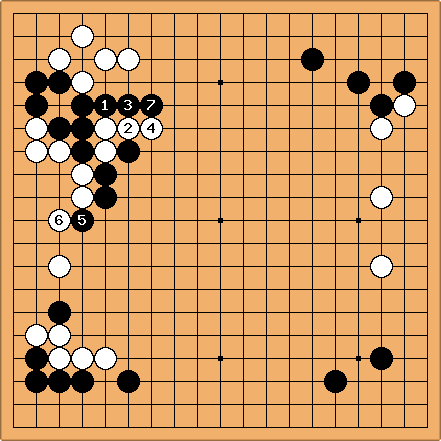 By the end of this sequence, Black has been cut into two groups. Black 47, 49, and 53 form a thick, but completely ineffective wall close to White's top left corner group. Black faces a bitter fight. 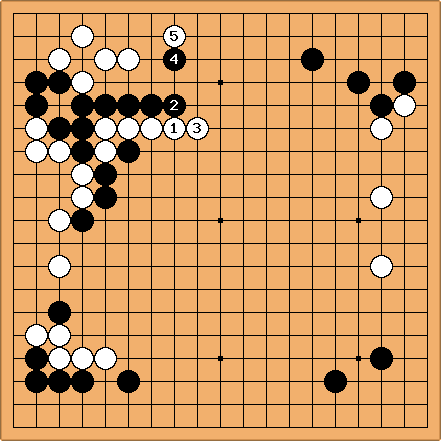 Black must first deal with the top side of the board by playing black 57. Attaching underneath with white 58 is good, simply making life while Black is rushing to handle the stones between the two white groups. In a flash, the overall situation has been reversed. As Black is entangle, White must not let Black escape. During a contact fight, one must avoid becoming compacted. 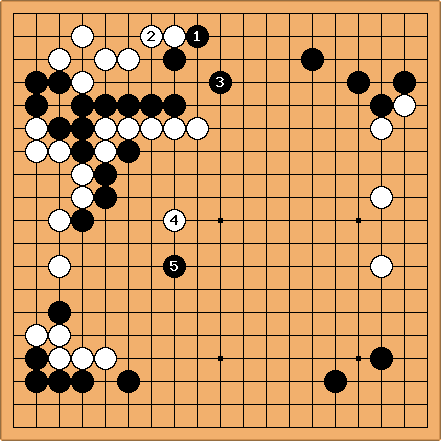 Black has no alternative but to fix up his group with moves 59 and 61. Were Black to play hane at 60, cutting White's group, Black would face a life and death problem with his large group of stones. With 62, White takes the initiative to envelop the center. Black 63 seems to hang from a thread, don't know if Xie He had determined that the situation was not bad, or if the decided that this was the only way to play. 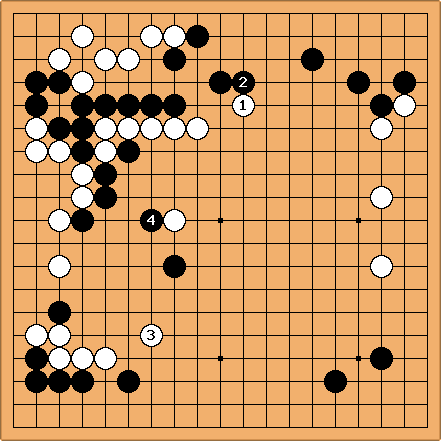 White 64 is a low cost (to White) sente move, that keeps Black from taking the initiative in the center. White 66 is excessively fierce, young people these days never allow for a margin of error. Black 67 is a deft play that White will find hard to handle. 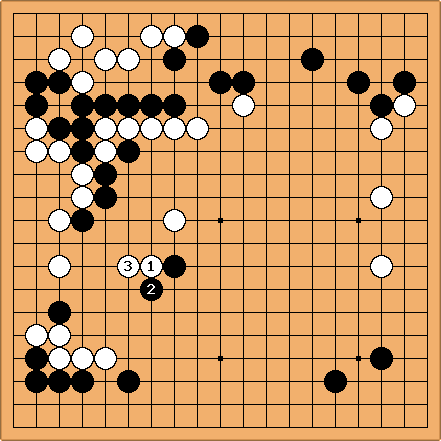 The attachment of White 1 is the standard measured response. Its enough to take a portion of the center. White has no reason to be dissatisfied with this result; White's position is quite good. Could it be that Jiang Weijie is not confident of his position given this result. 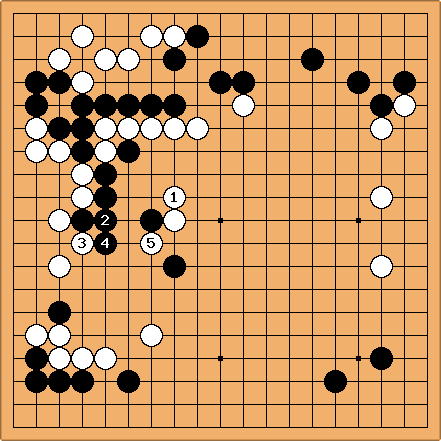 Due to the condition of the left side white group, White dare not play forcefully in this area, so White has no choice but to pull back with

connects, moving out. The white group 到嘴的肉眼看着要 escaped. After the hane of

, Jiang is not satisfied. 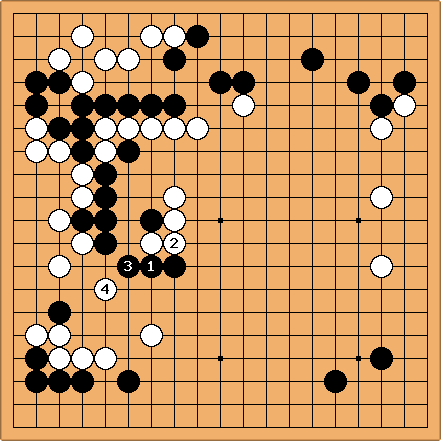 blocks, through this method, Black is already connected out.

again breaks a possible eye, Jiang Weijie 杀红眼了. At this moment, the center White group pressing down is a vital matter of immediate concern, but at such a time a person is unable to act calmly. 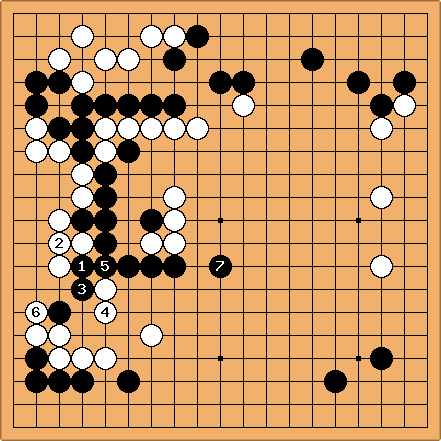 cuts through White, and

jumps out into a large, open area. Unexpectedly, the white group is left with perhaps 10 points. As a result of this this exchange, White will need considerable compensation elsewhere. Already, the flow of the game has begun to turn.