Tengen has been researched by professional players in the past, and the results weren't negative. Aside of occasional historical experimentation, Kubomatsu Katsukiyo was the first to thoroughly research tengen opening, playing it in all of his spring 1934 Oteai games (when he held black). He even wrote a book on tengen play. Tengen was also an important part of the shin fuseki movement that started at about that time as well. Go Seigen vs Kitani Minoru mirror go game is particularly famous.

Please do NOT use Mindzine material by John Fairbairn anywhere here.

Even recently, the place of tengen in the opening was the subject of Go Seigen's research. While tengen may not necessarily be the first move, Go Seigen views it as important part of fuseki, opinion consistent with his preference of large-scale development over currently popular territorial play and dislike for large-scale joseki. For example, he criticizes the current sanrensei opening as the worst kind of sanrensei and instead recommends the following two openings.

(See Pieter Mioch's interview with Go Seigen at MindZine: from

Another reason given by professionals as to why tengen is not played at move 1 is that it usually leads to a loss. A figure often given is that Black loses around ⅔ of the time.

The diagonal tengen sanrensei fuseki has been studied by go master Guo Bailing (c. 1587 - c. 1662) under the three-stone handicap setting in his book Sanzi Pu. The title of the English translation is Three-Stone Games. 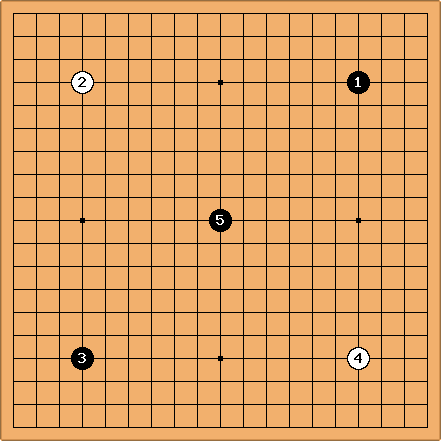 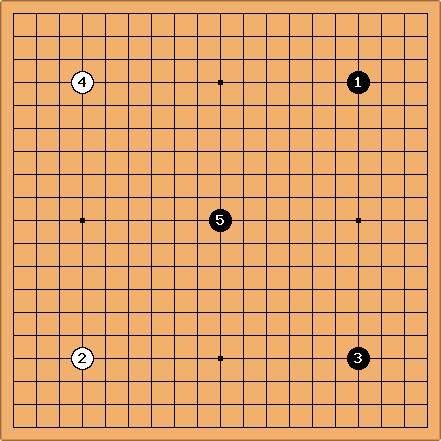 For possible variations given tengen as the first move in particular, see Tengen openings.

Davou I was playing rengo with a 7d once, He was on my side, and Before we started I asked him If I may open on the tengen. he said it was fine, and I did.

My idea about opening on the tengen was to have a stone twords which to run my weak groups, and preserve connectivity through the game. But what he did was strange, he played a fuseki that completely emphasized the tengen. 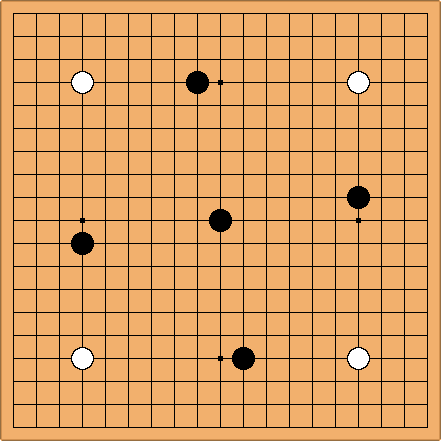 Thats the opening. black disregards the corners in favor of producing a strong base from which to create large scale fights all over the board.

JohnMoser: This particular fuseki needs a name. It looks like a rotating star, like the classic hira-shuriken (throwing ninja star)... which was originally a 4 pointed carpenter tool for pulling up nails called a senban. SenbanFuseki? 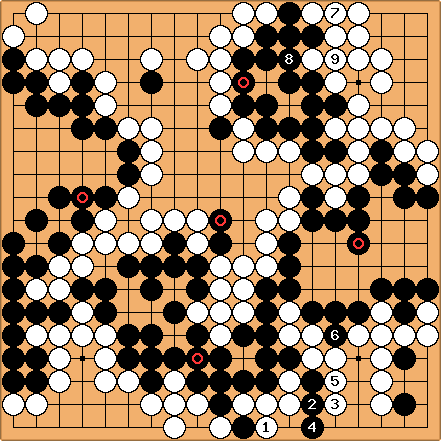 Here is the last 10 moves of a game I played against my teacher (Burzos 4d) using this fuseki. Obviously he was going easy on me, but I think this was still a fair demonstration of the adaptablity of this fuseki.

In this case fighting white was not a great idea. he had superior sense of shape, counting, style, and he was by and far more awesome than me, but I think that the strong fighting power I got from this fuseki discouraged his brutally attacking me left and right.

Tapir: I'm not much stronger than you are... however not counting captured stones and komi this game looks like white 109 vs. black 45. I would not call this a success. More so since Black didn't use the fighting power for fighting, but for making (small) territory on the side. (I guess the first white stones where on 3-4 points.) Especially disturbing is the fact that white who started with 4 separated stones in each corner is finishing with one big group while black was separated into three groups and was made to live small in the upper right. I thought the point of this fuseki is giving a territorial lead to the opponent for influence. Then not to use this influence for fighting is a sure loss, in my opinion this is the wrong attitude for this type of fuseki (even against someone 10 stones stronger). I would try to play good moves until I will eventually fall apart against someone so much stronger, but it is not good to play for a sure defeat. I would be much more proud of a good fight waged against my teacher even if I make an error at last forcing me to resign than playing contradictory = bad moves from start on. Just my 2 cents.