The resulting position looks like a four-point hira-shuriken, which originated as a carpentry tool called a Senban.

White should normally take the corner points first, making this fuseki easy to play. While Black gets a decent framework to run to the center, White gets corner influence. Black also ends in gote: White

takes the next move. On the other hand, any approach to any undeveloped corner by Black takes strong sente, as White losing a corner will improve Black's strength immensely and White cannot risk forcing Black to tenuki to a joseki elsewhere that Black may finish in sente. By the same token, Black must defend the sides, else he allow White influence of half the board plus two corners to attack black from. 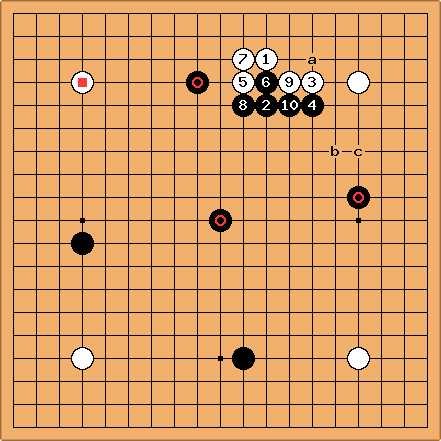 To fully develop this opening, Black must know some side joseki. Black will want to send White closer to the center, away from White-occupied corner star points. White's approach to the center moves toward Black's influence, giving Black the advantage here. Further, if Black manages to end a play in Sente, he may attack isolated corners-- for example, approach

This ideal approach becomes extremely difficult for Black, however. See

, Black a, putting Black a in an inescapable pincer. Further, notice the given non-optimal sequence gives Black the center in the upper-right, but gives White a quick way to claim the upper side. The three marked black stones now have good influence with each other; but White can reach the marked corner stone easily. Omitting

White's escape to the corner provides White with a great defense and a huge opportunity to enclose some side territory. If Black attempts to prevent White's side and corner territory from forming, White can move toward the center and squeeze Black's shape. Black's great strength in this fuseki lies in his side connections to center influence, so Black must not allow White to cut his stones. Because of this, White should attempt to cut through Black.

Additionally, in this diagram, b represents Black's best connection between

and the side; therefor, b would make a good play for

to threaten invasion and set a base. c may seem more obvious, easier to defend, but less threatening to Black.