A ten thousand year ko precipitated a rules crisis in the Nihon Kiin 1928 Fall Tournament, before there were written rules. The players played as members of two teams, East and West. In the following game Segoe Kensaku, then 7 dan, leader of the East team, gave two stones to Takahashi Shigeyuki, then 3 dan. Takahashi was a promising young player, having beat the rising star Go Seigen with White some time before this game. Many expected Takahashi's win. However, the game went very wrong for him (look at the upper left corner in the diagram); he was nearly 20 points behind in the endgame... 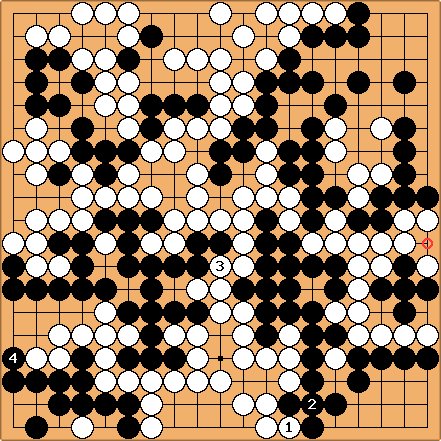 The ko is on the right side. White cannot fill at

because the surrounding White group would be dead. Black could add a stone inside to make atari and then if White captured Black's stones it would leave a rabbity six killing shape.

Segoe said that there was nothing more to the play, but Takahashi folded his arms and looked at the ceiling. Finally Segoe filled a dame (

) and so did Takahashi ( 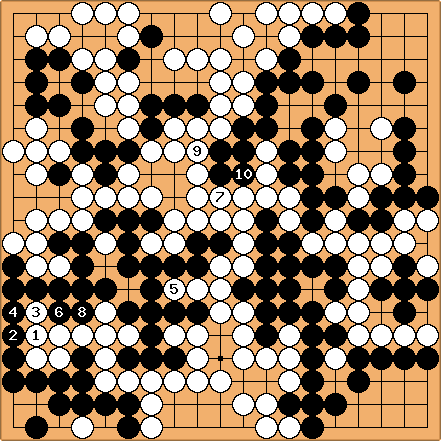 Then the players filled the rest of the dame. After Black had filled the last dame Segoe laughed and said, "I don't know, what's happened?" (Saate, yowatta na.)

The referee, Iwasa Kei, told Takahashi to take the ko and fill it and then count the game. But then Kubomatsu Katsukiyo on the West team came over and said that there was a problem, that as long as the ko was unresolved the game was not over. (The implication being that, since Black left the ko unresolved, the game was hung, without result.)

The game precipitated a month-long dispute. Finally Honinbo Shusai and Baron Okura Kishichiro made a curious ruling without explanation: White won, but Black did not lose.

This dispute, and the problematic ruling, provided a major impetus to the eventual codification of written Japanese rules in 1949. The Oteai changed from a team competition between East and West to a tournament for individuals. And Kubomatsu apologized for complicating the situation.