This can mean playing a move that denies your opponent two moves. This means you have "taken" three moves with your play, so an odd number of plays becomes even. In practical terms, usually you deny your opponent one move simply by playing where he would like to play (Your Opponent's Good Move Is Your Good Move). So you need to also deny him a potential follow-up move, and you will grab tedomari.

Bill: How about an example?

The other possibility for gaining tedomari is to play a move that gives you two independent follow-ups at the local temperature.

Bill: I think that he means that they are miai, and so cancel out.

I'm sure there are other tricks, anybody want to post some?

Bill: (Much, much later.) Reading this again, I think maybe he's got it backwards. Generally you want to allow your opponent plays with follow-up moves of the same size, because that gives you more chances to make the last play. For instance, Black facing an up plus a star should not play the up, which has a follow-up for White, but should play the star. Now when White plays in the up, Black can reply in the follow-up move and get the last play.

moved while making WME - don't know a good place for it

Bill: Thanks, Andy. :-) However, that is not really a tedomari problem. See Numbers.

Can you explain the distinction?

Bill: Sure. The point of the numbers problem is making the largest play. 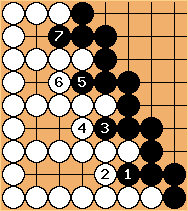 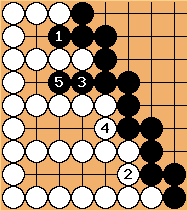 xela :but if white responds this way, then white gets 7 points and tedomari: 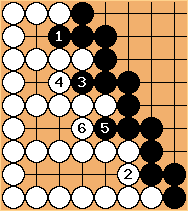 tapir: How much can I gain by Tedomari? The amount temperature drops after the specific tedomari? So how much would it be worth to get the last opening big point, the last big endgame point and the last point?

tapir: Can one consider ko as a temporal increase in temperature which falls back to average after resolving the ko / playing out the last threat. Would not a ko fight then be just a variant of a fight over tedomari?

Bill: I have dubbed a komaster who has enough ko threats to lower the ambient temperature before winning the ko, the komonster. Being komonster is like getting tedomari.

The two examples below from Jesusin were moved here from Ambiguous Position / Discussion:

--Jesusin (3K): I am confused about the following position. 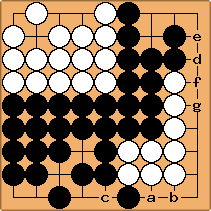 Please help me! I can't understand it!

Robert Pauli: (Years later) My substitute would be

PJT: See question below about ambiguous sente Bill: a is not ambiguous, it is a sente.

After you solved the problem, and before you proceed in the original thread, take two copies and try again!

Bill: First, to address the life and death issue. 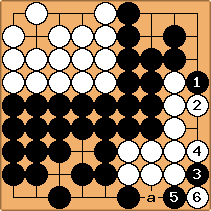 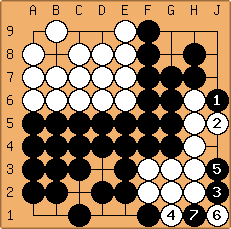 Another way to make ko. 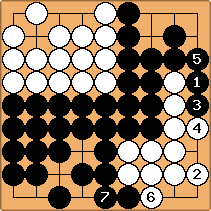 Let's make it easier by giving White [and Black] another eye. :-) 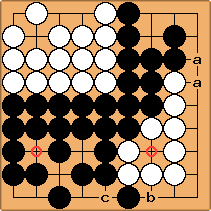 The players prefer different plays because they are trying to get tedomari, the last play. Getting the last (one point) play does make a difference of one point, here. 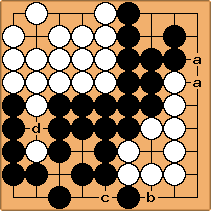 But you have to take miai into account. In this diagram a and d are miai. That means that Black should play at b to get tedomari. 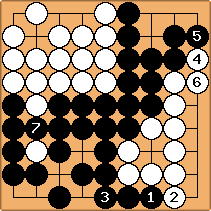 Black wins by one point. 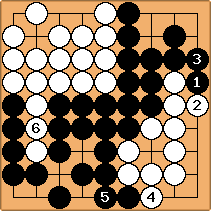 I have been working on this and I now think b in 'Diag: Which one-point play?' is sente for White and is a 1/2 point gote play for Black. I will try to prove it:

Here a is a 1/2 point gote [and b a 1 point reverse ambiguous sente]. If it was White's turn, she would take her sente at b and then a to win. If it is Black's turn, Black b, White plays atari, Black connects, White a is jigo. And Black a, White b, Black connects is jigo too.

Bill: Basically the size of a play is a local phenomenon. It is not true that, on the whole board, the largest play is always the best play, nor that two plays of different sizes always lead to different results.

After White 1, White 3 gets tedomari, for jigo.

Now Black gets tedomari, but the result is still jigo.