Here are the continuations for Takemiya's Kosumi when White plunges into the 3-3 point straight away. 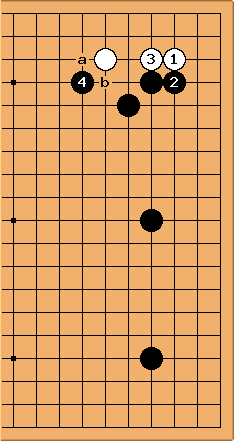 The basic continuation if White jumps into the corner is for Black to block White off from the right side with 2. White connects her stones, then Black presses with 4. From here White has a choice of extending with a, or pushing with b. 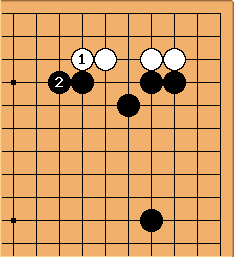 Extending is the simplest continuation for White. She ends up with secure territory and sente. One cannot help but think however, that this is a little submissive and that White is just going along with Black's plans. White may be a little reluctant to allow Black to gain this much thickness. Because of this, white more usually cuts as in the next diagram.

I tend to play this opening as black in high handicap games. With the hoshi stones in place, Black will be ecstatic if white takes the submissive extension line.

Black may even get aggresive and try 2 at a, which in my experience fails miserably. 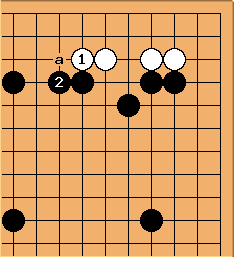 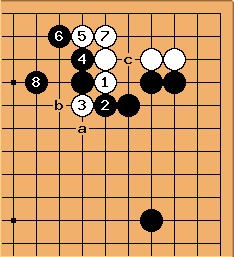 Pushing and cutting with 1 and 3 is an aggressive way of playing that shows fighting spirit. Black next desends with 4. White must take care not to play at a or b yet, otherwise, Black will respond with the wedge tesuji at c. Up to 8 is one usual continuation. Next White should extend to a. b is also possible but it doesn't put much pressure on the black framework. 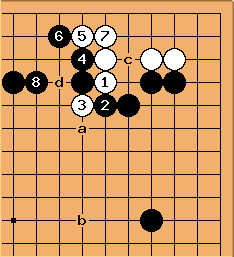 I tend to play this opening as black in high handicap games. With the hoshi stone in place, is 8 still needed or should black play elswhere, perhaps a, b or tenuki?

Steve Kroon (2k): As I understand it, the push down at 4 and the hane at 6 are to help develop Black's shape together with the jump at 8. However, with the hoshi stone in place, after this sequence Black ends up overconcentrated with his hoshi stone not really doing much. In this position, I'd recommend extending in the other direction, to d instead of 4. This puts pressure on 3 immediately, threatening a large framework, while keeping any corner aji for later. (Effectively, in the standard sequence, black uses up some corner aji to make shape on the top, while if the hoshi stone is already there, this is not necessary. Later, Black can attempt to use the aji left in the corner, or gets an extra move if White takes gote at some stage to patch up any corner weaknesses). 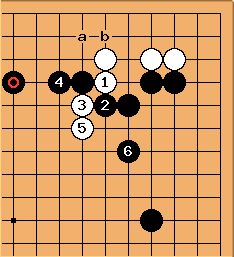 unkx80: I agree with Steve that

would be a better move, because it works better with the

stone. As a result, there is no need for

to defend on the upper side. Later, Black can look forward to the forcing move at a. 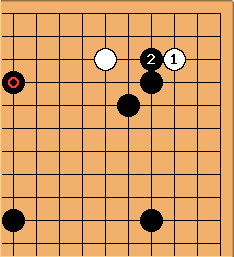 stone in place, I think that

Milo234 kgs 2d? I disagree with Bill. Blocking off the right side is better because then when black plays the keima all of his handicap stones are working effectively. If the sequence is played as Bill suggests then white will play the standard sequence coming out of the corner. Then the original diagonal play on the 5-5 point will be in an awkward place and be overconcentrated. Also this manner of play leaves behind lots of aji for white to later exploit. Given that we are discussing this for high handicap games a thick playing style quickly settling the board is ideal and leaves behind fewer pitfalls for black. 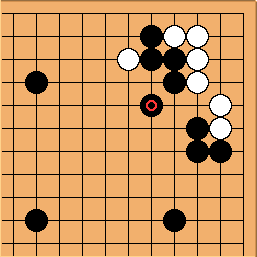 Bill: So the claim is that this is worse than letting White connect her stones? That the

stone is inefficient? That this is not thick play for Black? 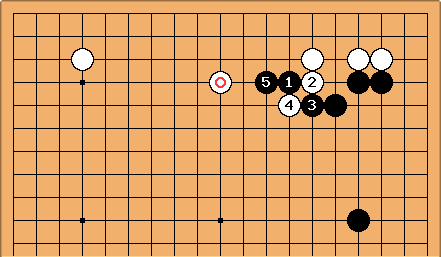 If White has an extension like the marked stone in place, the press at 1 is a little more dubious, but still possible. Black should extend to 5, however he should take care. Since White probably played first in the lower left, the ladder is probably not good for him. 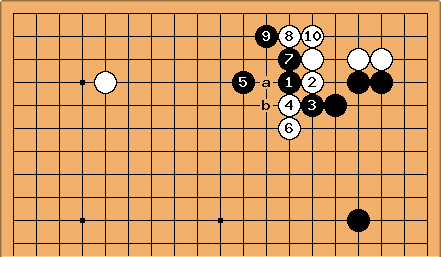 A third possibility black has after the cut is

, leading to the same position we saw earlier. 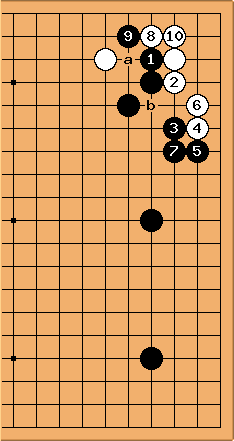 Black 1 is a counter-intuitive play, breaking with the common wisdom that you should block from the side which you have an extension. Black continues up through 10, sealing White off from the right side and gaining powerful thickness along the top side. Black almost never connects at a, instead choosing to take sente, often using it to strengthen his presence on the upper side. The White cut at a is small and Black will probably just ignore it.

Zook: I am willing to accept that there is a stage of the game where this cut is small. But the whole variation starts from the assumption that the top side is important. So if White can make it considerably smaller, while making points and removing any endgame against her corner, moreover threatening to cut off stones at b, the cut will very soon turn into a big move, no ? Anyway, I don't like Black's choice of blocking off the 3-3 invasion here.

White 2 at 8 is a serious mistake - however, Black must respond with 2. The results is gote for White, giving Black a much larger piece of the corner then in the original sequence.

This sequence does end up sacrificing more than the usual amount of territory for thickness, so Black must be prepared for this when he chooses to block on this side. This variation is not recommended for anyone who does not have confidence in their ability to use thickness. 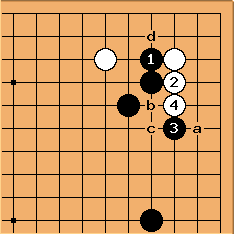 Klaus Just a naive question: what happens after 4 ? Does black answer at a (after which white will probably play b or does white draw back at c? And when should one play d? I am getting confused. Can anyone help me?

BlueWyvern I'll try and see if I can work it out. I think black draws back to c, but I am not sure. I remember asking this same question at the club and two 6-7 dan players worked it out and came to the conclusion that white should not play 4, but it was very complicated.

Klaus Hi, I am still hoping for some sequences here. Can someone help me out?

iopq: There is an interesting game between Takemiya Masaki and Lee Chang Ho that features two Takemiya kosumi and two of these corner invasions with blocks from different sides as well as a game-winning B2 Bomber. 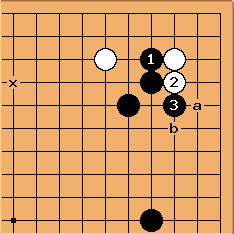 pashley Why is 3 is previous diagrams not where I have it? To my mind (low double-digit kyu) my 3 looks better. Either a or b can be answered with the other. What am I missing?

will play at a. Then Black will be building a wall that does not face the sanrensei (there is a Black stone on the lower right).