From a linguist's or lexicographer's point of view, words typically have more than one meaning. I can identify three main senses of sente, for instance. This point of view is descriptive: how do people actually use the word?

There is also a prescriptive point of view: How should people use the word? There is not always agreement on this, of course, or else people would use the word as they should. ;-) From a technical point of view, it is nice to make a clear distinction between synonyms, so that they do not overlap. One may then prescribe a meaning for a technical term that is narrower than common usage.

In the case of sente and kikashi I think that there is plainly an overlap in common usage, rather than a clear distinction. (And this does not bother me. :-)) It is a question of nuance. 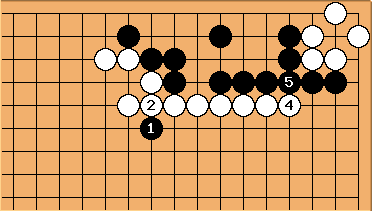 I'm not living in Japan, now. Maybe DaveSigaty would like to check my sense of usage.

DaveSigaty: I can't clarify the actual usage. I would like to blame my Japanese ability but I suspect that also my general conversations about Go do not rise to the necessary heights :-)

I think that the following is very interesting. It is from Brian Chandler's "Translator's Notes and Terminology" at the beginning of Beyond Forcing Moves:

"As I was browsing in the Nihon Ki-in bookshop one day the Japanese subtitle of this book caught my eye. It is simply kiki kikashi. The obvious translation, though not a very helpful one, is simply Forcing Moves and Forcing Moves. The first term kiki refers simply to moves which force a particular reply. Although kikashi is also translated as 'forcing move' a nuance is lost by translating this word the same way.

To clarify the difference, it may be enlightening to look at the original Japanese terms. Kiki and kikashi are the noun forms of the verbs kiku and kikasu respectively. In normal usage kiku means simply 'work' or 'take effect', in the sense that aspirin 'works' for a headache. Kikasu is the causative form of the same verb ('cause to work'), and in ordinary language it is hard to attach any particular meaning to it. In other words, a native speaker of Japanese knowing nothing of Go would not understand its meaning immediately. This suggests that a special term is in order in English, too.

There is a third grammatical variant of the same basic word, which is kikasare, or very literally 'suffering by being caused to work'. Basically this is the passive form of kikashi, so it means that you have let your opponent gain some kikashi value against you.

Here is my attempt to define these three concepts, together with a list of some of the terms you may find used for them.

kiki - a move which the opponent must answer in a particular way; a move which forces a reply; a move which is sente against some stones, or threatens to live/kill; leverage. ('Leverage' is my own coinage, and it is intended to be more or less self-explanatory. The aji in your opponent's stones is the raw material against which 'leverage' acts; conversely, thickness is the property of stones against which you can get no leverage.)

kikashi - a move which exploits an opponent's forced response to provide some gain.

kikasare - letting the opponent make an effective kikashi against you. I have used 'being kikashi'd' (being forced; playing submissively) in this book. It is not an expression I think particularly elegant, not the least because I am not sure how to spell the past participle of the verb 'to kikashi', but I hope that it gives slightly more of a hint as to what is going on."

In addition to the help with the meaning of kikashi, I also like this for the definition of thickness which is different from (and I think more subtle than) the way I have thought about it up to now.

strongeye: So, could a ladder breaker be considered a kikashi if its in sente?

Andy: The impression I get from reading English go literature is that the difference between "kikashi" and "sente" is that a kikashi stone is not immediately useful: it might become useful later or never depending on how subsequent play develops. In contrast, a sente play is one that has immediate value at the time it is played, that is, there is less of a speculative future value consideration of a sente play compared to a kikashi play. By this reasoning, in the examples on this page, the isolated peep at the tiger's mouth is kikashi, but the extension of white's wall threatening to kill is sente.

Bill: Good point, Andy! :) I think that what you say meshes with Sakata's explanation. Besides being sente, kikashi does work. The value of that work, as I see it, is not immediately apparent, but depends upon future developments. However, in the proverb about taking kikashi before living, the value of the kikashi is often immediate. Like most of language, things are not unambiguous. ;)

xela: It looks to me as though the "extension of white's wall threatening to kill" example is meant as a contrast with the previous example, to illustrate not-kikashi. The comment that

shouldn't be sacrificed is what gives me that impression--therefore it's not kikashi irrespective of whether it's "really" sente?