Force your opponent to start a ko that he cannot win

When you are in an advantageous position, it may be possible to seal the game by forcing your opponent to start a ko that he cannot win. Usually the ko is such that you make a significant gain while your opponent has no ko threat of at least the size of your gain. As such, winning the ko settles the position and simplifies the game considerably, leading to a clear advantage.

This idea may not be intuitive to amateur players, as it involves starting a ko, which is seen as something complex. However, this technique sometimes appear in professional games. Applying this strategy effectively requires accurate assessment of the value of ko threats, as well as the value of winning the ko. 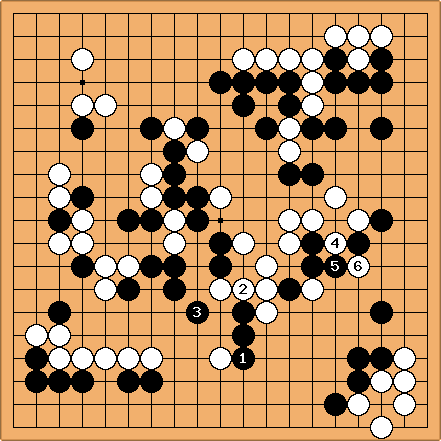 here is not meant to kill the White dragon, but to seal the game. White can only start the ko with

. Other than that, White has no other way of making sabaki. 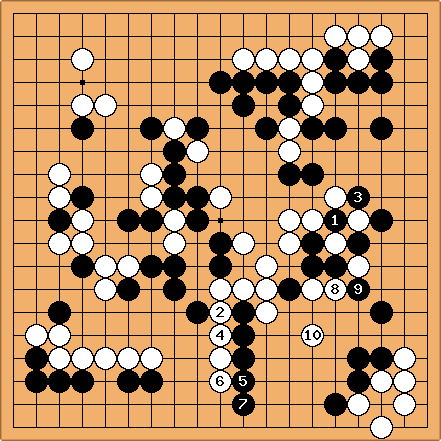 captures and finishes the ko, the entire right side becomes Black territory. On the other hand,

merely connects the dragon out, and are hardly worth any points. It is now clear who the winner is.

White resigned shortly after this.

"... is to force your opponent to start a ko that s/he cannot win." = the means for the aim; but is it a game deciding ko AND if you know that s.o. cannot win s.th. have you won already?

unkx80: Okay, I think the problem is in phrasing. Perhaps "winning position" should be "advantageous position", so I have rephrased it accordingly.

By the way, a lot of things aren't obvious until you are told how to put together the various pieces of information. Then they become obvious once you have 24/24 hindsight. =)