A mutual ko threat, also referred to as a double ko threat, is a position which can be used as a ko threat by either player, leaving no threat for their opponent. It is thus only a threat for whoever plays there first.

A mutual threat is usually a miai in which each player makes a play, regardless of who plays first. It can also be a local ko threat, as in an example of removing a local threat, or non-local, as in the following examples.

Typically a player should play all mutual ko threats before starting a ko fight to prevent the opponent from playing them, so they are not normally used in ko fights. See remove double threats before you first capture the ko.

In this position, Black typically gets a and White b. Either black a or white b may be used as a ko threat, threatening to gain 6 points in two moves.

Both players mutual ko threats can happen to be on the same spot. 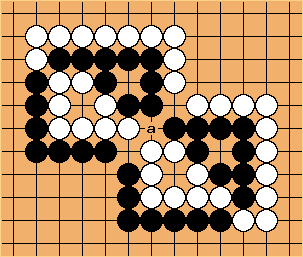 Here a is a mutual ko threat for either player, threatening to cut the others group apart. (Neither should use their "threat" on the other side :-)