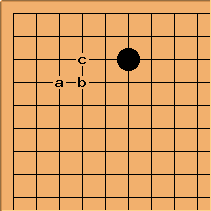 While being the standard approach to a 4-4 point stone, the 6-3 point is rarely played as the first move in the corner. It secures a foothold on one side and invites the opponent to jump into the corner, often leading to double approach or tenuki joseki lines that are not bad at all for Black.

There's also an article on a 6-3 fuseki by Miyamoto Naoki on gobase.org which is pretty interesting:

for developments after White at a.

Variations after White at b are at double kakari.