In Lessons in the Fundamentals of Go, the author Kageyama states that when there are two ways to capture with one move, then the firmer is correct. 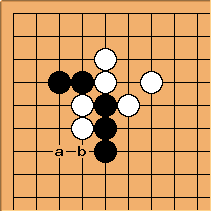 In this example the two white stones can be captured with a net by playing at a. However, according to Kageyama, the correct move is b, which has a firmer grip on the two stones. (See /Demonstration)

This example was given by Feng Yun: it was from her game 1994-06-11 against Liang Weitang. 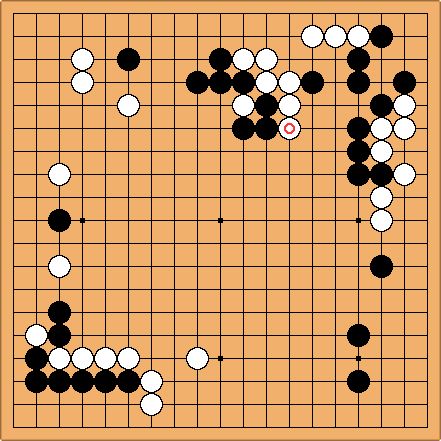 . Where now for Black? 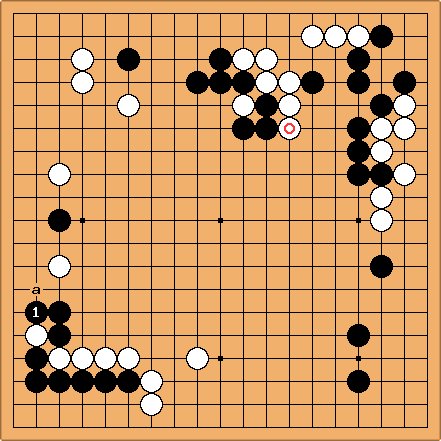 , and not for example Black at a. Feng Yun described this, in her commentary (British Go Journal 96, Autumn 1994) as a "professional move"; and also the best local play. 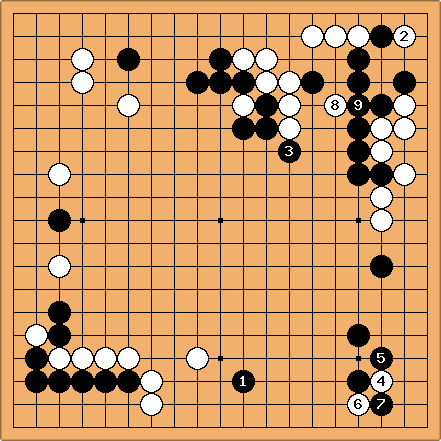 is the normal extension from the bottom right corner. After

probes the bottom right corner, and then returns to the top right. 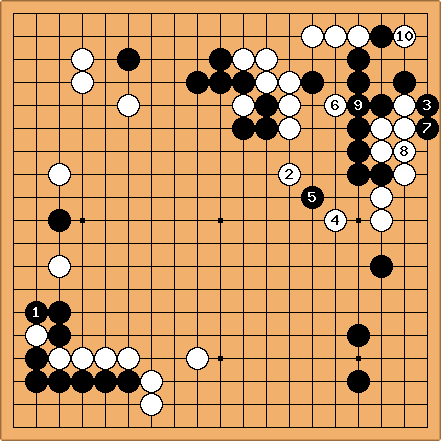 jumps out into the center and attacks Black's top right group. Instead of simply making life in the corner, Black counters with the hane at

. This is as far as the commentary shows the skirmish.

Alex Weldon: There's something about this proverb that bothers me. Unless he also gives an objective definition of what "firmer" means (less liberties? That can't be it, or else a ladder would be "firmer" than a geta), I would read "firmer" to mean "with least aji." But since aji is bad potential, this just boils down to "Given a choice between two methods of capturing, the one that leaves the least bad potential is better," which is starting to sound an awful lot like a circular argument.

DJ: Alex, I think you're basically right (and I do not see any circularity...): I believe firmer does mean with good aji (see also my comments at Non local move versus a local move).

Alex Weldon: The circularity is not in defining "firmness" as "with good aji." The circularity is in stating that out of two ways of capturing a stone (or stones), the firmer way is better. On the surface, it sounds like wisdom, but it boils down to "out of two ways to capture a stone (or stones), the one with better aji is better," which is a tautology.

Gregory Wonderwheel: Unless "firmer" has a special meaning in Japanese Go jargon, at face value of the proverb, I take "firmer" to mean "with less cutting points" because that would reduce the number of possibilities for peeps before the capture, thus reducing the options for the opponent. Thus a short ladder could be firmer than a large net, and vice versa, a small net is more likely to be firmer than a long ladder.

Dieter: I believe there is this trade-off with ladders and nets.

I believe Kageyama's statement is that the long-range effect of a ladder in general is a heavier burden than the multiple short range aji of a net. As always with heuristics there are quite a few exceptions imaginable. In particular when the range of the ladder is rather short, it will most often be preferred over the net.

BTW, I would not call "the one with better aji is better" a circular statement, but I agree it just shifts the problem to the definition of good aji.

Notochord: Only if you consider aji to be the only characteristic of a position, which is stretching the definition a mite too far, I think. The point is essentially that the issue of aji, of giving those (most usually cutting) stones as little room to maneuver as possible, is often by far the most pressing concern. You should as a general rule play as tightly as possible, and avoid thinking that any move that succesfully makes a capture is just as good for the purpose of capturing as is any other move which does the same. As something of a corellary, I think that a main idea of the statement (Proverb?) is that we should not try to stretch our shape too much in capturing vital stones, in order to (for instance) reach towards some other position, and thus make our move 'less gote', since this usually creates a great deal of bad aji for the opponent to exploit which overwhelms the minor gains made from making a looser, weakly double-purpose capture.