ThorAvaTahr: I am searching for a page about the following situation: 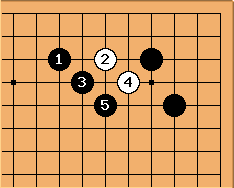 ThorAvaTahr: It is a standard pattern, (midgame joseki) but I am unable to find it on senseis. If it doesn't yet exist I think it is worth a page. If it does exist please help me find it. (how to find a page about this?)

Bill: This is not a standard pattern, as far as I can tell, much less joseki. In fact,

looks pretty bad to me. ;) And even without

I do not think that it is standard. For one thing,

is unusual without White stones close by. 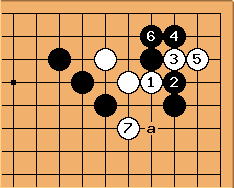 ThorAvaTahr: By heart I think the sequence should be something like this, though I am not sure if the result is good enough for white, because of black a

fractic: I'm not sure about the sequence, but what would you call good enough for white? Black did start with a 3 stone advantage afterall. 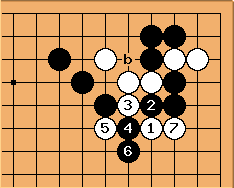 kb: I wanted to show why White can play at a.

is important, because now the Black ladder starting at b fails. 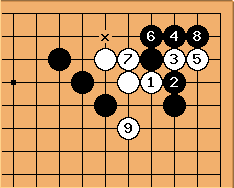 Andy Pierce: Ishida/Davies also seem to imply that it is better for white to force with

here so there are no ladder issues for white and to prevent black from linking up at x.

Bob McGuigan: This situation is discussed in chapter 8 of Attack and Defense by Ishida and Davies. According to the book

in the original diagram is a "failure" because White can get out as shown. Since this is a middle game sequence the best moves depend on what is going on nearby. Ishida/Davies proposes something like this diagram 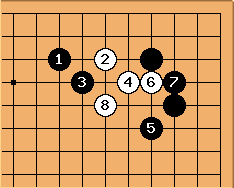 The resulting running fight looks good for Black since White is running and Black is making territory on the right. I think White can't play the invasion at

unless there is some support on the upper side so that

are under attack when White runs out. 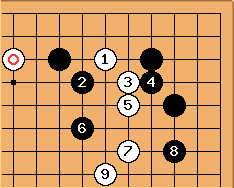 Bill: This kind of play might be considered more or less standard. Note the existence of the

stone, which helps to explain both the invasion by White and the short extension by Black.