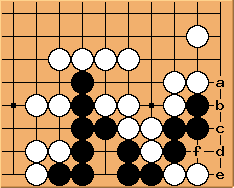 First, let's try all the moves including tenuki. 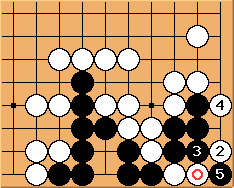 'e' in the Main Diagram is the same. 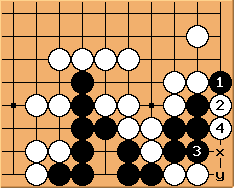 , it doesn't matter black captures with 'x' or 'y', white can throw in and black has no eye in the corner. If black plays 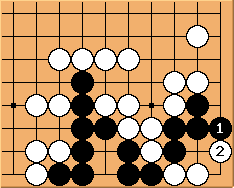 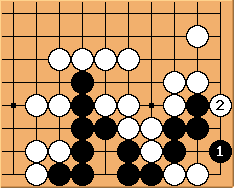 Two option left, let's see which one is better. 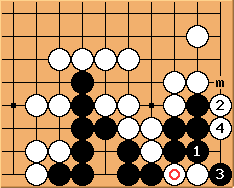 right the way, but it's sente for white, so it's reasonable to assume white would get them. Ko threat wise, white has 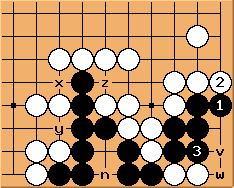 Notice black has to capture with 'w' later, so it's one point less than it looks. Also, if we assume the outside is going to be white's territory, then it's another one point less than it looks. The reason is: black won't get all three of 'x','y', and 'z', because the last one is going to be gote for black and sente for white. Ko threat wise, there's another ko threat before the end game at 'n' besides

. After that, there's another two-point losing threat at 'v'.

char: Tsumego with the word "best" in the description is scary, but I guess this is more like real game :/

xela: Indeed. Sometimes it's useful to make a distinction between "life and death" problems (any move that makes life is acceptable) and "endgame" problems (how do you get the most points?)--this one would then be in the "endgame" category.

By the way, it would be really funny if I missed something very obvious after all this rambling =(.

unkx80: Very nice presentation of the solution! The only mistake you seem to make consistently is in the diagrams - see HowToReadDiagrams#toc10.

Problem setting can be a very challenging exercise. In principle, I don't like setting problems with multiple (initial) solutions. Also, I would prefer not to set a beginner exercise that asks for the best move. In a collection of problems, I also try to give sufficient variation to the problems. Anyway, I suppose this best move problem is probably easy enough to be left in this beginner exercise series, so there. char: I corrected the mistake (hopefully, heh)

I didn't start to appreciate "the best move" type of problem until a while ago. I used to just look through the tsumego problems and if my first move matches the solution's, I just go to next one (and I know many people do that, too). However, I believe it's important to get rid of that habit, so in my opinion this is actually a nice problem even for beginners =).