Charles I think the efficient/effective distinction might help. I think heavy plays may be perfectly efficient (unlike overconcentrated plays): no waste, just not effective at getting life when that is what matters.

John F. I'm puzzled by this discussion. What Charles says is correct but seems to come at it from the wrong direction, I'd say.

Assuming that we are really referring to the underlying Japanese terms, a heavy group is defined as one that is a burden because it has to be saved and has to get two eyes. A light group is one that can be given up (seems obvious, but many people seem to read too much into the word light).

I think the confusion comes in because a pro can see that a group is heavy earlier than we can, and uses the term when there are hardly any stones around - which seems to make people think it's to do with shape. But shape is local, tactical; heavy is strategic.

BTW someone has posted somewhere korigatachi as frozen shape. No - it's congealed, grown stiff, , sclerotic, overelaborate - from koru not kooru. No doubt the words are cognate but they are now different.

Charles It isn't safe to assume I'm referring to Japanese usage - I don't have the scholarly knowledge to back that up.

To illustrate the point I'm trying to make. 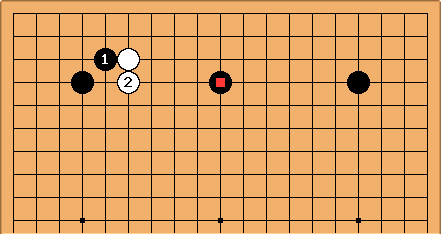 This kind of position is discussed often enough on SL (see in particular diagonal attachment - as inferior shape; and the rest of the diagonal attachment path). But the basic point is worth repeating, because it in my experience is often not understood by players quite close to dan level.

The second point is why

here is honte in most cases; and why

should not in general be played without a stone such as

in place. White's heaviness and the improved effectiveness of the 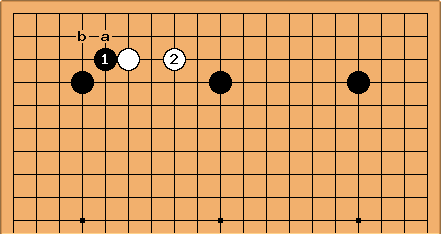 If White has a real strategic need to play lightly, she has to think more in terms of plays such as

Possibly White should exchange White a-Black b first: it's not such an easy call, especially as White may be planning to set up a ko shape here.

But in any case that's a contrast. 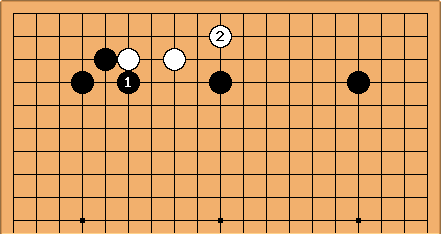 It for example assumes that White would be happy with the

Black's shape is now most effective in the left corner: White is low. The loss in terms of influence is considerable.

There is actually a third thought. 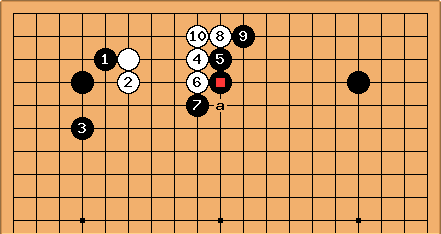 This sequence is not joseki (see angle play after diagonal attachment). Black 11 at a.

Suppose all White wants is to live. What you could call a single-issue shinogi strategy for this part of the board. This particular strategic concept seems to fall through the net: it's about living in place rather than straggling out into the centre.

Whatever you call it, I notice the part it plays in the thinking of strong amateurs. Matthew Macfadyen calls this 'digging in' (but overloads that term with another related concept). I actually prefer Robert Jasiek's term 'installation'. This fits in with the virtual group concept: looking at frameworks in terms of groups you might install, that is, create in a given limited space.

The way White plays here cannot reasonably be described as either heavy or light, I think. It is effective in its own terms (White has a viable group in a tight spot). It isn't joseki, because Black's stones are also acting effectively. In a word, not an artistic way to play.

Bill: White's play in the Installation diagram looks heavy to me, because it lacks flexibility. White has succeeded in her purpose, but maybe a more flexible goal would have been better, one in which some White stones might be sacrificed. If we accept White's desire to live, then, yes, whether her play is heavy or light is irrelevant. But is mere life good enough? As a rule, single purpose play is not good enough in go. (OC, we are seeing only part of the board.)

Charles The opposite of flexibility being rigidity, this gets us into an interesting area of theory, I think. Many heavy plays are too rigid, but not all rigid plays are heavy?