A basic way to think of it. Heaviness is a description of inefficiency. The game is almost entirely about the efficiency of movement, thus creating heavy shape is ultimately just a symptom of the disease called inefficiency. Shapes in the endgame may look heavy, but only as necessary, and then only as the territory has been essentially secured. If such heaviness appears early in the game, is a clue that a player's thinking is not yet geared for making moves that count. Thickness can be heavy shape, and is effectively so, if it is not put to good use by extending from that thickness.

Dieter: I suggest: weak and not easily sacrificed.

Bill: I used to think of heavy and light in terms of shape. I came to realize that often it is not the shape that matters, but what you do with it. Now I think that the most important aspect of heaviness and lightness is attitude. :-)

John F: Yes, that's a nice insight, Bill. Regarding the comments above. I disagree completely that thickness can be heavy. A thick group is by definition safe. A heavy group is by definition a burden. I suspect the writer is mixing up thickness and influence. It might be a useful corrective to take Bill's advice to extremes and forget shape altogether.

Velobici: The comment above "extending from thickness" seems to have the wrong connotation. Rather thickness is to be used to threaten, and thereby either forestall or render ineffective an opponent's position near that thickness. Due to this one can play farther away from one's own thickness than an extension would allow. This creates another group that further threatens to damage or kill any stones the opponent may play in the area between the two positions. In the end, the territory appears as if my magic due the opponent not playing that area. Comments please. I may well be misunderstanding this.

Moved from heavy by Charles Matthews.

Charles Well, that was all one posting. I wanted it off the page for heavy, since it's really misleading. It might be time just to edit it all out: we are usually chary of deletions.

Sebastian To continue this page as what appears to be its purpose - a discussion page: I trust your experience when you say it was misleading. Since I am only a beginner I like "basic ways of thinking", though. In particular, the notion of efficiency really appealed to me. What's wrong with it? -- 2003-09-19

OK, I have my own complaint about shape (maybe because I've been losing a lot of games lately?). "Light" play is good, and "heavy" is bad; yet "thick" is good, and "thin" is bad. So we want to make light, thick plays? And avoid thin, heavy stones? Is this not a Thin vs light?
-- TakeNGive 11k

Charles Matthews Good point. It's a question of appropriate technology. While you are defending, light is good. If you want to attack, thick is good. If you can't quite figure out what you are doing - at least don't blame shape ...

I think the diagram above is more a question about suji than about shape. If just for once I can cite my own book, p.179 of Teach Yourself Go is a problem set on this type of point. 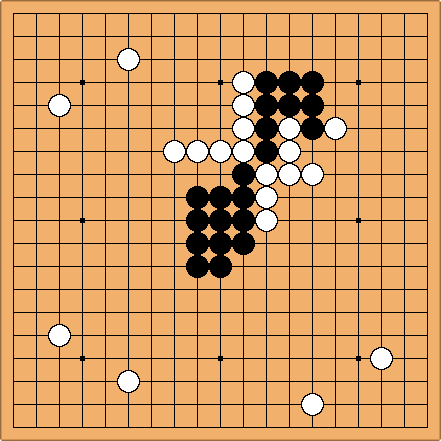 Methinks this is an example of what not to do in any circumstances, an extreme example of course. I think Black here is somehow thin, yet heavy... of course, you have to be pretty bad to be filling in your own eyes.

I think that thin/thickness and heavy/light are not necessarily the same thing. I would say, light/heavy play is the difference between "wasting moves" by playing in inefficient spots in a local area, instead of playing the bigger points. Thin/thickness has to do with defence, or how secure your position is, which usually corresponds with how many stones there are locally defending, but at different strength levels, it can depend more on, and here we have it, (da da da DAAAA!!!)... Shape!

Charles Matthews What that diagram illustrates is firstly Overconcentrated shape. Groups can be heavy without being over-concentrated (see discussion at heavy versus overconcentrated). Thin implies tactical weakness - insufficient defensive strength.

Jasonred I believe my example shows all three; heavy, thin, Overconcentrated shape. Yeah, forgot to mention, overconcentration is just too many stones in a local area that should have tenuki ed and gone somewhere else. Heavy play, according to discussion is "inefficiency". And you have to admit, the above is ridiculously inefficient, gaining almost zero territory, with few liberties, and barely any influence, with like 20 stones...

Charles Well, heavy isn't the same as inefficient or over-concentrated. It means more like 'burdensome'. And I don't think Black is thin there.

You probably can have thin+over-concentrated in a shape - it would be ugly in a primal way. 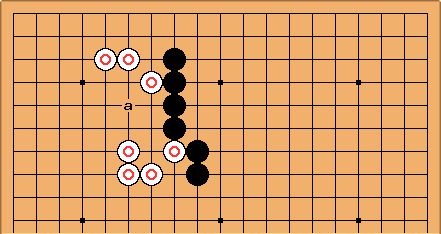 For example White's group here: in a minute Black can play at a to cut.

Since 'heavy' is a strategic concept, it is a bit harder to illustrate heavy+thin though that can happen too. One point would be that 'thin' implies you are about to be cut. A plan of allowing the cut, sacrificing half the group with gain of some time and forcing plays, and running with better shape with the other half, is often an antidote to the heavy feeling.