Bill: As his old games attest, this is new thinking by Go Seigen. The wedge always seemed obvious to me, but, since reading about Go Seigen's shoulder blow, I have been on both sides of the play. In my experience, it is a surprisingly effective reduction of Black's sphere of influence on the side. 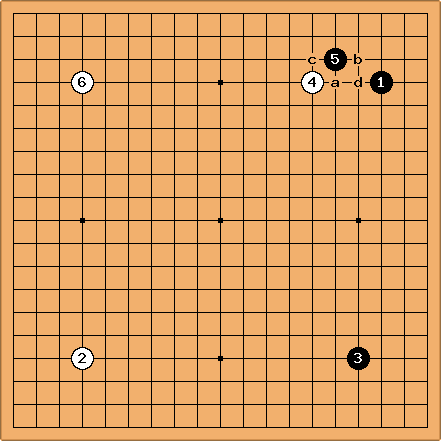 Dave: Not so new thinking really. The idea has been played a few times over the years, arising through various transformations of plays. It has never gained any consistent support at the professional levels.

Rich: Is there a strong refutation for a black tenuki, maybe taking the right-side hoshi? Or does the push right from

negate the influence on the right sufficiently? I could see Wa-Bb-Wc being more consistent play for White than for Black, I suppose.

dnerra: I don't think it is a refutation (I think a Black tenuki to approach the lower left corner is absolutely possible), but the normal White play in this position would be to block at c. White a is also possible, to which Black can reply at d (normal), b, or c.

Velobici: Why shoulder blow rather than shoulder hit...never seem that term before...just a small matter. Yes I know that both links lead to the same page.

Besides, the long Oh sound has weight. Cf. Poe: "Quoth the raven, Nevermore."

dnerra: Thanks for this page, Bill! I have to try out this move.

Bob McGuigan: I've seen this move in several games of O Rissei in the past, but I haven't seen anyone use it recently. Has the general pro opinion of it changed? Or have I just not kept up with recent pro play?

Velobici: GoBase has 23 hits for this position, the most recent 2002-07-06 between O Meien (White) and Yoo Changhyuk (Black). Of the 23 games, White has won 12 of them. Regarding the wedge moves, of which one might say there are three:

John F. In one sense this is not new thinking by Go Seigen as he was the first to play it, in 1934 (against Maeda), though admittedly by transposition. But in GoGoD we have no other occurrence till 1995 (in all we have 28 games) when Ogawa Tomoko tried it in the Oteai. A wide variety of players have tried it, split almost entirely between Chinese and Japanese. Koreans don't seem to like it. The only three who have tried it are Ch'oe Kyu-pyeong, Kim Su-chang and Yi Sang-hun Jr (the latter beating his brother Yi Se-tol with it).

I think it needs to be said that Go Seigen regards this shoulder hit as a probe. Also, the comment by Bill that it is a "surprisingly effective reduction of Black's sphere of influence on the side" combined with talk of the wariuchi on the right seems to be causing people to focus on the right side. In fact what Go Seigen is trying to get people to do is to focus also on the upper side, and in particular on the side areas between the corners and the middle hoshis. This is part of his Six Harmonies (or six dimensions, if you prefer). You're wasting your time reading about 21st century go unless you ditch (temporarily, at any rate) your conventional notions about fuseki.

As I understand it, another feature of Go's new ideas is the way moves such as the above set up nerai. At the risk of being glib, where Shuei was famous for setting up miai, GSG is taking this style a step further and setting up nerai. In his early days he was very fond of contact plays, not so much to cause fighting but to create nerai. In his new thinking he appears to have taken even this a step further and is eschewing contact plays in favour of plays, like the above, just a shade away from contact plays. I think the idea is more about strongly establishing a presence (to be "in your face") rather than starting a fight - i.e. strongly enough so that nerai are still created.

A further component seems to be that if a **very** stable group can be set up in these mid-side areas of the board, it appears to have a dominating effect on the game as a whole. Because it is unattackable there is no joy for the opponent in attacking in this area. But since in the process of setting up this group, you have forced the opponent to play on two sides (in the corner and near the middle of the side), it follows that the opponent has invested many more stones, and since he cannot gain anything more from attacking in this area, these stones are in grave danger of not giving much return on the investment. Setting up such a stable group is not easy, but when it happens it seems to win the game, in the examples I've seen. The effect it has it to turn the centre portion of that quadrant of the board into a waste area (for which reason I have called these groups Chernobyl groups).

It's all very difficult stuff and it's a great shame that GSG himself is no longer able to demonstrate his ideas in tournament play (O Rissei seems to be the closest adherent). His writings are rather wispy, but if you compare what he says in different books about the same position, and analyse his language (including what he does not say) - and have faith in his 6 Harmonies! - I think a pattern of novel thought does emerge.

crux: Can you name any example games with such "Chernobyl groups"?

John F. Try Cho Hun-hyeon vs Seo Pong-su, 27th Kuksu Final, Game 5, 1984-01-20. Note how the white group in the top right casts a spell over this area so that the NE quadrant is the last played in and yields virtaully no points. Notice also the rather poor return given by the two black groups on either side of it. (PS I have also called these groups Go Seigen groups).

Hyperpapeterie: I guess this is an old thread, but Cho U (not someone especially influenced by Go Seigen if I guess correctly), played it against Gu Li on 08-29-2008 in the Toyota Denso Oza semifinals. He didn't have luck with it, and ended up resigning.

Calvin: O Rissei's book Catching Scent of Victory has some discussion on this move. 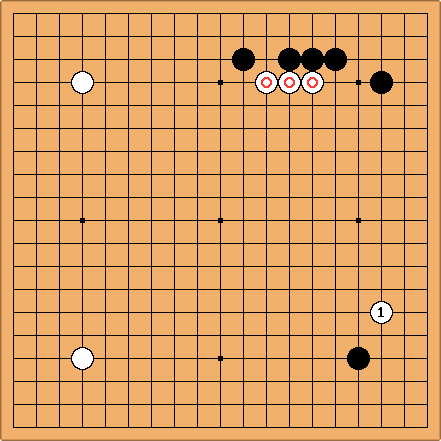 O Rissei says that in this game, white's three marked stones can be treated lightly, having created activity in the center. If they are useful for future fighting that's good. This attitude is what allows white to play