Get Strong At Kibitz 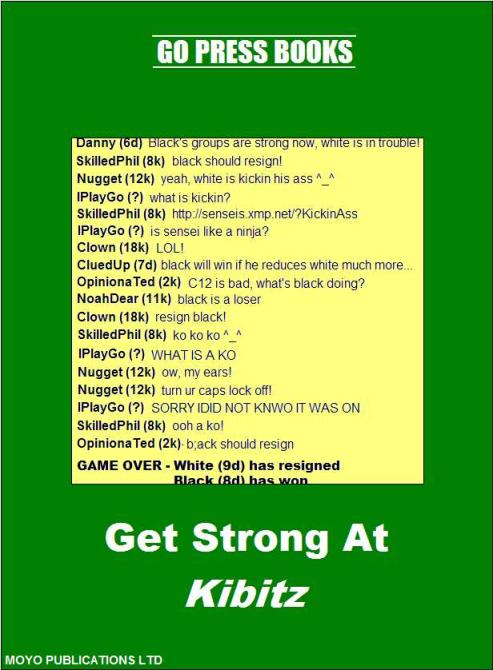 This fantastic new book provides the mid-kyu and relatively weak player with all the skills and know-how to become strong in the fine art of game kibitz. With this book you will learn many of the Professional kibitz secrets, enabling you to confidently and authoritatively kibitz the games of strong dan and pro players.

This book will teach you many skills, including:

Includes free introduction to the Kibitz Teaching Ladder. Have your kibitzed games reviewed by stronger kibitzers. One of the fastest ways to make progress!

Get Strong At Kibitz is available at all good bookshops priced £11.75.

Read some more Get Strong At Kibitz Extracts

dnerra: Do we really want such shameless advertising on SL? I think this page should be replaced with a neutral description and a link to the publisher's blurb.

Anyway, I cannot recommend this book, as it misses many important topics:

No kibitzer can hope to acquire mastery in his field without a thorough understanding of these topics.

Feel free to move this to /Discussion? if you think I am too harsh.

jared: I have studied this book, and it never mentions one important topic relevant to English speakers in particular. English speaking kibitzers should make every effort to kibitz in broken Japanese. Even if the kibitzer completely misspells a Japanese word, the comment will be perceived by other viewers as all the more meaningful, despite being in a language they don't speak.

mgoetze: Also, this book fails to mention a very important aspect of knowledgeable kibitzing - time kibitzes! There is a whole spectrum of skills to master here, from simply typing "TIME" without further comment when a 6dan uses up his fourth-last period of 30 seconds, to repeatedly asserting that a 7dan is sure to lose on time when he has only 80 seconds left for the next 6 moves.

Dieter: A vote for a special chapter about the unique art of arguing who might be the best player on the server and who should play whom next. "After this game ...", "He's strong, but I wonder ...", "He got no chance against ..."

Joonas Tyystjarvi: this book also had nothing about punishing kibitz mistakes, which in my opinion is a huge flaw, since this is one of the fundamentals of kibitz. Being able to point out kibitz mistakes credibly can easily make one 2 stones stronger (in kibitzing, of course).

Reuven: This book sounds good for beginners... But don't you think we should have something better? Lets all bug Zerokun, and maybe he'll make something which'd be worth a reading even for the advanced kibitzer? ;P

Fwiffo: Does this book have a chapter on criticizing the score estimator? I'm well practiced at counting poorly myself, but I need to get stronger at mocking the SE which is critical topic for a kibitz book at this level.

holosys: Good question - you have to remember that this book was written by ancient Chinese monks, long before the Internet was invented by Bill Gates in 1996 and bundled free with Windows 95. In those days the role of score estimator was given as punishment to any monk found guilty of unclean thoughts. During the game he would periodically shout out his own idea of the scores, while the assembled crowd would jeer and laugh at him. I suspect his role as estimator was left out of the book due to the distraction of constant heckling from smaller monks, who would frequently shout "Oi black, resign!" or "that move was small" before lying down on the floor and rolling around laughing.

Cheyenne: Yes -- there are appendixes for the different Go servers, the book has sections that cover some of the more popular servers; the "Kibitzing Go Server", "I'm Going to Shout", "Yet Another Hollering Online Occasion", and "Diatribes Are SucH Noise".

Fwiffo: I just got a copy of the second edition. There's a new section in the meta-kibitz chapter discussing the proper technique for mentioning Get Strong At Kibitz during game commentary. It was a topic I initially found quite challenging, but the book has really helped me conquer this technique. It's really the Nuclear Tesuji of kibitz.

rubilia: This issue better should be dealt with distinctively at Get Strong at Referring to GetStrongAtKibitz?.

WillerZ: I found that in the second edition they seem to have taken out a lot of the real-life kibitzing techniques, such as head shaking and the sharp intake of breath. I can't help but feel this is going to have a negative impact on the kibitzers of the future.

NoGenius?: The guy who runs the go club I go to's favourite is "(that was) all you could do."

Dave Special thanks to holosys for the most important addition to SL in some time. A "page of the month" candidate if ever there was one!

zazie : this is a book from the great autor Funny Delmann, who's french

RetroGen : Can't stand to not paste best example of use of this book ;)

inte: For what it's worth, white actually won that game. The 'White resigns' was the scribe's mistake.

sloppy: A MUST. Still i would like to remind you of recent developments in the world of kibitz, which is international standardization (iso-kibitz / isk), will there be a second print?