Born circa 1300 B.C.E., Ti Ts Shu is thought to have been the greatest professional player of all time. Fortunately for Go enthusiasts, Ti Ts Shu was born in the Shang dynasty, the earliest Chinese dynasty for which we have written evidence. Due to Ti Ts Shu's dominating abilities, records of his exploits were made, some of which to survive to this day.

Raised in Ch'eng tzu-yai, Ti Ts Shu began his study of Go at the age of 3 months, due to his father's belief it was never too early to learn to play Go. By 6 years of age, he was already the strongest player in his surrounding area, and by the time he was 9, he could give any opponent a "fistful of stones" and still thump him soundly. Shortly after his 9th birthday, he was offered the chance to study with the greatest master of the time, Ba Zing. Ti Ts Shu accepted a position with Ba Zing and began to study in his academy.

Although Ba Zing and his contemporaries were stronger than Shu's usual opponents, by the time Ti Ts Shu was 15 he was able to give his master a 6 stone handicap and showed no sign of slowing his incredible progression in Go. Shortly after Shu's 16th birthday, Ba Zing made Shu the academy master and left to start a new academy. It was likely this sudden disappearance that led to the Ti Ts Shu legend.

Legend of The Dead Heart Tesuji

Ti Ts Shu's exceptional strength has been attributed to supernatural causes. According to an ancient legend, Ti Ts Shu had a bitter rivalry with another player, Ba Zing. Both players could hand three stones to any of their contemporaries, but neither could claim superiority over the other. After dozens of games, the adversaries agreed to one final match. Ti Ts Shu went to live alone in the woods for months to meditate and prepare for his life's greatest game. On the appointed date, Ti Ts Shu appeared with a triumphant smirk on his face. Facing his opponent, he grimly declared "If you play me today the life will be taken from your go forever." Not one to back down, Ba Zing defiantly placed his first stone. The game was a vicious one of entangled dragons clawing desperately at each other for eyes. In the end, however, the match came to a massive ko. Ba Zing looked at the gathered spectators and at his arch rival in triumph, for, as the commentators agreed, Ti Ts Shu was shy exactly one threat. Ti Ts Shu looked across levelly and spoke: "You think I can not win this ko." As Ba Zing nodded his assent, Shu lunged across the goban, striking Ba Zing with incredible force. With a growl, he pulled out his opponent's heart, and to the shock of the gathered crowd, proceeded to eat it! Then, as the blood dripped down his chin, he placed his final stone on the board: a tesuji nobody had seen, allowing him to win the ko and the game. After that, Ti Ts Shu's play was said to contain the power of Ba Zing's go as well as his own, and none could come close, even with a handful of handicap stones.

While it is unlikely Ti Ts Shu was ripping opponents hearts out and devouring them, there is little doubt he was a master far ahead of his time. It is estimated that if Ti Ts Shu were alive today, he could give a top pro 4 stones and still have a reasonable chance to win the game. Needless to say, pros want to study his games, but all of his games are secretly kept and guarded in China, to be studied by their own pros to give them an edge. It is rumored his play is so advanced, the pros who do have access to his games don't get much benefit, much like a 10k watching a 7d play.

One of Ti Ts Shu's games somehow managed to find its way out of the secret vaults in China. Unfortunately, only the fuseki and final moves are available. 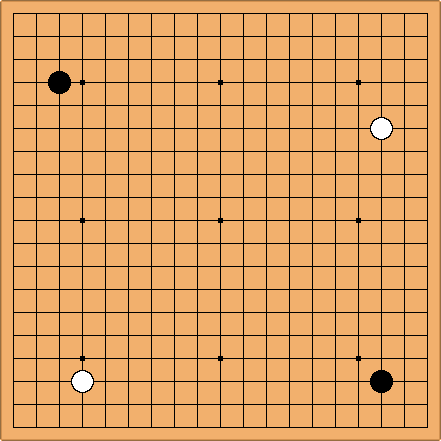 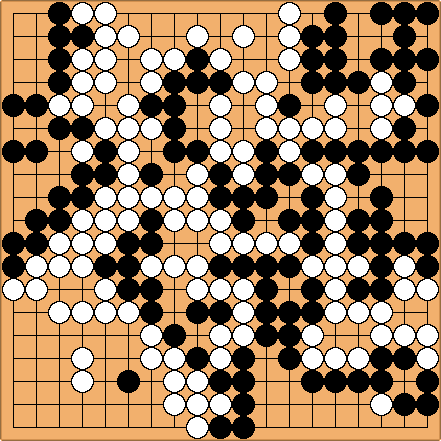 [1] Historians are wondering ever since how the missing 11 black and 13 white stones left the board.