This is the first Influence Go game on Sensei's Library. 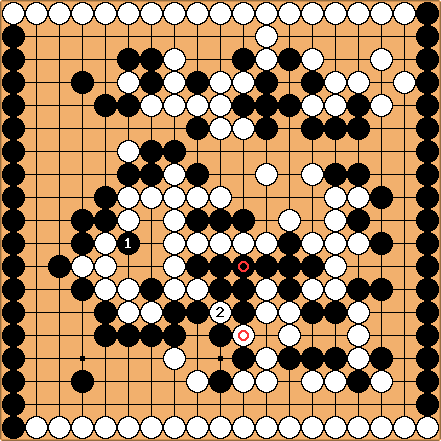 was the best I could find.

Klaus: Well I was just stupid enough, to overlook the atari!!!

Thanks for the interesting game!

( Neil: For what it's worth, I nearly jumped in and played

I just wanted to point out that the black stone with a circle is the head of a B2 Bomber. 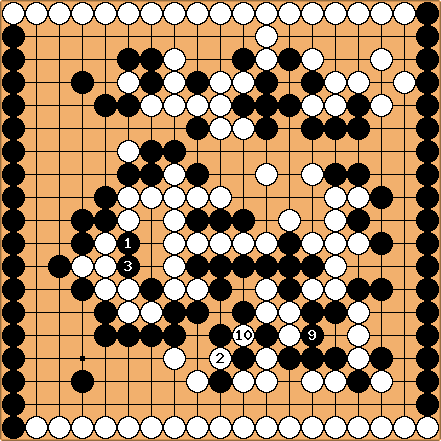 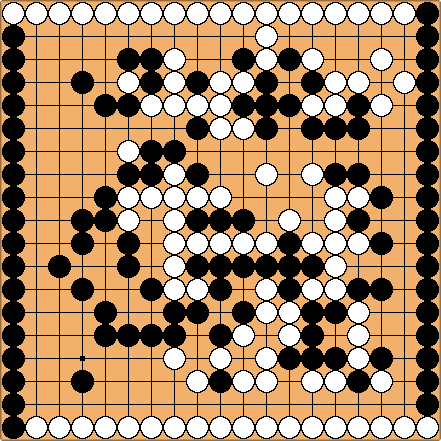 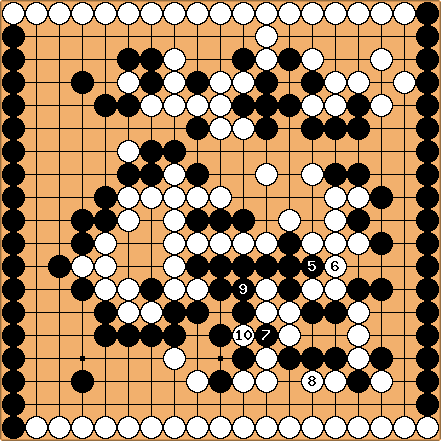 Black has (at least one) lokal threat too! Of course it is not simple, but at least black is not going down without putting up a fight!

(Okay, now I don't need to answer any ko threats) 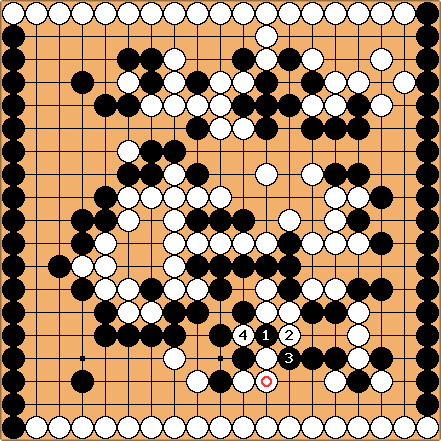 . Maybe the Ko will ofer some chances to catch up. I guess white should not have allowed that, to win for sure! or: KO; KO; KO; AS I LEARNED ON GetStrongAtKibitz

let's see, if black can draw some blood from that... Winning the Ko will be enough, or a thrat worth more than 10 points might make the game close.

(not so simple, we have local ko threats) 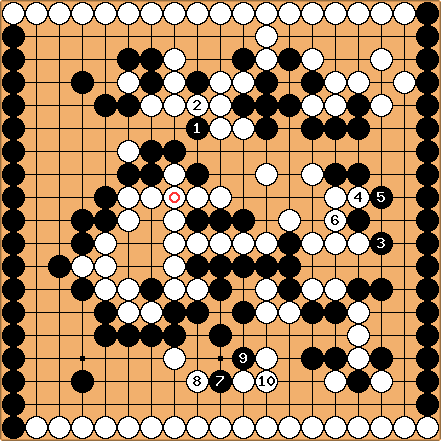 , (Your count looks right. I think this game was decided when after the awkward 3 black tenukied to play 7)

(Sebastian:) You mean, in the opening? Sorry about that, black team!

PurpleHaze: Well 11, 13, and 23 gave black a fighting chance. I guess this means 22 was wrong and should have prevented any move around 23 so as to capture 3 and 19 securely.

Then 102 and 104 threw away sente and some aji, consider what the count would be if 102 had been somewhere useful, perhaps at 115.

White got outplayed in most of the fighting but was always able to use the aji to switch fights. This is why I think the losing moves were 3 and 7, black was always forced to fight at a disadvantage.

Klaus: I think B 63 was a big mistake! black lost all winning chances here. I misjudged the fighting strength of the resulting black bamboo: It was verry small near the initial white wall! So i think that just blaming the beginning is to simple. (I want to claim the losing move for myself!! :) ) And a new move:

. Yes, 63 was bad, better at 64 saving the three stones. At which point I was planning to play 64 around 71 or probably the adjacent hoshi. 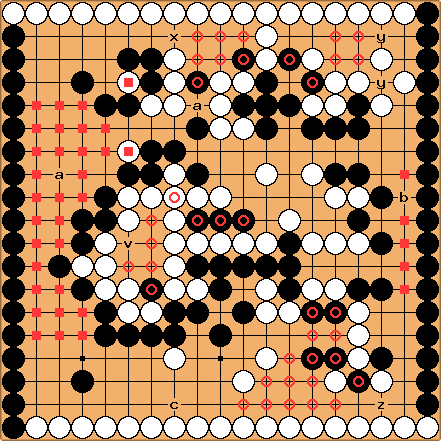 black still needs a lot at b, and white will get some points at c. Should black resign? I did not, simply becouse I want to see an influence Go Endgame. 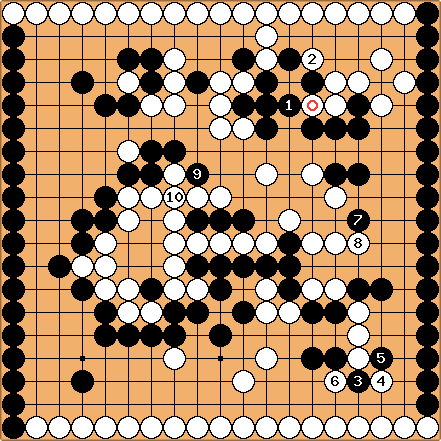 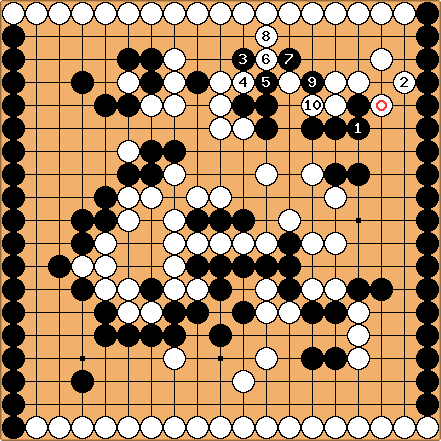 OK, one more! But now I have to go back to work!

, Nice to have you back in the team! 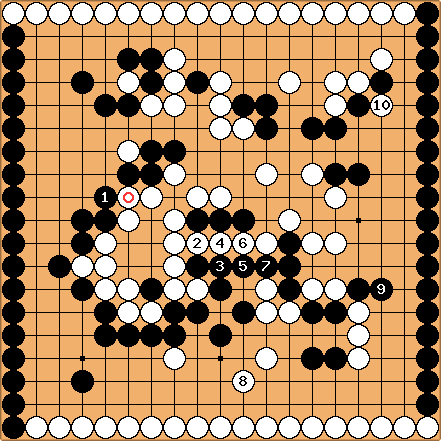 Hikaru79: Is anyone allowed to make moves in this game? ^^ If so, then

is mine. Else, please feel free to delete my move if this is a private game. :)

Klaus: actually, we have been waiting for others to make moves for some time! Sebastian made some, but that is loog ago... Welcome to the game!

asks which stones you want to capture...(and I hope for someone to join black too)

would have been interesting, but it doesn't work)

must be played now.

: Interesting yose. Some bad aji there, so I'll just patch it up :)

Klaus: Now we have 3 white players, so I will definitely wait for someone else to make a black move! (much later...): Hmmmm. seems like i got to add a move myselve soon. :(

OK, I'll make a move. Let's see what kind of monkey jump we can make under the influence. And thanks for bringing Black out of the doldrums. 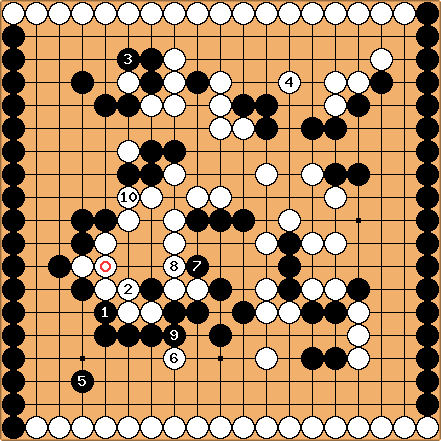 , (Thanks to PurpleHaze for makeing all the new diagrams!) 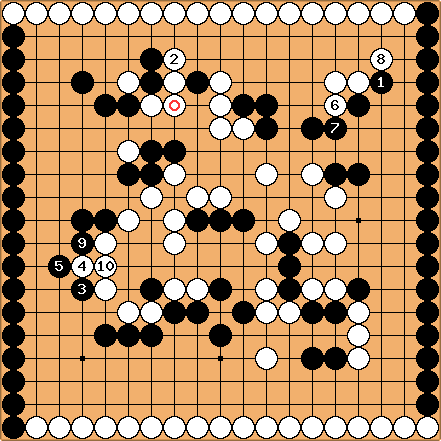 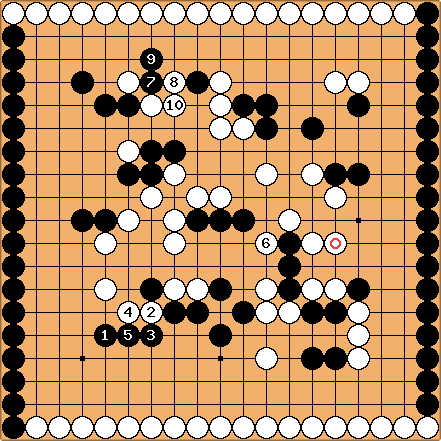 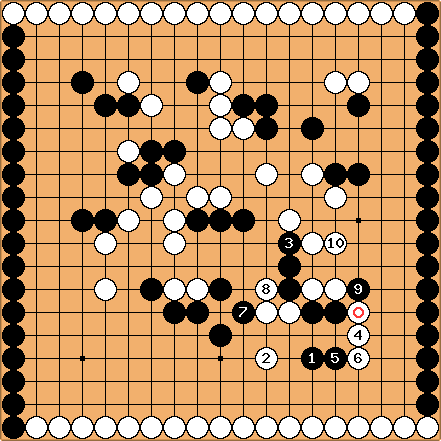 (my guesstimate: white ahead by 7, plus sente, minus some bad aji. Klaus: How on earth did you count that?), 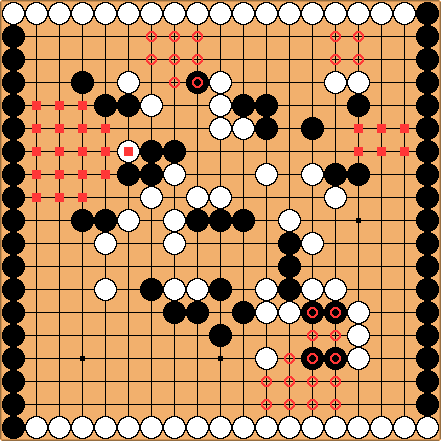 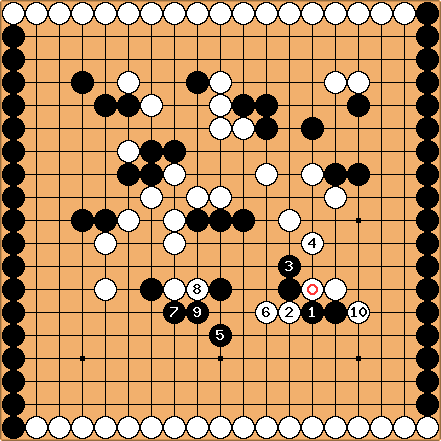 at least, this is bad shape for white.

now black is realy in danger.

. On of blacks problem is, that the stones at

can't be considered to be weak! (PurpleHaze: have to love that influence!)

, still being pushed around.

(I thought you would attach above 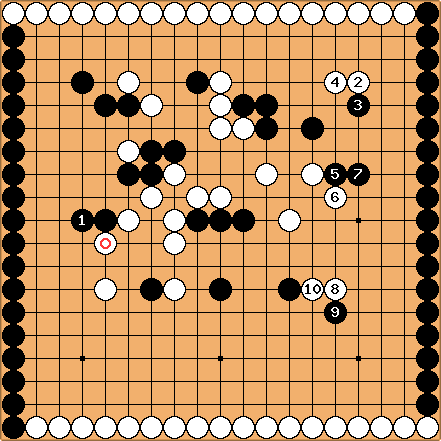 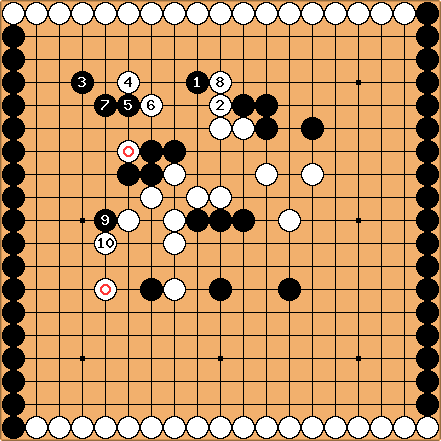 - Who's afraid of the White Wall?

Why hwere? Well first, i like Hoshi! Second, it`s at a borderline of two crossing influence sections and tird, I am trying to meke territory....(stupid me!)

PurpleHaze: Territory? Aren't those the points under dead enemy stones? 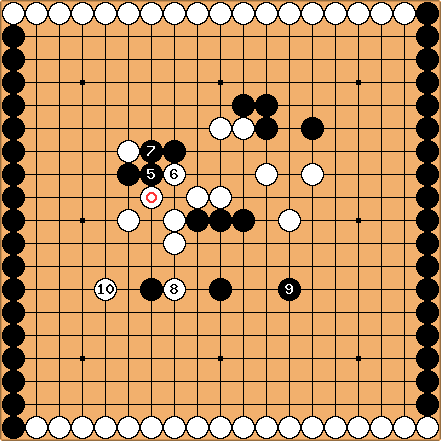 - let's make the best of our influence. Long live the Western Wall!

- I don't really like this heavy play, but I have to stick it through now.

, it really doesn't look good for Black anymore. Black is divided into four struggling groups, while White is almost completely united and has good chances to connect the bulk of his stones with either wall. I don't see an advantage that would compensate for it, either. Maybe I should resign. But I'llstart the struggle with the group that's most oppressed. I hope I'm not reaching too far out with

PurpleHaze: Every one of Blacks groups has a connection to a Black wall, realistically Black has two groups to Whites one, 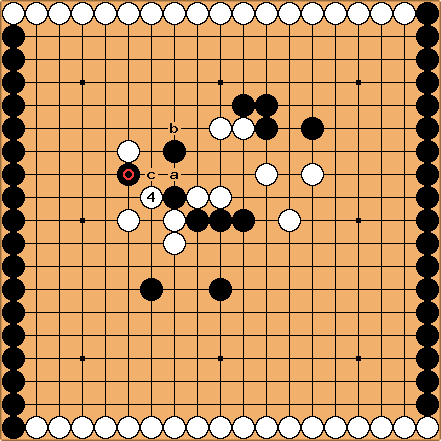 (Sebastian, reminded of the Economist's cartoon where Bush, sitting in a car, fatally crashed in a chasm between Israel and Palestine, triumphantly holds up a map with the words "The roadmap is still intact!":)

- Let's try to return to the main path so we can fulfil the sibyllinic words "makeing miai pf".

(Sebastian:) Actually, may I retract this move (at a)? I realize now that I wouldn't know how to reply to

@ b, and that the connection to the western wall is deplorably weak.

PurpleHaze: If I happened to reply to

(Sebastian:) Still, I'm not good enough to know how to link to the western wall. Sorry if I'm a chicken.

(Klaus:) Hey, Sebastian! don`t chiken out! Play anny move you like! You may or may not decide to sacrifice a stone, it will be interesting in anny case. Feel free and try out. Nobody here can calculate to the end. May the force be with you!

(Sebastian:) OK, I'll think about it! 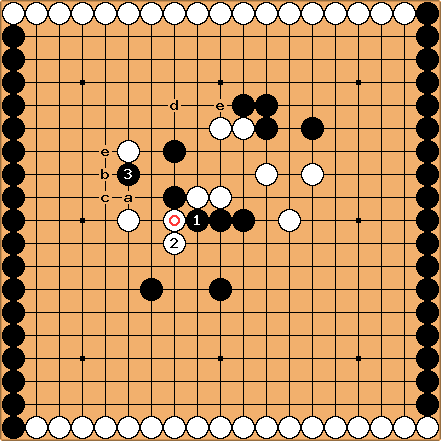 Klaus: Adding a new page was a good idea!

, we seem to be the only ones playing

) but we are using the scattered stones, others presented us with at the beginning!

By the way, I might be offline for some time, so I suggest Sebastian and all others to make some black moves! (I feel so lonely here, out in the center, faceing 2 enormous white walls...)

My "plan" was to build a Table with a in order to cut white. If white responds at b and c, I wanted to play the ikken tobi at d, makeing miai pf the two points at e. However, this plan mus surely be altered, and white usually never plays the way I thought he would. 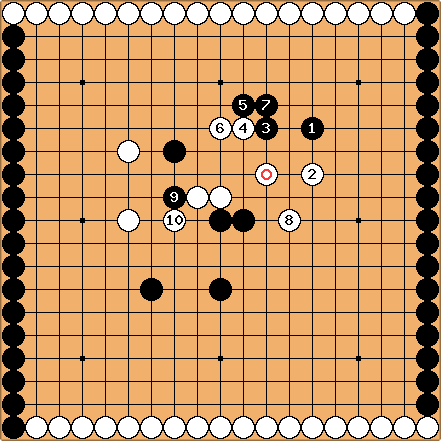 Klaus I decided to join the black side with

(maybe this move is to risky, so close to whites enormous thickness, but let's find out!),

I rearranged the page, so that we kan find the actuall position at the top.

PurpleHaze: Makes even more sense to have its own page, so I made it. 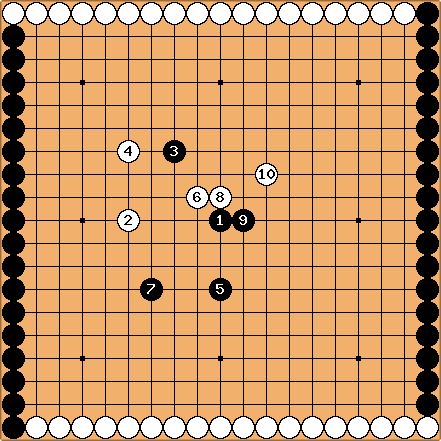 were by an anonymous player.

Trying to attack W's weakest group. Please feel free to alter my moves - I'm probably one of the worst players here. If you do, pls add why they were bad. Sebastian 2003-09-18

Anonymous: Isn't this game going to play like "Hex"? The first person to connect opposite sides of the board is likely to win?

Hex is a nice game, but we don't have to play like it. Although, it's an option if W decides to start a mojo in the northeast.

C'mon evverybody, please join in! This is an open game where anybody can make a move. Sebastian 2003-09-19

: Pushing like this looks good to me. Alex Weldon

Yes, it does. Tenuki at

may not have been such a good idea, since it made no use of