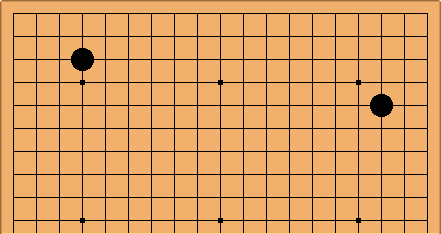 This is a fairly unpopular formation in professional games, though like everything else it is tried. 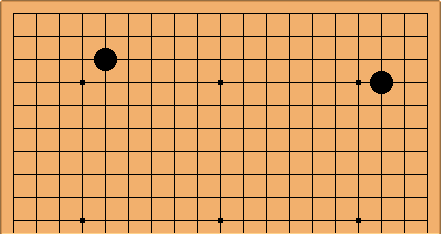 This is somewhat more attractive. 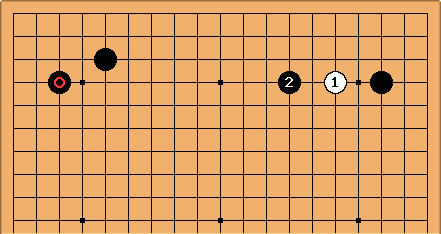 From Formation B, Black can enclose the left-hand corner with

, and then play a pincer when White approaches the other corner. The pincer does co-ordinate with the enclosure. 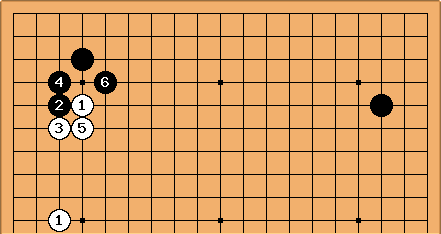 It is harder to see into the future for Formation A. Suppose White approaches high in the left-hand corner, like this. 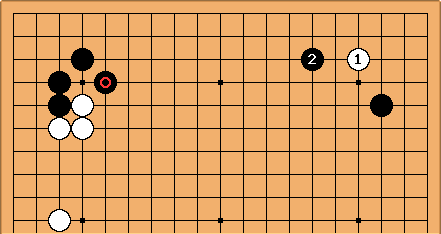 And suppose also that White later approaches the right-hand corner as shown. Then

is an ideal pincer, to co-ordinate with

The fact is that this type of good development from Formation A is quite remote. White could approach the left-hand corner low, instead. Black cannot develop an ideal position quickly, so it ought to be enough for White to live on the edge of Black's side.

Dave Sigaty: Charles, you keep raising interesting points that beg to be tested with the databases. However, it always seems to be like peeling onions - layer after layer and the results make you want to weep! :-)

To take formation B first... 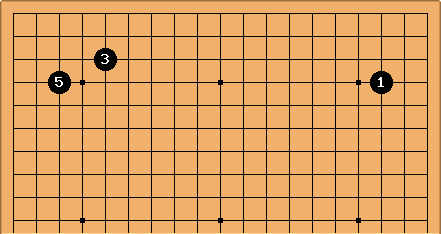 The natural comparison is to this formation 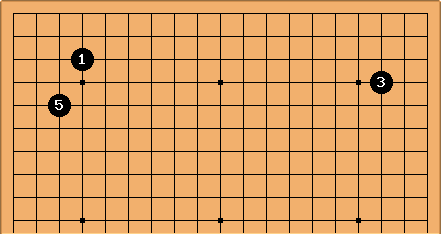 Here the experience with Black is reversed. In 766 games Black wins 55% and White wins 44%. There are 37 games where White allows Black to continue here. Black wins 26 of them. I think that we can reasonably describe this as one of the basic positive examples of coordination between the corners. From this we can easily see why the previous development from formation B is less successful.

An interesting example comes from the career of Kato Masao. He is a proponent of formation "B developed". Of the 180 examples cited above, 46 are from Kato's games as Black. Some stats for Kato as Black as shown in the July 2002 GoGoD CD:

Charles Matthews I don't think there's any big secret about coming up with points, on opening (fuseki) theory. I spent much time classifying fuseki patterns a few years ago, and there is no shortage of phenomena that at least raise questions. I find the Chinese and sanrensei relatively dull in a 'high-concept' way - the strategy is accessible to a five-year-old, though the techniques are interesting. Therefore I've looked around at what else there is. Some patterns go to make satisfactory magazine articles; for others, the material is sparse, or harder to interpret, and can make up a 'conversation piece' here in a natural way. I'd normally tend to present such things without trying to prove any case, though I mostly check conclusions with a database.

By the way, for Formation A, the striking example as far as I'm concerned is Takagawa-Sugiuchi Masao in the first game of the 1954 Honinbo match.

Dave Sigaty: First, in terms of this page I think that this game has to stand out. Shuei sets up both Formation A and Formation B with his first 3 moves in a game against Shuho. Needless to say, he loses the game. :-) 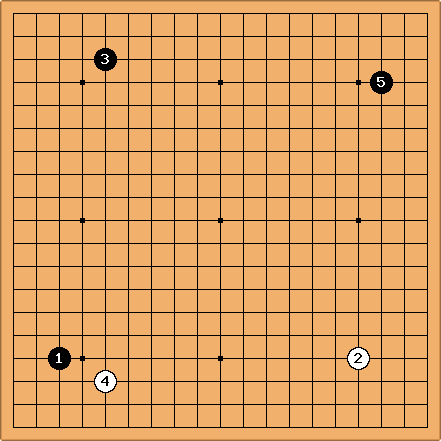 HA, HA, HA! Eh? Hmmm... So my little joke says more about the shallowness of my research than it does about the issues in coordinating corners you say? :-( 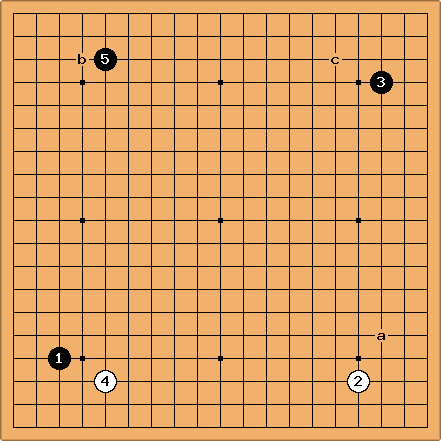 This diagram shows a related formation with 2 on the 3-4 point instead of the 4-4 above. If White 4 is played at b we have the Regulation Fuseki (honpou no fuseki in Rin Kai Ho's Fuseki Dictionary; the English name is from Appreciating Famous Games, game 5).

Although the regulation fuseki gave good results for White historically, in 15-20 percent of the games White avoided it, mainly by playing at 4 here. This left Black with the question of whether to take the empty corner and, if so, how best to exploit it. Up to 1850 Black most often played 5 at a seemingly in order to avoid allowing White too much initiative on the lower side. The second most frequent choice was this 5, transposing into Shuei's 1, 3, 5 above. After 1850 Black began to play 5 at b transposing into the Shusaku Fuseki. Nevertheless 5 continued to be played occasionally. In a total of seven games in the GoGoD CD where this pattern arose as shown here, Black scored 6 wins and 1 jigo!

In stark contrast there are four games in the collection where White played 4 at c in the opposite corner (a much rarer move than White 4 shown) and Black replied with 5. White won all four games. Are these results essentially random? This is always possible with so few games. Are there relationships between the sides after 1, 3, 5 that are sufficient to overcome the issues between 1, 5 and 3, 5? Are the relationships such that they work better against White 4 above than they do against White c instead? 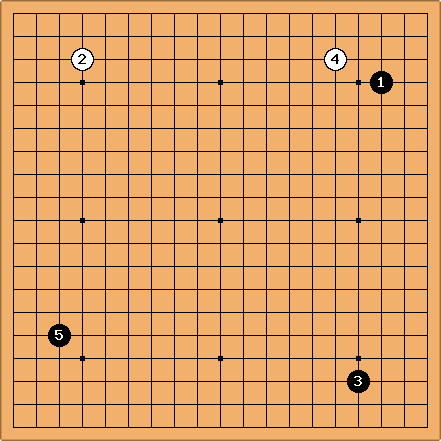 There is another set of games where Black sets up formation A along the bottom by playing Black 5 in the Shusaku Fuseki to this 5-3 point (there are a number of variations in the placement of White 2 in the actual practice with this Black 5). We can imagine that this is basically aimed at limiting White's (enhancing Black's) options in the upper left. The question then becomes the relative improvement in the left side potential versus the cost along the bottom side. In the collection this was a relatively successful though rare strategy with Black winning 9 of 13 games.